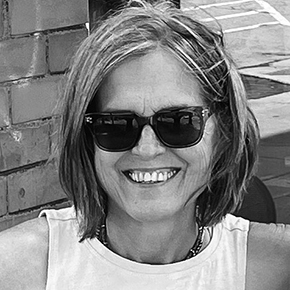 Alison Clement’s essay in this issue is from her memoir in progress, the writing of which has led to much questioning of her past decisions as well as philosophical handwringing about the meaning of an individual life in this time of climate crisis. She lives in Oregon with her family.

I know now this is the most dangerous time in an abusive relationship: right before the woman leaves. It’s when some women get murdered. I was lucky.

I got the call in the middle of the night. I dressed fast, expecting Parker to wake up any minute and make me come back, but he didn’t. It was summer, and the air felt warm even at 2 AM. I made a cup of coffee and walked down the long driveway to the road. Julie was giving me a ride, but she’d never been to my house before. Nobody ever came there to see me.

I first became interested in alternative health practices as a teenager, when I began practicing yoga. I was also a drug user. My father thought this was a contradiction, but I said they both were about feeling good. When I took speed, it was easier to get into difficult yoga positions — although I didn’t have the patience to hold them for very long.

The Man At Table Five

Fanny had a shit list, and we took turns being on it. It was completely arbitrary. One minute you were Fanny’s pet. “Why can’t the rest of you be more like Ralph?” — the waiter with bad teeth. “Now, there is someone with his head on his shoulders. I’m going to make Ralph the manager.” Next it was “I don’t know what the hell’s wrong with Ralph.”

I had thought that watching them carry Angel out the door for the last time would be the hardest part to bear, but then they picked up the lid and put it over her again, and her father reached into his pocket and pulled out a nail and began to hammer it in. Usually hammering is a good sound.

I work in the library of a low-income public school. I can see the kids are interested in war. The boys check out all the books about World War I, World War II, weapons, spies, codes, guns, castles, and knights. Boys without fathers are especially interested in combat.

They Always Call You “Miss”

There’s more to waiting tables than you might think. It takes courage, for one thing. You walk up to a table, and everyone turns to look at you, as if you’re about to deliver the opening line of a play. You have to look happy all the time too.

I’ve been in the hospital four days when they put another woman in the room with me — an old farm wife from Beardstown, by the name of Trudy Deere. Trudy Deere has been in a car accident. She’s recuperating.

Years ago, I wrote a little essay that appeared in the Readers Write section of The Sun. The theme that month was “Being Wrong.” I wrote about all the mistakes I had made in my life, how tired I was of looking back and feeling embarrassed and angry with myself for having been so wrong in the past.

I look at my kids and my husband and think of all the things we are together, and I think, isn’t it odd to be willing to risk all this so I can fuck some guy who washes dishes and whispers nasty things in my ear?

July 1994
Thank You Your donations helped to keep our ad-free, nonprofit magazine in circulation last year, funding everything from production to distribution. Learn how you made a difference last year. Learn More