This house, when did it become home? It’s hard to say. So many things have no beginning. We love someone; the love just grows. When did it start? What hour of what day? Children stop needing us; the car gets old; time moves on feet always moving. Only watches stop. Only rare days stand out, like high waves from an endless sea.

This place has its sounds like a heartbeat, so regular they’re ignored: the birds outside, a dripping faucet, the refrigerator’s moan. When did they become so familiar I stopped hearing them? The smells of fresh bread, of garlic and curry, of clean laundry in a heap — when did they make the air their own? When did the lungs of the house fill with our sours and sweets and make the house a home? Spring is here again. Like last year and the year before. Norma is in the garden, putting seeds into soil she’s fussed over since Fall. The soil is home. The little patch of sky we see between the trees at night, tonight’s full moon when it rises over the giant oak — this is home. The neighborhood, pleasantly boring, house after house not much different from our own — this, too, is home. Sadly, it may not be for long.

I moved here four years ago. Before that I lived at THE SUN office for a year and a half. The office became home when my last marriage broke up; I was still supporting my ex-wife and children and couldn’t afford my own place. The back of the building was where I lived, the front was where I worked, but it was hard to keep things separate. I’d never been good at it, constantly breaking promises to myself not to bring work home — and each night bringing home enough to last a week! Now, notwithstanding my loneliness and remorse, I was, for a workaholic, in paradise — and I stayed drunk. What else was there to do? I had no yard, though I surrounded some weeds out back with a fence so the children, who were with me each weekend, would have a place to play. It was a valiant try, and pathetic: no shade, no grass, the traffic louder than the birds. My kitchen was a hotplate; I used it to advantage. But the office still smelled mostly of ink and paper, coffee and cigarettes. It was home, but barely.

Regularly, I’d read the ads, or drive down back roads looking for a house like the one we had lived in for $75 a month. What a find that was! It needed work — the pipes burst each winter; it was drafty; the kitchen was too small — but for us it was perfect: the view, from the porch, of fields and woods; the pear and cherry and persimmon trees out back; the house itself, its old logs notched and fitted with care a hundred years before, the stone chimney, the old tin roof . . . how gloriously run-down and Southern, an old shack in our parents’ eyes, but to our way of seeing a part of history made home, where we made history: married there, among our friends; both our daughters born there; and bitter history too, an end.

Such places weren’t easily found. But there was nothing else I could afford — even small apartments in town were too expensive; besides, who wanted to listen, through thin walls, to other people’s arguments and love-making? Better the Rosemary Street traffic, the rebel yells at 2 a.m. when the bars down the block closed. Better these rooms I cared about than a “unit” no one cared about, in which individuality, like trash, was disposable. I gave up looking.

Then I heard that a friend was moving from a small, two-bedroom house in town, with a big yard and a playground nearby. The rent — $90 a month — I could afford. The white frame house was as old as I, built, with all the other houses on the block, during a construction boom at the end of World War II — a duplex, or what we used to call a two-family house, shaded by big trees, at the end of a quiet, dead-end street. The owner, an elderly woman, lived alone in the other half. As a landlady, her philosophy was simple: make the tenant happy. This, she said, meant keeping the rent low.

I was home, again. True, a thin wall separated each half of the house, so I sometimes heard Mrs. Blake’s television; but that was a small price for the privilege of being her neighbor. Often ill, barely able to walk, she was, nevertheless, unaccountably happy. We never talked about it in so many words, but to me, it seemed, she’d learned to accept life. Of how many other people, sick or well, can I say the same? She’d sit for hours on her porch, drawing to her, because of her great affection for them, the dogs and cats in the neighborhood, and always the strays. She delighted in my children, though she sometimes got their names mixed up. I saw her leave home only twice in four years, and the second time was in an ambulance last Winter, after she had a stroke, but she never complained about her health, or about being alone, though she cherished visits and any small act of kindness. Norma once brought her flowers and she referred to it for months. I dropped by less often than Norma, too impatient to listen to her same stories, which she’d forgotten she’d already told me. How many of us tell the same stories, though? We imagine we’re saying something new, or, if we’re listening, pretend we haven’t heard it all before. Does it matter? Maybe kindness is all that matters. When I remember the oldest story — that we’re all born, usually with great difficulty, to live a difficult life; and that we’ll all die — I wonder at what we make more important than kindness: ambitions worldly and spiritual — a bigger house, a more cosmic consciousness. Better to pet a dog.

After several weeks in the hospital, Mrs. Blake died. Now the house is up for sale. There are buyers interested; it’s a good investment property. Someone could spend a little on repairs and raise the rent substantially — to three hundred a month or more, I’d guess. To some, that isn’t much, but my salary has been the same for ten years, and Norma is about to start medical school; we’re rich in many ways, but money isn’t one of them.

So again I’m reading the ads, driving down the back roads — but what do I hope to find? This is one of the fastest growing parts of the country; when I came here twelve years ago it was hard to locate modestly-priced housing and now it’s harder. Realtors have grown more sophisticated and greedy; they sell something called modern living, available, at great expense, in subdevelopments and condominiums with ridiculously elegant names, like prostitutes who call themselves Contessa. As uncreative as they are costly, these houses don’t satisfy the most basic needs — for a balance with nature, for sunlight, for privacy. In a world where some people call abandoned cars and refugee tents home, what do we call this abandonment to luxury that hardly seems luxurious? To me, living in harmony with the earth is the real luxury. Quiet is a luxury. Feeling truly at home in one’s home is a luxury. Frank Lloyd Wright said he could design a house that would make people get a divorce; what about houses that divorce us from ourselves, and from the rest of the world? There are many kinds of homelessness.

As with most things, I tend to romanticize: isn’t moving from a place, I say to Norma, like the soul leaving the body when we die? She nods distractedly; perhaps she’s thinking we’re not dead yet, and we can’t live in a metaphor. Still, metaphors about home swing open like doors, inviting me: in some cultures people build their homes in a day — they wouldn’t dream of giving it more time than that; I have friends who build for years, never finishing, or who dream for years about their dream house. What kind of dream is that, where happiness is always down the hall? Some dreams come true, earned with hard work and devotion. I have the dream myself, at times, of building my own home . . . but I have flying dreams, too. Even if I had the money I don’t have the time. It takes ten or twelve hours a day to build this magazine square and true.

Consider a trailer, some friends urged, or a double-wide. I considered the length and breadth of my prejudice: how could I — who once moved nine times in three years, who’s lived in New York and London and Spain, in someone’s garage and for a year in a van — be so horrified at the “rootlessness” of mobile homes, or appalled by their sameness, though my car and my clothes, the books I read, the paper this is printed on are mass-manufactured, too. Are trailers ugly? Compared to what? The houses made of tin and cardboard I’ve seen in Mexico? The slums of Harlem? Or do they simply fail for me as metaphor, these stranded ghosts of the great covered wagons that carried the pioneers across America, now pulled up in a circle in grassy parks, neither rooted nor rootless, since there’s no reason to stay, nowhere to go: sometimes the soul leaves the body before it dies.

In quiet moments, Norma and I know there’s nothing to worry about. Wherever we live will be home, if we keep love in our hearts. And if we don’t, what does it matter where we are?

Last week, we planted lettuce, spinach, and peas. Will we be here to harvest them? I don’t know. I don’t even know if they’ll grow. It might rain too much or too little; birds might eat the seeds. All our certainties hinge on uncertainties. Yet, knowing that, most of us still yearn for security, a long-term lease on happiness, some guarantee. So maybe we figure out where the next meal is coming from. How about the next breath? Is that guaranteed?

Now it’s late and Norma’s asleep. It rained before; outside, the water’s dripping, off the roof and the trees. It’s the first night of Spring. The wind whispers. Under me, the chair creaks. So like us, this house. I hear it breathe! Even the mute furnishings speak!

Yes, it’s like a body. The soul leaves, and there’s grief. 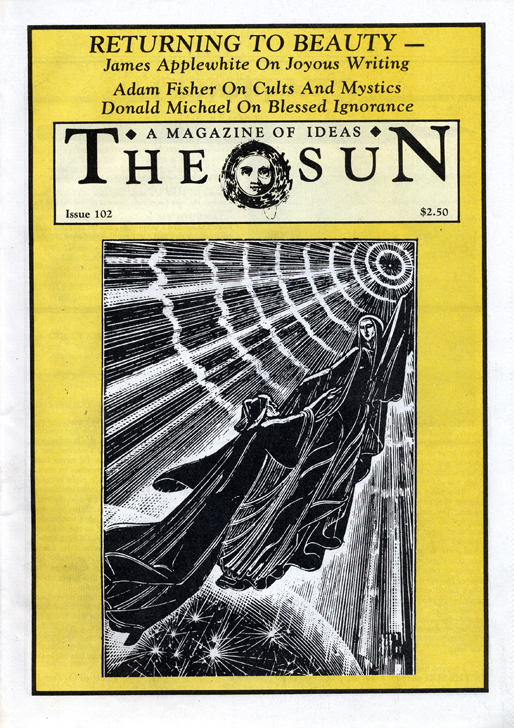 The Perils Of Publishing