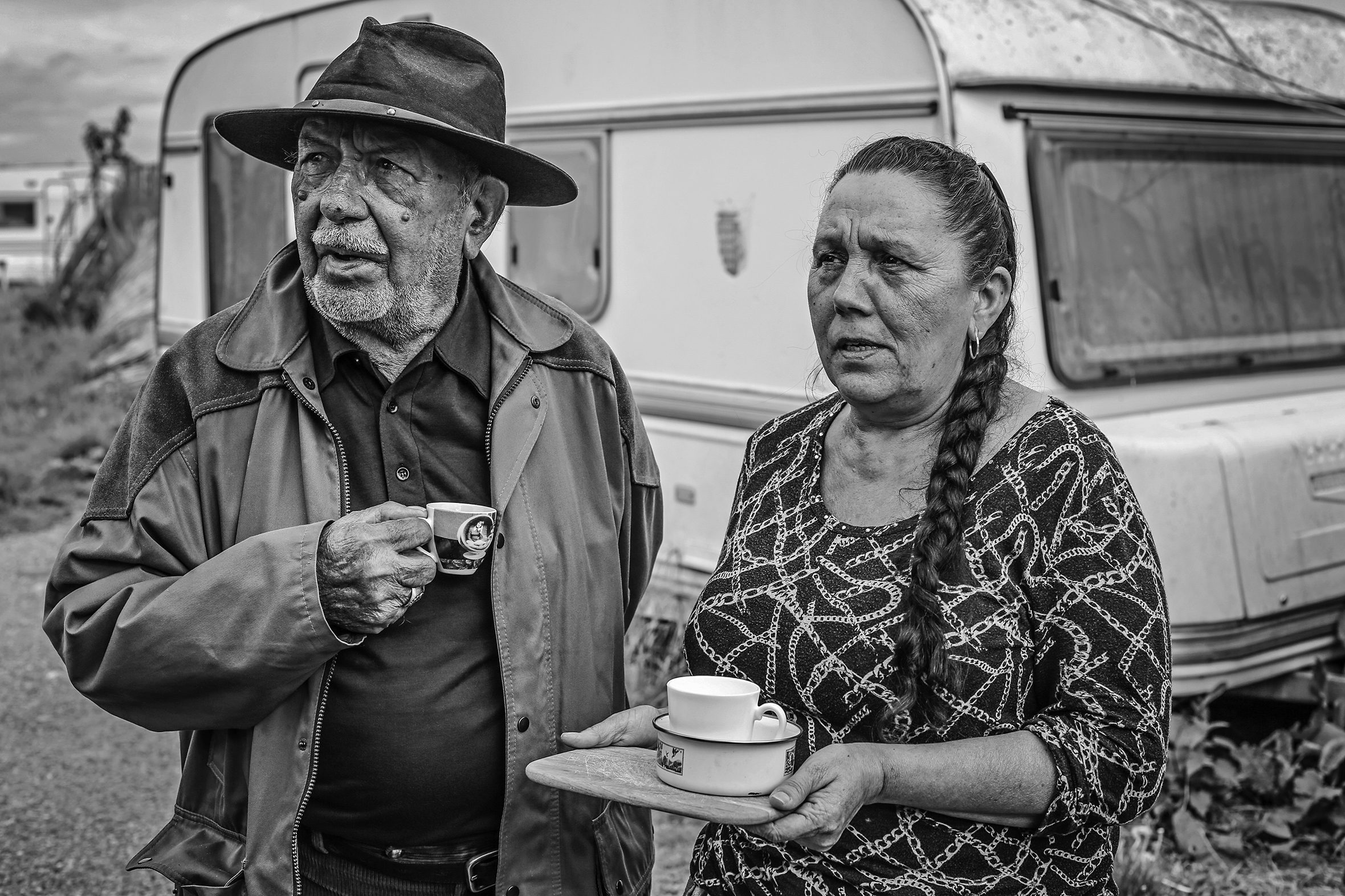 Fatis, eighty-six, and his daughter, Touroute. An elder of the community, Fatis could not resign himself to living in a conventional house. He passed away a couple of months after the destruction of the settlement.

Almost fifty years ago 170 Romani families settled in the Polygone district of Strasbourg, France. They parked their caravan vehicles and, over time, constructed homes on empty land near an airfield, often using salvaged materials. They planted gardens with walnut and fig trees and built outdoor ovens for barbecues. They erected a chapel in a corner of the outdoors, and their children played in a vast abandoned lot.

In 2009 I met some of the families while photographing them for two series of images about the Romani. Seven years later I returned to find they were facing the destruction of their homes. City officials had declared the neighborhood unsafe and unsanitary. The residents’ buildings, the oldest of which dated back to 1974, were to be razed and 150 new houses constructed in their place. These Romani would gain a higher standard of living but lose their lifestyle, with its emphasis on travel and communal closeness.

These photographs were taken in the six months leading up to the demolition. Among the youngest in the community, there were some who looked forward to a comfortable, modern house with an indoor toilet, but feelings of helplessness, sadness, and anger were common among older members. If they assimilated, they would become subject to government oversight and have to give up much of the freedom they valued most.

Who Are The Romani?

The Romani — also known as the Roma and, pejoratively, as “Gypsies” — are a people without a country. The name “Romani” comes from their word řom, meaning “man.” Their ancestors migrated to Europe from India in the fifth century and split into several distinct groups, each with its own dialect and culture. Whether by choice or because they were unwelcome, they didn’t permanently settle anywhere or assimilate into larger societies. Today the Romani often don’t have birth certificates or verification of citizenship, making them “legally invisible.” This makes their numbers difficult to count, but a rough estimate is 10 million in Europe and several million elsewhere on the globe.

For centuries the Romani have suffered persecution by both authoritarian and democratic states. They were enslaved in Romania until the mid-nineteenth century, and hundreds of thousands of them were killed by the Nazis. In the twenty-first century they remain the targets of xenophobic attacks and prejudice. If they are not deported, they are often pressured to give up their nomadic lifestyle and culture.

An Important Message From The Sun

By The Sun
One Nation, Indivisible