Women Writers: Out Of The Closet | By Judy Hogan | Issue 11 | The Sun Magazine
close

I have been struggling, mostly alone, with issues which are in many ways feminist since I was four and my father gave me a choice: a toy eggbeater or a book about Raggedy Ann. I freely identified with my mother’s domestic side and wanted the eggbeater. I also wanted the story-book. It was a hard choice because I wanted both so much and I was impatient with my father for putting it to me. When I chose the book, I knew I also chose the companionship of my father, his lap, and hearing the stories which I liked read many times over.

I have decided at least 20 times that I am not a writer. And another 20, that I am. I now accept that I am, though the work which I expend my major energy on, and take most seriously as an artist, is my diaries, and I may not publish them in my lifetime. I also write poetry, essays, reviews and these are more publishable and fit better into the accepted framework of what is “literature.”

I’m thinking a lot lately about what literature is, and why it is that I (and I now realize many other women I know) don’t feel comfortable with the novel form, even as loosened up by Henry Miller, Virginia Woolf, and James Joyce. I wonder why it is that many women are apparently in secret writing their hearts out, and hiding those writings, because they’re afraid to show them or don’t think they matter or don’t even consider them “real writing.” Ezra Pound said, “Literature is news that stays news,” and it strikes me that in our 20th century preoccupation with being modern, up-to-date, and novel we may have forgotten what literature is, what good writing is. It is possible that we are looking out there, over yonder, when we ourselves, or our sisters or mothers or daughters may be secretly squirreling away some of the most direct, honest, intense “news” around about what being a human being is — and not even know that it qualified as literature and might stand the test of time better than much that is presently coming out of the big N.Y. publishing companies. I have asked myself why these women are so sure they are not writers when their writings already exist, when people like to hear them and clap for them, and take them seriously and want them to write and read more? And why are they so afraid to stand up and read? And why do they need the nurturing environment of other women? And why does it help so much if I tell them, “Yes, that’s really good”?

I’ve known a lot of men writers, too — and we all need reassurance and reinforcement at times. But I’ve known men to take themselves seriously as writers when they had only written a few poems. And women who’ve written lots, for a long time, be convinced it was nothing, “just a hobby.”

I was slower than most to realize just how much culture affects us as women, how much our very feminine nature is used against us, our needs and vulnerabilities culturally and sometimes consciously manipulated to keep us in our places.

That place is what is now being openly challenged. I support that challenge. It is women who will have to decide, for themselves, and individually, who they are, how and on what terms they will serve the human race’s biological and social needs, the clues to which — our future — we carry in large part within us. Unless one sex ceases “manipulating another, I would guess we are, in this way, too, headed toward the end of our world as we know it. For there’s a big explosion occurring in many people’s lives, and it’s at the level of our relationship to what Jung called the “archetypes,” and what some modern poets have called the “deep images.” It isn’t an easy struggle, and it looks like it’s only beginning. It’s hard to say what set it off, but the wars of this century and the reality that men’s weapons are now able to destroy the planet itself may be in large part responsible.

When we are caught up in the struggles of our individual lives, it is very hard to see that others are similarly struggling and bewildered. I wonder how many people today wonder if they are sane. I think about it a lot. Yet I can’t imagine that such a question would have preoccupied my grandmother’s generation, though one of my grandmothers was insane.

We are so much more conscious of, and so full of doubt about, things we once just did.

I can look back on my life now — I’m about halfway through it, I’m 38 — and see that a lot of the reason I’ve suffered and struggled so much and refused to quit was that, unlike the dreamless women of the late 50’s whom Betty Friedan describes in The Feminine Mystique, I had an idea, vague but urgent, of where I was going, and I had a kind of Socratic inner goal that kept me struggling to be conscious, continuously, to keep awake and alive, and to understand.

So I have succeeded. And I have not openly pursued or latched onto feminism but I have come round to it through my journey to understand. It is not the total solution. But it is one doorway we who are becoming fully awake and alive human beings must pass through. We must become aware of how our helplessness has been and still is used against us, of how our very valuableness as carriers and nurturers of the seed has tended to frighten men and lead them into frightening and coercing us. A woman who simply lives, by the patterns and archetypes which have, by and large, “worked” all these centuries, is not in terms of human dignity and freedom and awareness and joyous self-discovery, living a meaningful life. She is asleep, not awake; she is, in Maslow’s framework, living at the level of deficiency needs, not at the level of possible peak experiences. She may at times be ecstatic, but she does not know why. She may at times be absolutely miserable and lonely, and again, not know why.

I think one reason why poetry right now is a form which is meaningful to a lot of women is that it is one way of expressing, naming, and releasing deep and inner truth that no one before has wanted to know. It was enough if she smiled — no one wanted to know why; enough if, when she cried, she could be comforted; no one really wanted to hear the words that those tears stood for.

It was interesting and frightening to me to realize, when I was supposedly mature, that the image which most terrified me was of being a rag-doll, a Raggedy Ann, to whom other people did whatever they wanted. No sound psychology is based upon a human being acting like a rag doll, yet our culture clearly is still pushing off this image — woman — and it is the rare woman who learns how to resist cultural pressure, and is not hurt by the battle she then undertakes, the new journey to selfhood, to living our lives from the inside out, rather than from the outside in.

One thing that has to happen is a real sense of psychological independence from men. She needs to know her own mind, to believe in her own ideas to have her own ideas. I don’t know why this is sometimes so hard, but it is. It is, I’m convinced, the hardest struggle of all, to believe in the accuracy of your own perceptions and to find valuable, human ways of articulating them, when they are new, and are not well spoken or sung or painted or composed before.

I have found that other women often know, quickly, exactly what I mean. They verify my perceptions. They consent, or if they disagree they still give me very helpful distinctions. This can be extremely comforting and reassuring. I believe this experience, more than any other, has provided the basic fuel for the women’s movement.

In the long run, I know of no way that we can, as a sex, as half the human race (though there will be individuals who stop at all stages), stop short of not only educating the men and helping them make the adjustment to what living with a mature woman, a fully human woman is like, but of loving them, and learning, again, and newly, to be loved by them, and again, valued for our “place” — but not just a “place” established by biology and tradition and by others for us. A “place” which considers and remembers those realities of the past, and yet is our own. A place we, within the constraints of our human and mortal condition, choose, accept and embrace — because given the meaning of life, any life, and death, the death we all owe, we are ourselves, and have a lot to give before we die, a lot to tell, a lot to nurture, a lot to share, a lot to build — nothing short of a new world, both within and without that persistent frame of “home.”

It’s a new home we must establish, and a new kind of marriage as well as a new literature we must write. In this period, we struggle so with life and death in the deep places in our souls, with sanity itself, that it is hard to build, even to envision the new. But if the old institutions are being washed away because they were built on sand, then I imagine that out of the rock-like strength of a whole new sense of selfhood, and of what being male and female means, we will build again. And then floods, whether from within or without, will not threaten us deeply, for we will have finally learned how to live with and accept ourselves, and we will be able to live well and consciously, as long as this earth bears fruit and the sun keeps rolling round, in season. 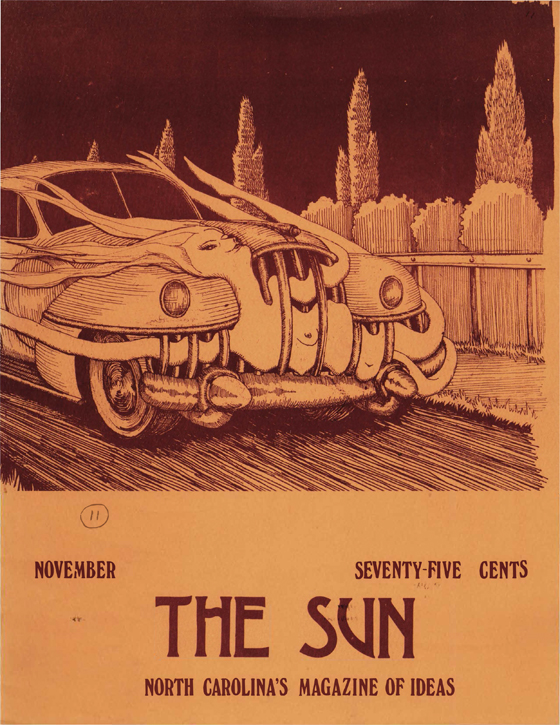 By Our Readers
Special Section