at midnight in the middle of the night one midnight i can’t get past this word midnight because what i want to tell you about is the most midnight i have experienced since sometime in the black-heart viet nam nights when i shook away one midnight when the wind blew in through the bedroom window reeking of children screaming/burning villages/acid:acrid napalm and i was faced with a skeletal apparition rocking across from my bed in a rocking chair

or i am beginning to walk around pantex atomic bomb plant

i climbed up a boulder which sat in the middle of the rock stream bed it was waiting for rain to come and fill up the canyon and rush over it as had happened many times.

at midnight we have been walking for two hours

the police cars cruise us every half hour or so are you going to walk all the way around? the sheriff leans out of his car window to ask the minister

no only half way around

we’ll be sure to watch the minister tells him

i watch the night lights of the plant

they are static like the stars not much action

barbed wire like that used to roll around my house

at our gate a guard in military uniform with a gun

my mother did too she had traveled more than he had in her growing up moving from one little town to another one in arkansas and oklahoma during the depression days when her father and mother were scrambling to feed four daughters doing any work they could think of — cooking, baking, cleaning, fixing — but she had grown up dirt poor and had probably not even thought it was possible that she could tour europe before the age of thirty courtesy of the military

WASHINGTON (AP) — President Reagan was quoted Sunday as having joked in a voice test for his weekend radio broadcast that he had signed legislation which “outlaws Russia forever” and that bombing would begin “in five minutes.”

Reagan’s comments were made in what the White House says was an “off the record” sound-level test on Saturday, before the president taped a broadcast on tax policy from his Santa Barbara, Calif., ranch.

A source insisting on anonymity told The Associated Press that Reagan jokingly remarked:

“My fellow Americans, I am pleased to tell you I just signed legislation which outlaws Russia forever. The bombing begins in five minutes.”

i am walking and beating this drum around this atomic bomb plant and i can’t believe it that this walk is making me think so much of my father it is like he is just over on the other side of the barbed wire in his military uniform — very tall with black hair like he looked when i was five years old in wiesbaden very striking before he got so fat and red-faced and started having heart attacks — and he’s walking along and yelling at me what the hell are you doing patricia? and he is angry and sad and crying and yelling at me all at the same time like his own heart has begun to attack him as it will indeed do when he is older and a wall of fat will surround all the reservoirs of his blood and his heart will stop working for him causing not death (because he is basically so strong) but a long weakness/recovery causing him to retire from the military and seriously reevaluate his way of life

it was time for the shift of workers to change — a bell rang somewhere acres away at the white buildings across the wide and clear field the cars of the workers began to make a procession out of the plant’s gate each car stopping for some interchange with the guards — smuggled bombs? no? thank you go ahead — then the workers’ cars drove on the road where i was ranging with others who were holding up signs for the drivers in the cars to read and some who were simply standing smiling waving at the cars

of course they are afraid we might throw rocks at them set their cars afire shout abusive words they can’t know what to expect and the man at his desk just a few minutes before that finding the sack cutting the eye holes thinking of the people at the gate he will have to drive through to get home fitting the holes to the places where the eyes can look through — what can he expect? maybe the people taking photographs of the workers posting them on telephone poles as the faces of public enemies retribution from some direction he had never guessed at for sins he had never been given the names of — for what? working hard at his job? feeding his family? why should he offer his face to the people to be looked at as measuredly as people look at police lineups — is it that one?

i know i know all my father’s way of thinking i know he has been trained to see that sometimes groups of people are sacrificed — yes, like in bombing a city — for the good of a larger goal

and since he himself was both a musician and also a military historian he taught me things early like the tune and the words of the song the piper and drummer played leading the army into the battle of san jacinto in the texas war of independence:

my father the musician began to hang out in bars with accordion and zither players while we were stationed in germany he learned to play along with them and to sing their songs in german they came to our house with their music cases and jammed with my dad in his military uniform sitting in a little circle together — du du liegst mir im herzen he learned to sing and play plus others lorelei drinking songs he traded them one for one with old songs from texas/tennessee — bully he’s the bully of the town. . . .

oh she groans and stumbles back a little

so what about bombing? like my dad used to say: i only want to learn one sentence in russian — “i would like to work in your officer’s club. . . .”

and we won’t need the blown-up shell of the earth anymore like a dried up pea hull when the stalk comes out no one needs the afterbirth after the birth right?

yes there is a certain hypnotism in watching the plant lights fastened against black night but a flash of mangled turtle and the sigh of someone in back of me brings me back to the road — how much longer do you think before the van comes? i glance over my shoulder to the gentle round face of an older woman who is being partly supported by a man and woman holding her up on either side she smiles at me apologetically for her weakness

and we enlightened ones will be pale spirits flitting around heaven i guess having a good time thinking oh well it doesn’t matter another little earth explosion down there in the galaxy a little spark in a heavenly afternoon like distant lightning the smell of burning flesh and hair (isn’t life on earth hell!) because there won’t be anything we can do anyway no bodies of our ancestors to call us into existence on any earth oh well pass the gravy

someone says what time is it? 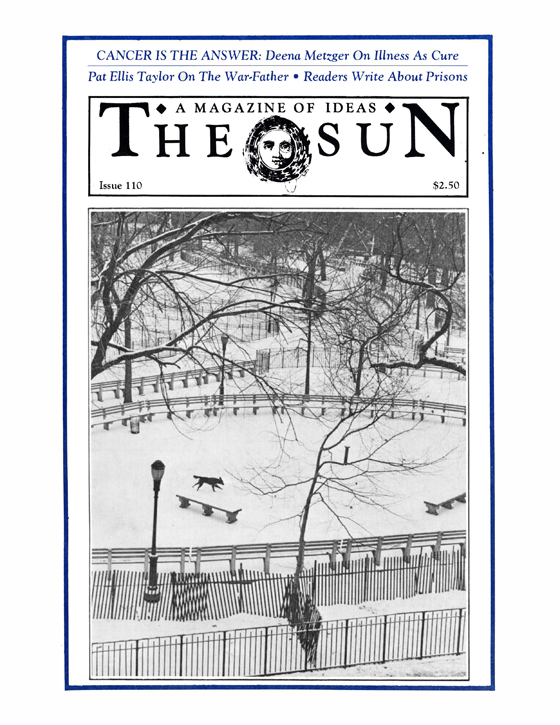 A Bell Ringing In The Empty Sky

The Best Of The Sun