The Party At The End

After it was over and the world was reduced to smoking cinders, there was a big party.

Everybody was there, absolutely everybody. I was a little late, as it took a while to brush the radioactive ash off my body, and by the time I arrived the party was in full swing.

In the way of party latecomers I bounced from group to group, and finally I settled on a cluster that had, at its center, Otto von Bismark expounding on all the thousands that had died in the Franco-Prussian War. Everyone was laughing and patting him on the back.

Then a voice called out, “Oh, yeah? Well, I’ve killed ten times that number, I have!”

There was a moment’s puzzled silence. Then Bismark roared in recognition, “Why, it’s Vlad! Vlad the Impaler!”

Vlad the Impaler stepped forward, smiling shyly. “And furthermore, I killed mine in aesthetically satisfying ways. For instance, there were two diplomats from separate German states who visited me during the middle years of my reign. One was a simple fellow, the other rather sophisticated. I asked the simple one what my people thought of me. He said they thought I was a bloodthirsty madman. So I had him impaled for speaking thus to a monarch. Then I asked the sophisticated fellow. He said my people loved me.”

“And I had him impaled for lying!”

Well, everybody cracked up. Everybody, that is, except for one woman who stood a little apart, glowering.

I whispered to Bismark, “Who’s the killjoy?”

“Florence Nightingale. A real pain in the neck, she is.”

Florence Nightingale said, “I don’t think that story is the least bit amusing.”

“I do,” said a voice. We all turned. The speaker was a sophisticated-looking fellow with a hole in his stomach where, apparently, he had been impaled. “I didn’t used to, but I do now.”

There was much hilarity, and many more stories of savagery and bloodshed, and after a time I mentioned, quite innocently, that I had seen the very end, and in the instant I had everyone’s attention.

I explained: “There was a bright flash of light, the most beautiful thing you ever saw. Then came a wave of heat. It was so painful it was almost luxuriant. Then I began to feel myself melt. And then . . . then I was preparing for this party.”

They were murmuring and smiling. It was perfect, the perfect way for the world to end.

But Florence Nightingale was frowning. “How horrible.”

There were cries of assent. From the other side of the room came the song:

And so we laughed, sang, joked, had a jolly time. After a while I noticed people were leaving. I was baffled. Why leave such a jolly party? But soon I began to sense that the party, in that ethereal way parties have, was fading away.

So I said my goodbyes, left Bismark and Vlad drunk in each other’s arms. I went to the door, took in a breath. I stepped outside. 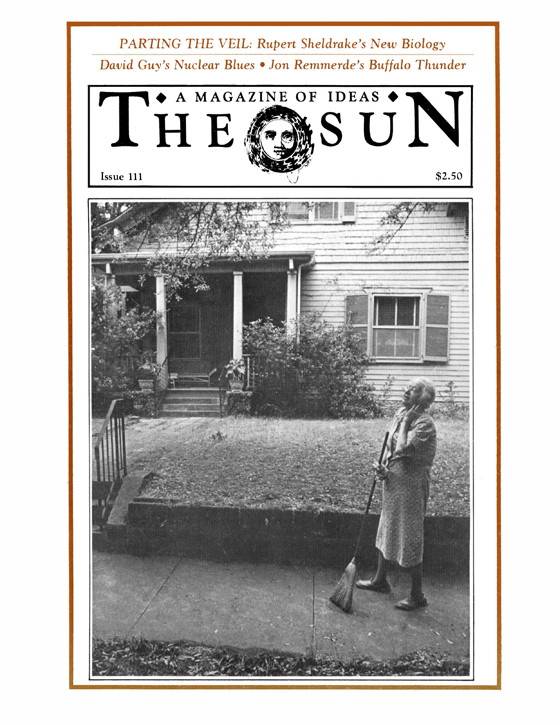 A New Approach To Biology

Notes Toward A Psychology Of The Nuclear Age