Krishnamurti At The Felt Forum

The ushers in red coats showed us to our seats. We’d paid eight dollars. We were six rows from the back. “I wonder where the six dollar seats are,” said Eddie. “Behind the wall,” I said.

“We should sit in the last seat in the corner,” Eddie suggested. “That’s what I always do at baseball games.”

The curtain moved and a tiny white-haired man wearing glasses and carrying a staff walked out. He looked at the crowd, which continued its animated conversation, and asked in a loud, timid English voice tinged with an Indian accent, “Shall I come back a little later?”

“This is extraordinary,” he said.

“Can one begin now?”

The crowd started to quiet.

“If you have come here to be entertained, I am afraid you will be sorely disappointed.” There was complete silence.

“You may have come here to hear a lecture, but this is not a lecture. We are here to engage in a dialogue with the speaker. The speaker may be putting it into words, but all of us are thinking together.

Like an English headmaster, he had put us in our place. He had the crowd’s attention. Gradually, he drove these tragic words deeper and deeper into our minds: we are what we are.

“Time is the enemy of mankind,” he said. A baby started crying. “Please don’t accept this. Consider this. The speaker is saying this. I am not a guru, thank God. The concept of time is the enemy of mankind. We say, ‘Evolution will solve this problem.’ But if evolution has gotten us to this point, why should evolution bring us somewhere else. It’s not logical.” The baby stopped crying.

“You can give in to despair and hopelessness. That’s a natural reaction. But that is just a symptom of the problem.”

Over the course of an hour, the audience became completely still.

“You must realize that every possible way of solving our dilemma has been tried and has failed. You have to realize this through profound meditation. You have to feel this not only in your mind but in your heart, and blood. Then you’ll realize there’s another way.

“We will continue tomorrow.”

He stopped. The audience slowly began to applaud.

“Please don’t clap. You’re clapping for you, not for me.”

The audience stopped clapping. They got up to leave.

A man behind us began his own lecture:

“In the early part of this century, Annie Besant, who was then the leader of the Theosophical Society, moved the headquarters to India and said she’d discovered the Messiah, the reincarnation of Christ. It was Krishnamurti. He was like seven years old, and he toured the world with her as the Messiah, like guru Maharaji. This was in the first decade of the twentieth century, which was like the Sixties — a flowering of the arts, a very free atmosphere. Krishnamurti spoke in Greenwich Village.

“There were splits in the Theosophical Society over him. Alice Bailey and Steiner didn’t accept him, and left the organization.

“Then Krishnamurti disappeared, for several years. He returned in the 1920s, and said there are no gurus, there are no leaders, and he’s been saying the same thing ever since.

“He’s never married. There are no scandals about him. He’s just a simple, clear man, who makes people think.”

“The show’s over,” said the ushers in red coats. “We have to close up.”

Outside, me and Eddie interviewed the man selling circus souvenirs, Dini Roche.

“Has anybody bought circus souvenirs?” we asked.

“Oh, yeah. Quite a few of them have. They’d say, ‘We’re going to the circus Sunday, the kids’ll want these.’ What is this all about?”

“Something like the Moonies or the Hare Krishna movement? Everybody’s been in too much of a hurry to stop and talk.”

Dini’s wife, Cherie Korf, came back with coffee and hamburgers.

“He says there’s a big problem in the world today,” I explained.

“There is?” said Cherie. “I don’t think it ever changed.”

“They make lousy hamburgers up there, dear,” put in Cherie.

“I know that,” said Dini. “People get theirself in a rut and stay there.”

“He says that change is possible,” said Eddie. “But you have to do it yourself.”

“That’s what every preacher in the world tells you,” said Cherie “You got to figure it out for yourself. I got a sister who’s so religious that the kids go hungry. The bills aren’t paid, but they say, ‘God will take care of it.’ ”

“Son of a guns, they always make out,” she said.

“What I want to know is, why pay good money to hear something you already know?” asked Dini.

“Why do people go to the circus?” asked Eddie.

“To be entertained,” said Dini. “One guy came out and said, ‘The guy’s in there talking about love, but do you think the people are still gonna love each other when they get out?’ He said, ‘I come up to New York every two weeks, and I can tell you, they don’t love each other.’ He was one of the first ones out.”

“If you live in hope you will never die in despair,” said Cherie Korf. “That’s what I believe.”

Protesting A Parade That Never Happened

“They called off the inauguration. There’s no parade,” my mother told me Sunday night. She’d been watching TV.

“What about the protest?” I asked.

I called the All-Peoples Congress; there was a recording. “Come protest the inauguration of President Reagan,” said a voice with a Queens accent. “Call the officer for further details.” An ambiguous message.

I sat bolt upright at 4:30 a.m. Too bad. I was hoping to oversleep. I put on two pairs of long underwear, two pairs of socks and drank a cup of sage tea. The moment I stepped outside the tea froze to my moustache.

Dyckman Street looked like a press conference for Jane Wyman. One other tank-like man steered toward the subway.

The A came right away — and it was warm! Something wanted me at this inauguration.

Ahead of me, a woman tapped a cane down 21st Street. I recognized her from a Union Carbide demonstration.

“Do you need some help?”

“Sure,” she said. “Are we late? I didn’t want to take off my gloves to find out the time.”

“We’re just right. You can hear the buses, I guess.”

Inside the lobby of 19 West 21st Street, ten people shivered and conversed. A woman in a wheelchair greeted the blind woman gaily: “They cancelled the parade, so we’re going to march down Pennsylvania Avenue.”

We loaded onto the buses and drove through the City of Cold, a city without people, where the only light comes from boutique windows and “Walk” signs.

A man in a white sweater reclined in Tiffany’s restaurant on Sheridan Square and I wondered how his life had brought him there.

The remainder of the trip was woods and snow and sleep, until the bus stopped and some young women in the back started singing “Walking in a Winter Wonderland.” We’d reached our rest area.

Life in America is strange. You start out to protest the President and you end up in a silver bus with artificial wood panelling that stops at a fast food restaurant where machines try to sell you little plastic statues of dogs that smoke cigarettes. If only there was some way to protest that.

Then we drove off again to demonstrate against a parade that didn’t exist.

Still, I wish it didn’t remind me of 1984. I want to be rid of that year. I was so happy when it was over, and now the movie is out. With a dead man as the star.

I took out my paper and crayon and made my sign: “WHO FREEZES TO DEATH IN U.S.A.?”

The narrow brick buildings of Washington appeared in the window. Then the drugstores of downtown Washington. Then the empty reviewing stands of Pennsylvania Avenue. Then we were out there ourselves, in the two degrees.

“We’re here to greet the Chief,” a black woman smiled.

Seventy of us walked in a circle and shouted to no one: “Money for jobs, not for war. U.S. out of El Salvador!”

A row of police cars watched from across the street.

And the wheelchair woman’s laughing face, as she smoked a cigarette, filled my eyes with tears.

Then the rest of the demonstrators appeared down the Avenue, like the Cavalry, yellow flags streaming, chanting in a kind of African rhythm:

And we all chanted, and we filled the empty $1 million reviewing stands, 700 of us, stamping our feet and waving our flags and laughing at the cold.

“We’ve got to show more determination than they do. That’s why we’re here and they’re not!”

We applauded with our feet; the bleachers shook.

That night I watched the TV news. They showed the reviewing stands, empty. We had become unpersons at an undemonstration. We had been written out of history.

And two people had frozen to death in New York City. 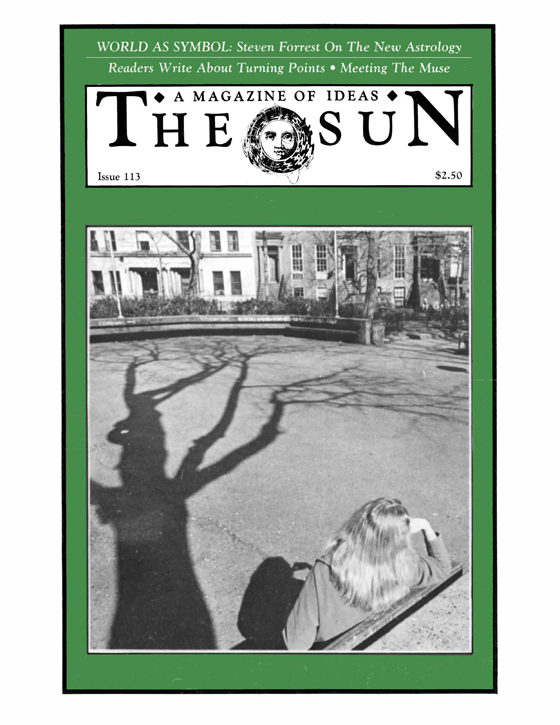 The World As Symbol

An Interview With Steven Forrest