A Matter Of Degree

As a writer, I’m not fond of limits on the press or media. In theory, then, total freedom of expression. For adults. In any relatively normal situation.

But this is an absolutely special situation in which we are living — rampant inflation and joblessness, insufficient care for the street’s nutcrackers, inflated pressure of world situation, and a lot of agitating media images. In this situation, there are just too many loose nuts and bolts who are too easily influenced by TV and movie violence, as well as by the cruelty and mindlessness of the hard-core pornography readily available today.

It’s not the mere existence of pornography that troubles me. We’ve always had it. It’s the amount of it that’s the problem. Never before, to my knowledge, has the world had so very much printed and cinematic pornography. It will not go away by itself, so it cannot be ignored.

Something — an extreme lack of moral/spiritual/political leadership, perhaps — is causing an ever more tense and extreme situation daily, and I’m afraid this makes many into rapists or killers who would just be mild nuts in other times. In these strangely tense surreal times, some controls on pornography do seem necessary. It’s a matter of degree. Extreme circumstances call for unusual stratagems, and certain controls are one of them. For some reason, many liberals and radicals are usually all or nothing on this point, advocating the total theoretical freedom of the press. They don’t admit that this is not working and that these controls might be handled in other ways, by restricting the sale of pornography at retail locations to adults, for instance.

In such an intriguing area of controversy as this, it seems that few if any hard and fast distinctions can be made. But at the same time I am well aware of the crucial problem here of defining pornography. Perhaps the Supreme Court’s classic definition as that which somehow has no “redeeming social value” is no better than most and may seem vague too at first. Yet it will suffice as a starter, a reasonable working definition until a better one comes along.

Ergo, controls on hard-core pornography seem as good a possibility as any to try. A few years back, Margo St. James reported in the Berkeley Barb on the possible connection between the “total” freedom of expression in Denmark and the rising rape rates there.

While I consider the other women writers in the same issue of the Barb a little extreme on the precise point of album covers displaying partial female exposure, I must agree with the general thrust of their argument: sales enticements via partial female nudity are exploitative and unhealthy, especially where an S & M tone conveys violence to women.

Other points don’t seem so irrefutable. Attempting to distinguish between erotica and pornography, one writer made the vague assertion that pornography alone is “voyeuristic” and a thing you can only “buy and sell.” Goodness! However alluring or even joyful, erotica, too, can be bought and sold, and it is somewhat voyeuristic as well. This writer got in over her head, it appears.

In a sense, everything is a matter of degree. In retrospect, the number of times variations of the word “fuck” are used in D.H. Lawrence’s now celebrated Lady Chatterly’s Lover seems rather excessive. One can still say the book was very much needed at its precise point in time, and may still provide readers with some pleasure and have “redeeming social value” as well. Likewise most of Lawrence’s other books and those of Anaïs Nin, Henry Miller, Allen Ginsberg, Lenore Kandel (The Love Book) and many others. There are other things of interest in these books: story, characterization, superior use of language, and so on. We could almost say that erotica is a form of literature, in that the reader may be excited by the style and characterizations and other matters as well as the purely erotic portions of the book. Although the Supreme Court failed to make such a subtle distinction (that some erotica may be literature), there’s still a kernel of truth in the Court’s attempt to set apart a book of pornography from an erotic, more joyful, uplifting one. And likewise the Barb and other feminist writers, in trafficking in these distinctions and making liberal use of such terms or traits as joyful, magical, uplifting, healthy, applied to erotica, are probably doing us solid service as well.

Buddhist writers, thinkers, and painters, and others such as Carl Jung, Alan Watts, Erich Fromm, and Rollo May, teach that one may develop one’s fully-rounded true or higher self, or fall willy-nilly into one’s bargain basement or lustful self. Sometimes the line that divides the one from the other can be ever so thin and difficult to recognize, unless one is extremely skilled in self-knowledge, which from the looks of things many people are obviously not. Moser teaches that if a special love relation is nowhere at hand, a little lust is okay occasionally, provided you don’t confuse it in yourself for the other, higher thing.

Love is the point. Hopefully one wants to create and encourage mystery and relation with others and with nature, art, etc., especially since the universe at its healthiest is so full of relationships and so full of mystery! Which partly explains our happy response to a lot of erotica. Pornography in no way adds to this magic way of health and joy and laughter. It is definitely exploitative, mostly of women. But it exploits men, too, those not ready for mystery, magic, and relation. Too many pornographic films exhibit total lack of humor, fun, and adventure, not to mention dumb and distinctly uninteresting stories and people. But again, it’s the amount and extremity and brutality of current pornography, not its mere existence, that is the issue. Can we allow this dumb, deadening proliferation to just continue without controls and sanctions of some kind? Hardly.

One final question. Are most children or even teens ready for the kind of beastly sado-masochism shown everywhere today? I really doubt it. And the stuff is so readily available, too, often at the corner drugstore, even for little ones under ten. There’s a move on in supposedly revolutionary/radical Berkeley to put limits on those who may buy or peruse these magazines and books; this trend is going on elsewhere, too, I believe, probably more strongly. This is, finally, very much to the point, if a bit belated. What adults do on this matter and what we’ll permit kids to do are not, or should not be, the same thing. Freedom of the press is one thing; one has to wonder if pornography isn’t some other thing. And if the distinctions trafficked with throughout this article are, indeed, true as they seem, pornography is not something we want available to kids. Show them the worst side of sex first? What kind of sense does that make? 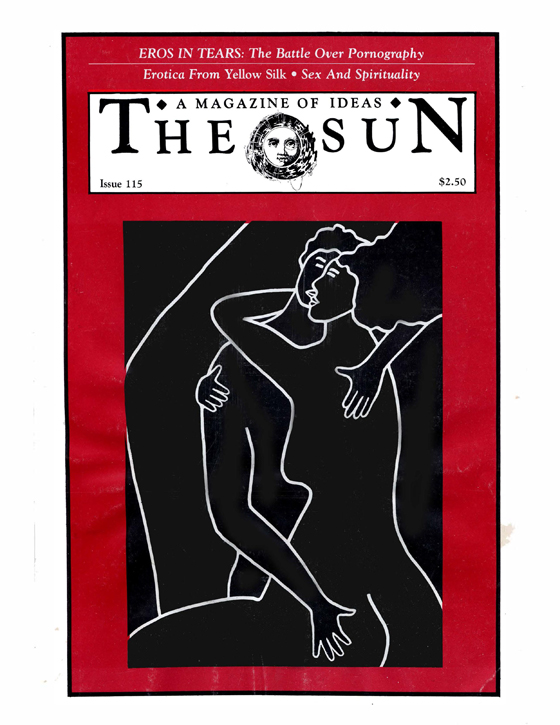 The Gift Of Sexual Energy

Notes Toward A Theory Of Pornography

More Than A Rumor