It’s been quiet here tonight. Earlier, it rained a little, which always sounds reassuring on THE SUN’s tin roof. Occasionally, a car passes, or a drunk, on his way home from one of the nearby bars, walks by the office, talking to himself. I pour another cup of coffee. I talk to myself, too, wanting to hear how these sentences sound after I type them — as oblivious as that drunk to whether anyone is listening.

By the standards of the world outside my window, hardly anyone is listening. THE SUN is a tiny boat on the high seas of publishing; the big waves are made by other magazines, luxury liners with twinkling lights, sure of their destination, promising one thing or another. I don’t like to make promises, except that THE SUN will be true to itself. I chart a course by the constellations of meaning that light up our inner sky. What THE SUN is about, after all, is the storm-tossed journey we all must make, beyond safe harbors and twinkling lights, to the far reaches of ourselves. The destination is always wordless, though words, the right words, may illumine the way.

My words, and those of the other writers in THE SUN, clearly aren’t for everyone. Although we’re not trying to appeal to an elite, it’s nonetheless true that THE SUN demands a lot from its readers — self-honesty, thoughtfulness, the willingness to live with questions instead of answers. It turns out there’s not a vast audience for this. Our attempts to find more subscribers are never as successful as we hope they’ll be — which, I’m coming to understand, doesn’t mean there’s anything wrong with THE SUN or with the people who don’t read it. What draws people to the magazine is, finally, a mystery — some unpredictable conjunction of temperament and circumstance, marrying us for a moment, joining us in a telepathic surge disguised as words.

That there aren’t more readers, however, poses a problem, for financially we depend on readers. Thus, along with the day-to-day challenges of publishing a magazine — selecting the right material, meeting deadlines, working with each other in a way that embodies THE SUN’s ideals — there are chronic worries about paying the bills.

In a way, I’ve grown used to this. I’ve become proficient at cutting corners and highly imaginative at putting off creditors — while continuing to question my own prejudices about success, wondering whether I’m sabotaging THE SUN because I really want to be poor. There used to be some truth in that: I imagined, naively, that being poor conferred a kind of grace unavailable to the rich. But I no longer believe that money, or the lack of it, gets us in or keeps us out of Heaven. Being grateful for what we have, and nurturing within ourselves some true generosity of spirit, is what counts; this is the real wealth, available to rich and poor alike. To the extent THE SUN has reflected this attitude, it has also been sustained by it. The generosity of our readers always makes the difference; how often an unexpected donation arrives the same day a bill has to be paid. I’ve gotten used to this, too, without taking it for granted.

But I’d like to diminish the drama around sheer survival, so there might be more creative energy for improving the magazine. I think THE SUN keeps getting better and I know it can be better still. I’m asking you to help accomplish that by becoming A FRIEND OF THE SUN and pledging your ongoing financial support of the magazine.

Such support, in the form of a monthly or quarterly tax-deductible donation, would provide a more reliable income for THE SUN. Instead of fretting about how to pay the bills, I could count on your help to make up the difference between the magazine’s regular income and its expenses.

As A FRIEND OF THE SUN you would, in a deeper sense, be supporting the very idea of a magazine like THE SUN. How improbable THE SUN is, after all, in a society given over to profit rather than possibility, to the bottom rather than the top line. To orient THE SUN solely toward profit would be a loss: publishing strictly what will sell; cozying up to businesses that promise full-page ads if you write something “positive” about their product; sacrificing integrity day by day, in small ways. I’m a practical man — otherwise I couldn’t put out THE SUN on a budget of less than $50,000 a year for salaries, printing, rent, postage, office expenses, everything. But is it practical to sacrifice oneself, or one’s ideals, on the altar of compromise? Is it practical to turn THE SUN into something it isn’t just so I can afford to keep publishing it? Why bother handing you a cracked mirror?

Yet without mass circulation or lucrative advertising, THE SUN shares the dilemma of every other small press or dance company or solitary artist trying to bring into the world something new and of value yet subject, like everyone else, to the world’s time-honored values, which require paying the bills, balancing the budget. What do you say to people like this? Do you wish them well? Do you advise them to give up the impossible? Do you recognize that in a society such as ours, it’s up to each of us to nourish what is best in all of us, in whatever way we can?

Finally, how do you decide whom to help, and how? Any answer I have for that would probably be glib and self-serving, as I love THE SUN and would do anything in my power to keep it alive. Clearly, the only answer to that question is the one that makes sense to you. I ask you to consider how much sense THE SUN makes, how much sense there is in keeping it alive. 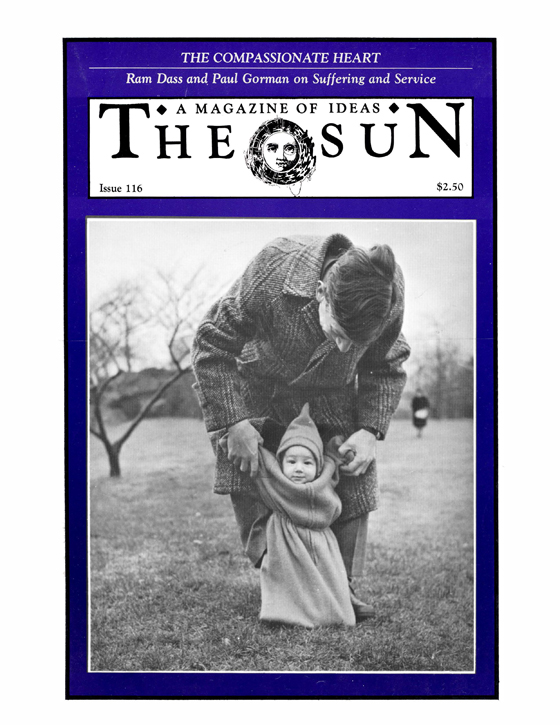 Lord Of The Wind