In our scriptures, it is said that there are four kinds of horses: excellent ones, good ones, poor ones, and bad ones. The best horse will run slow and fast, right and left, at the driver’s will, before it sees the shadow of the whip; the second best will run as well as the first one does, just before the whip reaches its skin; the third one will run when it feels pain on its body; the fourth will run after the pain penetrates to the marrow of its bones. You can imagine how difficult it is for the fourth one to learn how to run!

When you are determined to practice zazen with the great mind of Buddha, you will find the worst horse is the most valuable one. In your very imperfections you will find the basis for your firm, way-seeking mind. Those who can sit perfectly physically usually take more time to obtain the true way of Zen, the actual feeling of Zen, the marrow of Zen. But those who find great difficulties in practicing Zen will find more meaning in it. So I think that sometimes the best horse may be the worst horse, and the worst horse can be the best one.

Generally gentlemen who have been overly involved in worldly affairs for a long time have long been stuck like glue in the afflictions of the senses. When unexpectedly it happens that someone instructs them to do some meditation in a quiet place, and they temporarily get a feeling of unconcern, they immediately take this as the ultimate in peace and happiness. They are far from realizing that [quiescent unconcern] is like a rock pressing down on the grass. Though for a time they become aware that the scene is cut off, nevertheless the root and branches are still there; when will they experience quiescent extinction to the full? If you want to have real quiescent extinction appear before you, you must make a sudden leap within the fires of birth and death, and leap out without moving a hairsbreadth. Then you’ll turn the rivers into pure glee and the earth into gold; faced with situations, you’ll be free to release or capture, to kill or bring life; no device to benefit others or benefit yourself will be impossible.

My whole life I’ve had a great vow that I’d rather suffer the pains of hell with this body on behalf of all sentient beings, than portray the Buddha Dharma [Truth] with this mouth as a human sentiment, and blind people’s eyes.

You should know that setting forth the principle of deliverance in its entirety amounts only to this — when things happen, make no response; keep your minds from dwelling on anything whatsoever; keep them forever still as the void and utterly pure (without stain); and thus spontaneously attain deliverance.

Discuss it as you may, how can you even hope to approach the truth through words? Nor can it be perceived either subjectively or objectively. So full understanding can come to you only through an inexpressible mystery. The approach to it is called the Gateway of the Stillness beyond all Activity. If you wish to understand, know that a sudden comprehension comes when the mind has been purged of all the clutter of conceptual and discriminatory thought-activity. Those who seek the truth by means of the intellect and learning only get further and further away from it. Not till your thoughts cease all their branching here and there, not till you abandon all thoughts of seeking for something, not till your mind is motionless as wood or stone, will you be on the right road to the Gate.

The Zen Teaching of Huang Po on the Transmission of Mind
Translated by John Blofeld
(Grove Press, 1958)

If you want to freely live or die, go or stay, to take off or put on (your clothes), then right now recognize the man who is listening to my discourse. He is without form, without characteristics, without root, without source, and without any dwelling place, yet is brisk and lively. As for all his manifold responsive activities, the place where they are carried on is, in fact, no-place. Therefore, when you look for him, he retreats farther and farther; when you seek him, he turns more and more the other way: this is called the “Mystery.”

The Record of Lin-Chi
Translated by Ruth F. Sasaki
(The Institute for Zen Studies, Kyoto, Japan, 1975)

You people now should be likewise. Do not demean yourselves, saying that you are stupid and dull. If you do not arouse your minds in this life, when will you ever practice the Way? If you now practice insistently, you should not fail to attain the Way.

Dogen
Record of Things Heard: From the Treasury of the Eye of the True Teaching
Translated by Thomas Cleary
(Prajna Press, 1980)

Attributed to The Buddha in
The Dhammapada
Translated from the Pali by P. Lal
(Farrar, Straus, & Girous, 1970) 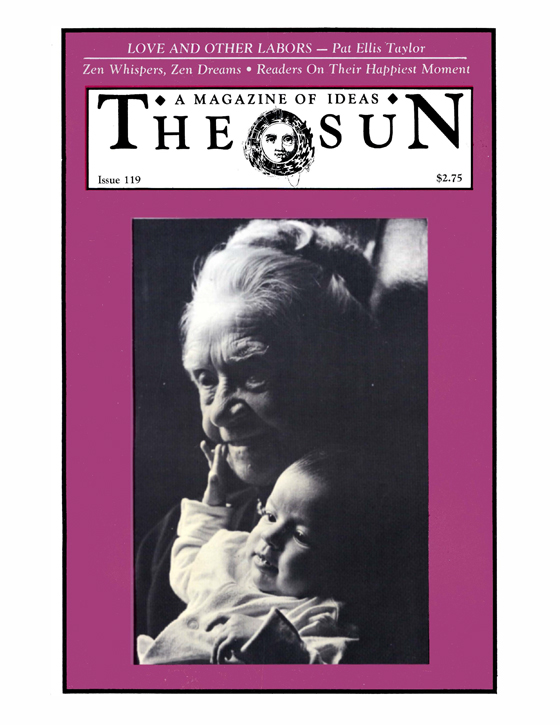 By Alan Brilliant
The Sun Interview