His small, sinuous hand moves, graceful as water over a rock.

“Like this,” he says, and smiles as he hands back the brush.

I cannot make the character look like what he has indicated. Impossible. Time after time, attempt after attempt, sheet of wasted paper after sheet of wasted paper, I try to find in myself that combination of conviction, intention, balance, energy, attention, whole-heartedness and ease that seem to invest both his movements and the calligraphic results. At the moment, I want those qualities; I want to make them mine. “Mine,” now there’s a problem.

Across the room, a white-haired woman asks him, the instructor, the thumb-sized Reverend Jomyo Tanaka, “What does this one mean?”

What’s she talking about? Looking across the expanse of table between us, I can see the Japanese character she is referring to. To my eye the figure could as easily mean “Chinese take-out noodles” as “child.” Is she bullshitting in the way of all uncertain novices, trying to find deep meaning where there is only doubt? Or is she telling some truth and having some vision that escapes my untutored spirit? I don’t know and don’t want to waste time finding out. I am too busy with my own failures, which, in general, I find very enjoyable.

I wet the brush in the shallow stone trough that holds the inky ink. The liquid is so black and the paper so white that each stroke takes on a kind of magnified significance: when the bristles hit the paper it’s Black and White, seems Right or Wrong with a vengeance. In oriental calligraphy, as in life, there’s no going back. What’s done is done. DONE.

For tonight’s two hours there will be a series of characters, but at the moment I am trying to penetrate and emulate the character “Ho,” which means Dharma or dharma — Truth or phenomenon. Following the sample that Jomyo has made for me, I stroke the strokes onto my own paper, following the order he has dictated by little arrows with numbers. While in the midst, I have no idea what it all means any more than a tennis player who is playing worries that this action might be called “tennis” by others. Just hit the damned ball, banana face! I swing. Another flop: the character is not balanced on the sheet; space-empty and space-filled are out of whack and the strokes are of differing widths and intensities.

“You’ll be OK if you just practice for two or three years,” Jomyo encourages.

A response barges into my mind uninvited: “I never want to be good at this. It’s too beautiful to be ‘good’ at!”

Which, of course, isn’t exactly the truth in one sense. From the outsider’s point of view, to practice is to become proficient, to become good at, to become expert. Without practice, there is no understanding. So, if you practice, you get “good” at it. That’s the way what’s called calligraphy in the west looks to me. It looks “good.” Very neat. And somehow studied, like an artistically designed typeface on a printing press. Very nice. In oriental calligraphy, to the extent that there is an object at all, the object is to be original. Like a child: the child begins with emulation and becomes a responsible individual, wholly capable of doing something that may look imitative but is in fact entirely personal, creative, spontaneous, and original. Like a lot of other “artists” these days, I would love to skip over the imitation part and “express myself” or “be original.” I come up with the same dismal results they have: skipping emulation in hopes of reaching originality sooner only creates chaos, foolishness, pain, and endless imitation.

At the moment, my imitations are pretty foolish. After eight or ten classes copying the characters of the “Heart Sutra,” one of the central texts of Zen and other forms of Buddhism, I feel as if I’ve only begun to plumb my inabilities. In tonight’s first hour, using more than fifty sheets of paper, I’ve found one stroke that feels/looks good. It is part of a character that otherwise looks/feels like shit.

Down the way at my table, the acupuncturist with granny glasses and a gentle disposition asks, “Will the Reverend show this?”

Again I am pulled away. I get irritated with people whose humility expresses itself by talking pidgin English to foreigners as if those foreigners might somehow be mollified and descend from imagined heights to impart their great understanding. I am the more irritated in this particular instance because I have known the Reverend Jomyo Tanaka for seven or eight years. His esoteric Shingon Buddhist practices are not the same as Zen practice, which I follow, but our paths have crossed from time to time. Not once have I seen him miss a beat in understanding English. Neither have I seen him pull holy rank on anyone. He isn’t that sort of monk. Very straight and friendly. I realize that I am irritated with the acupuncturist for exactly the kind of behavior I have first-hand experience with. I, too, have engaged (and might yet again) in the kind of verbal kowtowing that raises the “savior” higher by reducing the self.

Jomyo makes no comment. He borrows the acupuncturist’s brush and flows through a character. I go back to “Ho” and try to flow. Creating in the process another one for the wastebasket. Another beautiful failure. Sometimes the beauty of it all just gets to me. Suddenly, on a page where there is nothing, something appears, etched in incomparable clarity — WHAM! — and then it’s gone, done, over, past. From the scant number of people in the class — five or six — I know that there are not many who are magnetized as I am. But I am. I am a sucker for what I find beautiful. “Rightness” cannot hold a candle to beauty in my book, and when the brush touches the sheet, that, for me, is somehow beautiful. Over and over again I get it wrong. Beautiful.

Jomyo makes no mention in his classes of originality or beauty or the “life practice” that some consider oriental calligraphy to be. He just shows and lets us find out for ourselves. He is very kind.

After circling the room to look at each student’s progress and perhaps offer a hint or two, Jomyo is back with the acupuncturist.

“What does this mean?” the acupuncurist asks, forsaking pidgin for the moment.

The acupuncturist takes up the brush and makes his move. My eyes follow. Before he has finished the stroke, the word is out of my mouth unbidden:

It just pops out. We are all so careful not to say anything negative about each other’s work that my outburst catches me and everyone else off guard.

And without a second thought, I pick up the brush in front of me, dip it in the ink, and draw it across the page. One simple line.

And it’s OK. I look at it and know it. But my audacity clings to my mind like B.O. To presume to comment. A beginner like me. I shock myself. But more shocking still is the realization that both the comment and the example are on target. Jesus! I feel as if I have laid claim to a force I had previously acknowledged only with homage. It’s as if I’d said to the force, “You’re mine!” and the force replied, “You betcha!”

Jomyo comes around the table to my place.

“Good,” he says briefly, then removes my example to his own seat where he proceeds to write on it in his orange ink.

I feel a little silly. A single line across a page and I get approbation not only from someone who knows “better” but also, and more certainly, from myself. For a line?! Yup. One second. One line. That’s all.

Like all bright openings, all perfections, this one recedes quickly. In no time I am back to the same old mistakes. “I” am back in the saddle, getting in my way, wanting to get it all “right.”

But like all perfections remembered, this one stands, clear and undeniable for me, an advertisement for the future. I long to recreate that past perfection in some new way and yet know simultaneously that that longing will have me tripping over my feet for a thousand or a thousand thousand sheets to come. The central characteristic, perhaps the only characteristic, of perfection is non-attachment. The artist speaks of the “muse” and the musician says “I was hot,” but in their hearts there is only mysterious joy: I was present at a beautiful event and yet it was not “I.” One flashing moment of I-not-I and then it’s back to the wastebasket and the getting-it-right and trying. In Zen there is a saying: “Easy to enter Nirvana, difficult to enter difference.”

But difference is what I’m now faced with. Working on “Sho,” birth, now. Page after page of birth. How is it possible to fail at birth? Fail at Nirvana? Fail at difference? At birth “I” failed or was missing. Right now how could it be any different? How could it be the same? You figure it: inky ink, white white page, moment after moment, flop after flop and yet, quite entirely, 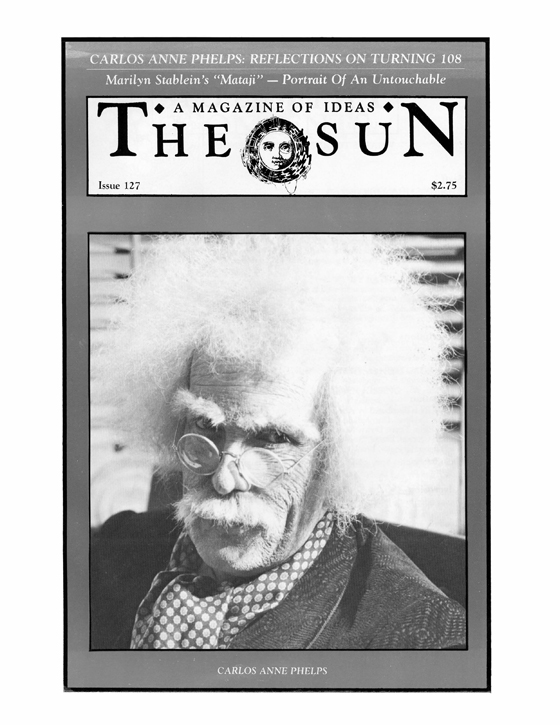 Sonnet For Contemplating A Woman