I’ve been passing pennies on the sidewalk. There seem to be a lot, as if I’m not the only one who doesn’t bother anymore to lean down and pick them up. After all, what good’s a penny anymore? It’s enough to buy a memory. Every time I see one I think of my Grandma Bralley. I see the two of us in 1954. She has me by the hand, for I am only four, and we are walking down the street in Bristol, a town all brick and iron-stained industrial cement.

We were on our way to stare into the Delaware, to watch that oily river flow by, when Grandma saw the penny. It seemed to take her forever, and I held my breath, as she leaned over all arthritic to retrieve that penny off the street. When she finally had it, she held it out proudly for me to see, “Now that’s a lucky penny!” The idea truly impressed me.

It’s a young girl’s first memory, these visits to Grandma’s. I think she liked me then. It was later that I grew too loud and impulsive, so that when I entered a room Grandma would jump and snap at me, “Be still.” I made her nervous. I don’t recall ever doing much of anything right for her except one time when I was about ten. Realizing she was very old, I spent the afternoon sitting on the sofa with her, holding her hand in mine, pushing her thick blue veins back and forth under her skin like spaghetti on a plate. I wanted her to tell me all about what it had been like when she was a girl. I looked into her eyes and saw they were so blue. I told her they were beautiful and suddenly, eighty-three years old, she sat up like a ramrod and burst into a smile. “The boys all used to tell me that.” I’d never thought of Grandma and boys. I had never seen, nor would I ever see again, such a spark in her.

Later, that night, my father came to my room. Grandma had told him I had been nice. I was about to say how happy I was. Grandma’s stories had been wonderful. She’d told me things no one else knew. But Pop saw something else. “Here, you earned this dollar.” I liked the money, but it made me feel strange, being paid like that. Everything, like love, got turned askew.

It’s a young girl’s first memory. With the exception of kneeling with my mother in the cold light of what must have been a March day, tending to the daffodils blowing in the wind. But the image has no story, almost like a prayer, kneeling, mother’s hands, and tending to the plants. The wind blows away the words; the sun so bright, the daffodils so yellow, and still the scene is frozen.

The first activity is in Grandma’s apartment. Delivered by a mother’s hand that trails off high above. I am to stand there for a fitting of the sky-blue sweater Grandma is knitting for me. It’s not the first time. We come regularly for this, and I love the routine. Standing with my arms spread out, the sweater held against my back, the arms smoothed out along my own. Her touch made me tingle and I hoped that if I stood very still the ceremony would last longer.

But perhaps the best part of the visit was the “secret garden.” It was the best part of our walks. There was a gap in the row houses with a wrought iron gate we’d swing open, and enter into another world filled with flowers, profuse growth, and grasshoppers. Best of all were the birds. They seemed to be everywhere, jumping branch to branch and hovering above the flowers. Their colors were so bright, I thought they were wild parakeets. How they came to be there, I do not know. How there could have been so many, how there could have been such color in the midst of Bristol, I do not know — or even what part of the image after more than thirty years is factual. Memory becomes reality, and it is magic to me.

After our walk we took a nap. This was the bizarre part. I don’t remember ever sleeping. We’d lie down in twin beds facing one another. Grandma would order, “Go to sleep,” and we’d close our eyes. Then I’d open mine and wait. I knew what was coming, a truly remarkable phenomenon. In a minute or two Grandma’s eyes would pop stark raving open. And she would glare at me as if to say, “What are you doing?” I wouldn’t smile, or move, or anything. I’d just stare back fascinated by her tension. She’d look at me, then close her eyes. I’d wait on silently, totally amazed that anyone would try to go to sleep in such a contradictory manner. I found that very interesting, and vaguely the idea came that she didn’t like me.

Grandma died when I was thirteen. She was the first person in whom I watched a mind go. Near the end I was taken every few days for a visit, and I would listen embarrassed by her conversation. They told me that her blood was too thick for her heart to pump, and I wondered how it was that someone stayed alive so long after nothing’s left. I had seen bugs crushed and gone so quickly. I couldn’t decide if life was fragile or tenacious beyond belief.

My mother sat by her side each day as she slipped away. Grandma didn’t like her either. Everyone acknowledged that. I remember my confusion the day we pulled up to Grandma’s apartment. Mom said, “I’ll slow down to fifty and you jump out.” I had no concept of what fifty meant. But I saw Grandma’s glare and Mom’s giggle, and wondered what the problem was. After all, Mom said she was slowing down. Why couldn’t Grandma just get out? But in the end, Mom was there for her, most of the time alone. And after it was over Mom stopped smoking cigarettes. She said she never wanted her children to have to sit through what she had with Grandma.

I could hardly wait to tell my sister that Grandma had died. It seemed like such a news flash. She replied with a big grin, “She did?” and at the funeral we started laughing. It was terrible — my father next to me, head bowed, his hands trembling. And I was laughing out of control. I just about burst with trying not to, but every time I got myself quieted I’d feel the pew shake, and knew my sister was down the line doing the same thing. I’d start laughing all over again. I remember Grandma’s funeral as the torture of this laughter, and the curious inability to comprehend that she was really up there in that coffin.

That was one strange concept. She’d told me that she didn’t want to be cremated, because Jesus had been buried. She wanted to be put into the ground, like him. Except, I knew they had put him in a cave, more like on a bier with linen sheets and white-washed walls. I thought of Grandma in the ground, and that song we sang, “The worms crawl in. . . .”

Soon the dreams started. I saw Grandma old and we both cried. But in a while she was happier and we talked. After a few months I didn’t really consider them dreams anymore. They were more like visits while I was asleep. She was getting younger, strong and happy. We enjoyed each other and I’d wake up feeling good. Then the dreams stopped. I figured she had gone off on her own. Probably, she had a lot of things to do.

My other grandma died six months ago.

She held on to life with the same ferocity that a quarter of a century before had taught a young grandchild the phrase, with gesticulations, “You goddamn son of a bitch, kiss my ass.” I could understand her anger and vehemence, but calling someone a puppy as an insult was more problematic.

Now that same spirit kept her in a body decaying back to earth, with a brain that could no longer make the necessary connections. Above the bed the I.V. dripped clear fluid into her, while at the end of her catheter the bag remained ominously empty. Her kidneys had shut down and Grandma retained everything, except the rectal exudate as tissues rotted inside and herpetic lesions oozed. We spoke to her through masks, stroked her head through rubber gloves, and felt her body grow cold, while in her eyes from time to time we could see she recognized. She breathed on through the night, one breath at a time. There seemed no hurry, just a deliberate concentration to take one step at a time.

From across the hall, a television advertisement sang, “We’re off to see the Wizard, the wonderful Wizard of Oz.” I saw Grandma leading us as children, dancing round her living room. She would sing the song. It was her song, and in my Grandma’s city, all roads led to Kennywood.

Kennywood Park, where at summer’s end the Westinghouse employees held their family picnic. My grandparents always took us and it marked the finale of our summer with them. It was the best of all the summer. Grandfather took me on the Jack Rabbit, the biggest roller coaster ever, so called because it actually jumped the track. He and I were the only ones brave enough to ride it, and I was filled with bragging pride at how tough I was. There were pony rides, and boats through tunnels, and Noah’s Ark, a “fun house,” which I hated because it scared me so.

I didn’t much care to drink the buttermilk either, but I loved the truck it came in, a huge, shining, stainless steel tanker, which amazed me to think of as all filled with milk and yellow butterflakes. I liked to sit under the ferny locust trees amidst the rows of bright green benches, as my sister and Grandma drank their ice-cold milk. Sandy swore it was the best buttermilk in the whole world, and we could only get it at Kennywood, just this one time every year. I knew she told the truth, and I liked to sit there and watch her drink. I never took a sip, but I loved the fact that that milk existed. It set my entire world in order.

Now, it was late, and I had to go home. I didn’t think Grandma would make it through the night, but she had fooled us so many times in the past year, and I had “obligations” to meet in the morning. I placed my hand upon her head, leaned down to her ear, removed my mask and whispered, “Grandma, I have to go. You have sweet dreams. Sweet dreams, Grandma. I love you.”

I had never before encouraged someone to die. And in the morning when the phone rang, I knew before I answered. And like twenty some years before, all I could think of was to tell my sister. 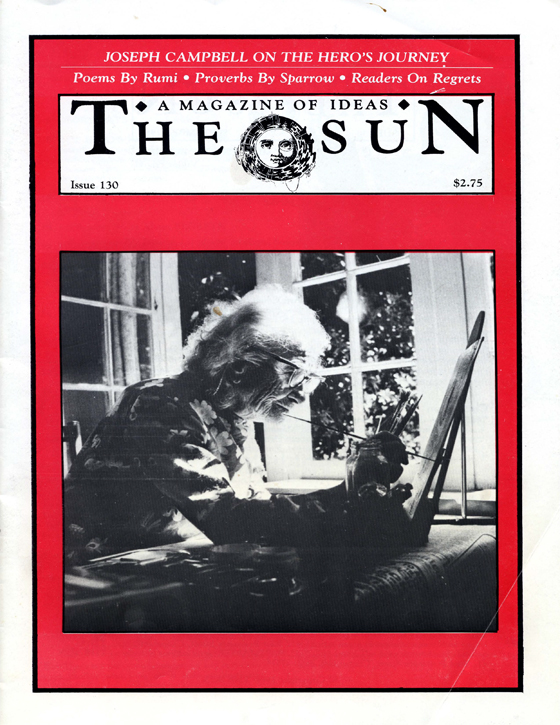