The Dance | By Kim Addonizio | Issue 144 | The Sun Magazine
close

During this holiday season, Sharon has gotten into the habit of counting how many of her ex-lovers show up at any given party. Tonight, as soon as she walks into Ruth’s house, she spots three: Jonathan, the affair that caused her divorce; Jerry, with whom she’d gotten involved right afterward; and Michael, the roommate and best friend of her ex-husband, Raffi. Michael had refused to sleep with Sharon until Raffi accused him of doing it anyway and then went away for the weekend with Nancy, one of Michael’s ex-lovers. True, Michael had never been all that attached to Nancy, but when Sharon showed up that Saturday evening with Dom Perignon, he must have felt justified in letting himself be seduced. They spent one fantastic night together, and then some sense of loyalty or cowardice reasserted itself and Michael refused to see her. At Ruth’s party, Michael greets Sharon as though they had never lain side by side on his waterbed, exhausted by orgasm, their toes touching. He spends the entire party blowing up balloons. Sharon, feeling hurt and rejected, drinks too much and passes out in the dining room under a table loaded with potato pancakes, sour cream, and applesauce.

Sharon’s sister, Myra, throws a surprise party for Sharon’s thirty-fifth birthday. Sharon walks into Myra’s darkened living room and the lights flash on. Two ex-lovers emerge from behind the sofa, another is standing beside the aquarium, and a fourth is pouring champagne in the kitchen. Later in the evening, five more men she has slept with arrive. It is an unusually high count, but then Myra has invited people they’ve known since high school. Michael is not there. Sharon sits on a Naugahyde lounge, eating cake from a paper plate, remembering what each lover was like. The first and last time with Kevin, he assumed some kind of Kama Sutra position, turning around on top of her so that his head was at her feet and all she could see was his ass rising and falling. George used to give her hickeys; she’d spent half her senior year in turtlenecks. Murray always got drunk first and was usually impotent. Mitchell finally told her he was gay; he is here tonight with a male lover. Jordan had been in love with Sharon, but she had fallen in love with Greg, who tied her up once with an extension cord. Sharon watches Jordan and Greg arm-wrestling at the kitchen table while Greg’s wife, that pregnant cow, refills their drinks. Jordan wins three times in a row, looks over at Sharon, and grins.

At 2 a.m. Sharon drunkenly rifles through Myra’s refrigerator, looking for something to eat. She opens a plastic container and sees a mess of skinny brown worms clumped together at the bottom. “Ugh!” she screams, dropping the container on the floor. Myra’s husband, Morris, comes in and begins scooping worms back in with his hand. “For the frogs,” Morris says. “Want to watch?” Sharon runs to the bathroom and throws up chocolate cake, Swiss Almond Vanilla ice cream, champagne, and tequila. Jordan knocks on the door. “Are you OK, Sharon?” he says. They go back to her apartment and make love, and Sharon thinks Michael, Michael, Michael the entire time.

The man Sharon is seeing now is named Sam. Sam is a good lover, but Sharon doesn’t have that sense of nervous excitement she always feels around Michael. Sam is an artist, a painter, but in spite of that Sharon likes him. She usually stays away from artists of any kind because they are so egotistical and self-involved. Sam, though, is relatively normal. He doesn’t talk about himself all the time, and he listens to Sharon’s problems without judging her. She finally tells him about her passion for Michael, partially to jeopardize their relationship, partially because she is drunk and needs someone to talk to. Sam doesn’t reject Sharon, as she fears and hopes he will. He cooks her spaghetti carbonara and later holds her on his lap, rocking her back and forth and singing the words to “Lush Life.” Sharon has always loved the music — she has a recording of John Coltrane playing it — but she never knew there were words to it.

Ambivalence is a tradition in Sharon’s family. Her mother was Jewish and her father is Roman Catholic. Now that her mother is dead, Sharon and her father celebrate Christmas; before, they would alternate years, decorating a tree one season and lighting a menorah the next. Sharon always liked Christmas better anyway, but Myra married a Jew and now celebrates only Hanukkah. Sharon married a Jew, Raffi, but he wasn’t very observant. Sharon will always say she is Jewish, even while she is dragging home a fir tree to put up at Christmas, because deep down she feels that way.

Sharon has long arguments with Myra’s husband about Jesus and Christmas. Every year during Hanukkah Sharon and Morris get into an argument, and every year, because he doesn’t know how to fight clean, Morris finally makes a nasty crack about the rapid turnover of Sharon’s sexual partners. For two Hanukkahs in a row Sharon was married to Raffi, so Morris had to confine himself to past history, which he knew all about from Myra. Sharon and her sister are very close. Sharon tells Myra that Michael was the best lay of her life. Myra asks, “Is that everything?” Sharon looks around the living room, at the House and Gardens on the coffee table, the fuzzy photographs of Myra and Morris and their two boys, the wall that is papered to look like a wheatfield with a fence in front of it. In the aquarium the worms are floating down through the water and the fish are converging on them, beating out the frogs, their lipless mouths working. “Yes,” Sharon answers, sighing.

Ever since her mother’s death, Sharon has been drinking too much. After she got over the worst of that, she blamed her drinking on Raffi. He had slept with only one woman before Sharon, and he had married her, too. Sharon was afraid to tell Raffi about the number of her ex-lovers, but he found them out, one by one. “You’re not the girl I thought I married,” he used to tell her. Sharon winced whenever he said “girl.” Raffi finally called her a tramp, a word he got from his mother. Raffi’s brother called her liberated and tried to stick his tongue in her mouth when he caught her under the mistletoe at her father’s house one Christmas. Now everyone calls Sharon a potential alcoholic and tells her to go to AA to get help. She can’t go into a bar anywhere without running into someone she knows who tells her not to drink too much, so she stays home and gets sloshed watching “Dynasty” and “Miami Vice,” and demolishes packages of Chips Ahoy and Oreos. She always takes the Oreos apart and eats the icing first.

When she was in the fifth grade, Sharon had to draw a picture of herself. She drew a pretty girl, with curly blonde hair and large breasts, standing next to a boy with an erect penis. The boy bore a striking resemblance to Lenny Deutsch, whose desk was next to hers. Sharon had to stay after school. The next morning Lenny and three of his friends jumped her near the basketball court and held her down and pulled down her jeans. Then they ran away, leaving her crying. An hour later Sharon walked into the classroom and sat down next to Lenny, and at recess she and five of her friends got Lenny in the woods behind the tennis courts and took his pants off, poured gas on them, and torched them with kitchen matches.

Lenny turns up at a party Sharon gives at her apartment. He is dating Nancy, who was first Michael’s and then Raffi’s ex-lover. Lenny gives Sharon a present, a little flipbook called “The Dance.” As Sharon flips the pages, the man and woman in the series of photographs go through several intricate steps, faster or slower depending on Sharon’s thumb. It is only later, when she is alone with the last of the gin, that she looks closely at the two figures and sees that they are not the same people all the way through the book; a different couple, wearing the same clothes, has taken their place.

At a party at Sam’s house, Sharon stands in front of the fireplace, holding Sam’s cat in her arms. One of her ex-lovers walks up to her. “Sharon!” he says. “What are you doing here? I didn’t know you and Sam knew each other.” “It’s a small town,” Sharon says, letting the cat go. He is the only ex-lover at the party so far. His name is Lee; when Sharon knew him his name was Bliss and he was into Tantric sex. Sharon walks away from Lee and goes over to Sam, who puts his arm around her. Michael walks in with a woman Sharon knows slightly, a dancer who used to live with Jordan. When Michael sees Sharon, he stops and says something to the woman. They talk for a minute and then walk over to a table Sam has covered with Brie and homemade bread and apples. Sharon pulls away from Sam and goes for more mulled wine, already so drunk she knocks over the plastic cup trying to pour some. Sam follows her and takes the bottle out of her hands, then leads her to his bedroom and closes the door behind them. Sharon collapses, crying, onto the tangle of coats on the bed. Sam sits down next to her and strokes her hair. “Everywhere I go,” she sobs. “I hate this town.” Sam rubs her shoulders. “Let me take you away from all this,” he says in a joking voice, though Sharon knows he isn’t joking. She waits for him to tell her he loves her, but he doesn’t say anything else. Sharon stops crying. “Where would we go?” she says. “Wherever you want,” Sam answers, unbuttoning her blouse. “Someplace far away,” Sharon says, “where no one knows who we are.” “Not even us,” Sam agrees, and pulls her face to his, and kisses her. 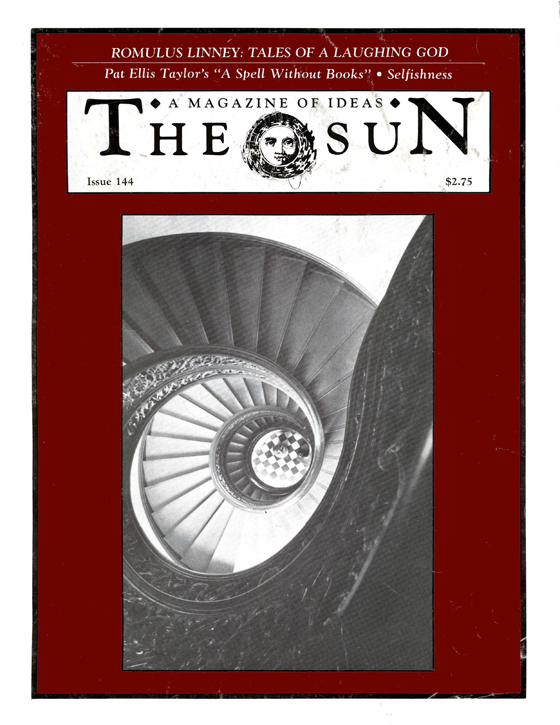 The Man Who Killed For Love

A Spell Without Books