The Hand That Shook The Hand | By David H. Manning | Issue 146 | The Sun Magazine
close

I didn’t go to my grandfather’s funeral. I had excuses at the time — I was living 500 miles away, no money for plane fare, other obligations, and so forth — but mostly I suspected that funerals were some kind of superstitious pagan ritual. My grandfather had been very much a part of my life and I saw no reason to break that thread.

I saw him the night he died. A dream maybe, but different; an alternative, but perfectly natural, state of presence. He was in the dining room of his house in Rutherford, New Jersey. (Actually, it wasn’t the dining room anymore but we still called it that. My generation alone had gone through several dozen holiday turkeys there. In later years, he moved the table out and put in a bed; his bedroom had been on the second floor and a few heart attacks had given him a careful respect for stairs.) He was sitting up in his bed that night. A reading light lit just the head of the bed and I was standing next to it, in the dark. “Tell your mother everything’s all right,” he said to me. That was all. Nothing strange, or eerie — just a simple, normal request made without ulterior explanations.

I gave my mother the message. But I didn’t understand it until recently.

I was one of nine grandchildren and Grandpa was very much the center of our collective lives, a unifying force that created a strong sense of belonging. He had a way of making me feel like a special individual; not among the nine, but for being one of the nine in the first place. As we grew into adolescence, we secretly vied for the title of Black Sheep, but we were very much a flock in our younger days. He led us on with a solid, down-to-earth confidence; not macho, or swaggering, just a friendly “go-to-it,” don’t you know.

He lived in Rutherford all his life. His parents had immigrated there from Council Bluffs, Iowa. Great-Grandma, in fact, was named Iowa. Great-Grandpa was William Richard Huntington, and Grandpa had a “Junior” at the end.

Fearing that his son would turn into some kind of “eastern sissy,” Great-Grandpa shipped him out west to work away his high school summers as a cowboy — ranch-hand really, but it was pre-World War I and the West was still, barely, wild enough to be capitalized, at least in his stories. There was the time he was knocked out by the jackrabbit; the time the older ranch-hands put a burr under his horse’s saddle; the time he was attacked by an eagle; the gunfight over the waterhole; life in the bunkhouse; shooting at the horse thief while riding alone through the wilds of Yellowstone. When he finished a story, he’d shake hands with his listener and say, “You just shook the hand that shook the hand of Buffalo Bill.”

None of the stories quite came to fruition — when you got right down to it, they were just would-be gunfights, almost horse thieves . . . the hand that shook the hand that shook the hand. But he was a masterful storyteller, and he filled our heads with tales as wondrous as the artifacts up in the attic. As we grew up, he distributed amongst us the old guns, snakeskins, chaps, buffalo horns, and silver dollars. The guns were reserved for puberty-aged boys. I can’t remember what the girls got. But there were nine silver dollars, dating from the year of his birth, and nine grandchildren. Things always came out right, at least to his satisfaction.

At the end of our annual Thanksgiving gathering, we burned letters to Santa Claus in preparation for our annual Christmas gathering. (The fireplace was a kind of altar — a model covered wagon drawn by a team of ceramic horses on the mantle, and one of those Wild West paintings hanging over it.) It wasn’t until many years later that I learned the trick of those letters to Santa: he made a switch, keeping our secret gift wishes in one pocket while burning the blank pieces of paper he’d planted in the other. That way, Santa always left that one special gift for each of us under Grandpa’s tree. This more than annoyed my mother.

As a teenager, he fell in love with Hedwig Harriet Emma Marie Schroeder. Huntington soon was added to the list. Her German names probably caused them some difficulties in conservative, suburban Rutherford during World War I, but to Grandpa, his young wife and emerging family were all that mattered. After the war, they settled into the house they built on Riverview Avenue, and filled it out with three children and a large, sociable circle of friends. He never went back to the West, or even west — probably afraid the reality would shorten his tall tales and lengthening memories.

His major talents were storytelling and making the listener feel important. He became a successful insurance agent. Although not particularly intellectual or creative — he may never have read a book in his life — he planted one foot in the door to Bohemia. He was the insurance agent for a handful of downtown New York artist types, held season tickets to the opera, was treasurer of the founding board of the New School, hung out with bandleader Fred Waring, and was the bridge partner of Dr. William Carlos Williams. But he never understood why a man with a perfectly good medical practice would taint his reputation with all that poetry nonsense. Dr. Williams consistently offered him signed first editions and he consistently declined them. “Give it to someone who’d understand it,” he said.

He was as successful as he wanted to be, neither more nor less. The hand that shook the hand was close enough to fame and fortune. Recognition for his work with the Red Cross in World War II led to political opportunities that he was just as glad to decline. He spent his summers — and autumns in later years — bluefishing at the Jersey shore.

The last time I saw him in person was in 1974, soon after my grandmother died. They’d been married nearly sixty years. He visited her grave every time someone with a car dropped in, so he asked me to drive him to the cemetery.

It had rained recently and the jar of flowers had sunk with the settling dirt. Aside from “seeing” him the night he died, my last image of him is kneeling in the mud by Grandma’s grave, straightening out that jar and filling it with fresh flowers.

He wasn’t really in his bed in the dining room the night he died. He was in the hospital, having checked himself in; after a few heart attacks, he knew the signs pretty well. My uncle was with him when he died; my mother and aunt were out of town. In a way, this was the larger tragedy. In his later years, they’d all fashioned their lives around Grandpa’s needs — taking him to the nursing home to see Grandma, taking him to the cemetery to see Grandma, persuading him to live for a while with each of them, and then helping him get by when he insisted on living alone in his own house; generally being there in case something happened.

His death was the only family event in nearly sixty years that my mother missed. Back then, I assumed that’s what his message to me was about: “Tell your mother everything’s all right.” All right that she hadn’t been there, or something like that.

A few weeks ago I went to Rutherford for the first time in twelve years. My brother met me at the train station and we visited some landmarks: where I lived until five, where I went to kindergarten, where I was baptized, the park where the band gave concerts on summer evenings — places shared with three prior generations. The town seemed to be going through a revitalization — except Riverview Avenue. Grandpa’s street felt shrunken, decayed. His little patch of land and garden had been eaten up by a driveway, garage, and monstrous addition on the house.

I passed a median point a few years ago where I’d spent the larger part of my life away from Grandpa, living in my own context. It was about the same point that regret for missing his funeral began seeping in. So I had my brother drive me to the cemetery in Lyndhurst.

Grandma and Grandpa, along with Great-Grandma and Great-Grandpa, are buried on the top of a little knoll at the highest point, surrounded by other family and friends — much like those gatherings in the dining room over the years. He didn’t have to be there for me to have a talk with him. He’d taught me to shake the hand that shook the hand, so the presence of the party of the first part wasn’t all that necessary. I knelt by the grave, just like he’d done at Grandma’s grave that last time I saw him. The earth was the hand that shook his hand, and in touching it I could hear his voice — something I hadn’t been able to do for a long time.

When I stood up, I looked at the gravestones. The dates showed that Grandma had been born two years before him and had died two years before him. This simple fact produced a clear, precise revelation: he had waited two years after Grandma’s death so he could catch up to her — fill that eternal two-year gap between their ages. He died at the exact moment he wanted to, just like when he left for work or a vacation or — for that matter — anywhere. He chose his moment in the same deliberate manner he’d done everything. Then, with a little twist like the letters to Santa or the hand that shook the hand, he gave me the message to give my mother. Perhaps he meant it for me, the messenger, as well. But I had to have my funeral with him to find out what he meant. 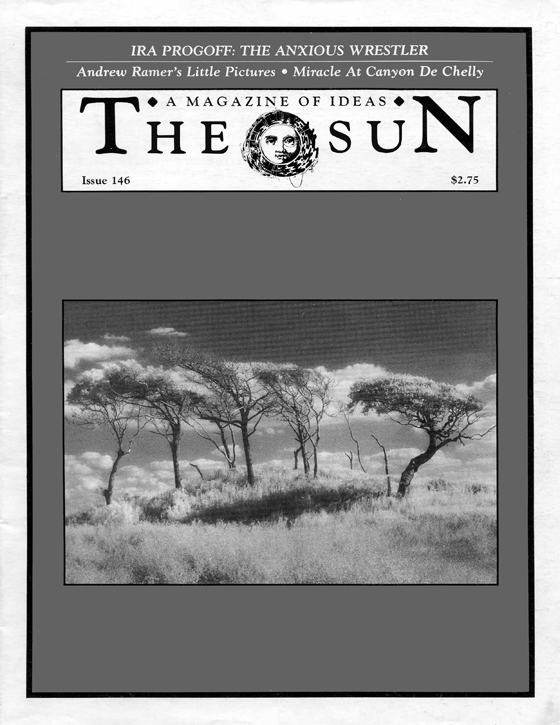