She was chaste and chased. Miriam saw the men looking at her as she dove into the swimming pool, her body a golden promise. She felt the pleasant pressure of their desire as she swam, her arms slicing into the water, her legs a delicate flutter, hair streaming behind her.

The older man, a mezuzah around his neck, a seltzer in his hand, watched Miriam. His blue trunks were too long beneath a strong swell of belly.

The other, younger man, black hair on the sleek curves of his chest, lounged beside a dozing wife. Miriam knew he was admiring the strength of her arms, the power of her legs.

He held Miriam’s smile, and rubbed it like soothing oil across his chest. His eyes massaged her shoulders as he pulled from his hand the wedding band, and laid it, an empty circle, on the back of his sleeping wife.

And then the boy, her age — maybe sixteen, maybe seventeen — lovely, smooth, and shy. Even though he was hunched over, his hands clasped in his lap, his straight, long toes dabbling in the water, she could see his erection.

They were hers, and she chose the strokes. The quick thrust of the breast stroke, fingertips quivering up her side, her eyes out of the water, letting them know her. The rush of the side stroke, water flowing through the spread of her legs, and teasing under the stretch of her arm. A dream of a back float, sculling with dazed fingers, letting the light bleach her mind.

Water flew into her mouth. She coughed and treaded water, her eyes smacked by the sun, looking for him. And there, pale as almonds, he waved to her from the shallow end.

“Miriam, come on. Your mother’s waiting.” Her father’s arms were popsicle sticks against the thick burgundy of the towel he held. And his moustache, heavy and sad, gave his face its strength.

Slowly she swam toward her father, crawl stroke, her head out of water, so she could look at each of the men, burn them into her heart, and let them go.

She was no longer theirs, her look told them. She flipped her hair away from her face, making a slow, sensual climb up the ladder, the water dropping from her rich thighs. She had never been theirs: she was her father’s.

Her father looked businesslike even in his swim trunks. “Your mother’s waiting in the coffee shop. She’s getting irritated.” Miriam followed her father into the lobby.

“Why don’t you change, then come right down. Your stroke looks good, baby.” Ash from her father’s cigar smudged the royal blue carpet. He punched the up button, gave her a hug, and walked away.

“That boy only wants one thing.” Her mother had said “thing” as if it were a sack of garbage.

But Miriam wanted that thing, too. Miriam dreamed of Richard naked in her bedroom. Richard, looking at the white confirmation Bible, pristine, with a gold leaf, and the drawers stuffed soft with silk panties. Richard, blond and experienced with two years of college, taking her on her sweet little-girl bed.

If only she could have stayed home, Richard would have been hers.

Her mother stopped spreading the cream cheese on her bagel long enough to give her a look — the look that said, “I know everything about you.”

“I lost track of time. Sorry, Mom,” Miriam said, as she looked back, taking in her mother’s perfect fingernails, like poisoned blood against the knife’s silver handle, her mother’s hair, stiff and blond, her mother’s hot pink blouse opened low, sharing sun-touched breasts.

Once her mother had been chased. Boys couldn’t get enough of her. Or she, them. Miriam had heard her talking about it with her friend, Lynette.

“Marriage hasn’t stopped me,” her mother said, “only made me choosier.”

Lynette’s laugh spilling over like champagne, she asked, “What about Nathan?”

Her mother answered, her voice a diamond scratching glass. “He’s a sweetie. He loves everything about me.”

“Trash,” he would say, when he heard she was coming over. “What can you see in a woman like her?”

Could he not see her mother? Miriam wondered.

Her mother slowly bit into the bagel.

“Want me to drop you off shopping this afternoon, princess?” her father asked Miriam. He was opening another cigar.

Nathan let the cigar drop to the table.

“Thanks, Daddy, but I want to hit the beach.” Miriam sipped on her Diet Coke and scanned the room. Pastel old ladies too full of bosom and Russian tea. A man her father’s age crashing his ice cubes as he ogled her. Miriam smiled at him.

“Haven’t you had enough sun?” Her mother looked at Miriam suspiciously. The cream cheese had blotted the bright from her lipstick. Her mouth showed through, blank and pale.

“I’ll wear a T-shirt so I don’t get burned.” Miriam took a bite of her chicken salad.

“Well, you can drop me, Nathan.” Her mother leaned forward so Nathan could light her cigarette. Her mother cupped Nathan’s hands as if she were a lover, sheltering the flame, melting into Nathan’s dark eyes. Nathan’s hot smile back reminded Miriam of the man wearing the mezuzah. Nathan’s smile poked Miriam hard in her stomach.

How can he love her? Miriam thought.

“Bye, Dad, see you at supper.” Miriam’s hair fell across her father’s face as she kissed him goodbye.

Her mother’s fingernails, crimson warnings, tapped hard against the table.

“We have reservations for 7. Be dressed and ready to go, Miriam,” her mother said.

A slant of smoke in return. Her mother smashed the cigarette through the center of uneaten bagel.

Miriam walked slowly, bare feet on plush rug. In her room, she flicked on the television and placed a call to Richard.

“Hello, Carla, is Richard there?”

“No, ma’am. He went to the club with Miss Cheryl. Any message?”

“No,” Miriam said quickly, as if she had a plane to catch, as if she were shooing flies away. When she hung up the phone, she cried. Her mother had won. Richard was out with that Cheryl Edelman, the gorgeous Bryn Mawr girl. He would be lost to Miriam by day after tomorrow when she got home.

Pulling on her bathing suit, Miriam scratched her thigh. Sunglasses hid the sadness; her mouth sunk to a pout. In the elevator, she stared at the thongs of the old, veined ladies and the tennis shoes of small boys, and didn’t look up until she got to the beach.

No one was in the ocean. Everyone lay flat on the beach, toes sunk into sand, elbows collecting grains. The waves a distant sound, a dream.

Miriam walked along the edge of the water, stepping on waves as they dared the beach; then she trespassed them, past the slither of seaweed tickling her calves, past the seagulls, the silver struggle of fish. She swam toward the horizon, toward a lonely sun and a sailboat. Pelicans cruised above her, dark and heavy, then sinking low.

She shut her eyes until she was nothing but a maiden lullabied by the water.

Miriam was surprised when her leg dragged against sand. The beach was empty, far from the tower of hotels. The sand was softer, white, strewn with only twigs and lost seaweed, and marked by a scuttle of hungry sandpipers.

Miriam lay on the sand, not caring that it clung to her stomach, nibbled on her shoulders, and sifted into her hair. When she awoke, the sun was playing low, leaving a cool trail around her shoulders. She stepped into the water to wash off. Shivers swept through her, and her skin prickled as the wind dried it.

The man came toward her, mezuzah bouncing on his chest.

“I hoped it would be you.” His voice was thick as kreplach, sweet as strudel. “Why are you so far away from everything?”

“You’re a beautiful girl,” he said. He stepped close to hold her hair in both hands. He smelled of sweat and Aramis, her father’s cologne. “I’ll bet you’re cold,” he said, and he held her as if she were a beloved child about to go on a journey. She could feel the promise of him against her, the push of his belly, and the thick sound of his breathing. She opened her mouth to him, and thrust her tongue between his lips. But he was cold as a guppie, and he broke away as if shocked.

“You’re a beautiful young girl.” The words floated behind him as he hitched up his trunks, and walked past her, until his legs became spindles on the beach. And she, a toy tossed overboard, moved on.

Miriam heard the stabbing cry of the gulls, and she saw the younger man step out of the ocean, the gold of his wedding band a shout against his dark hands. He ran fast and bright toward her, like morning sun, breathing down into her face, into her breasts, and streaking seaweed through her thighs. Every drop of his water pressed onto her, his teeth demanding her lips. He held her so tight her breaths were his.

A kiss sucked any protest from her. His hands were harsh, then velvet, as if already he knew her. Sweat and sand between them, they fell onto the beach. And afterward the man lay like a heavy dream across her chest, his face still as a sunset pool.

Miriam didn’t reach out when he got up. His face was closed now, his lips without the promise. His eyes, hard as her mother’s, held the same warning: “I know you. I know everything about you.”

Then he walked away, his swimsuit swinging from his hand like an unlucky fish, his white buttocks taunting her.

Miriam held her hand to her mouth, and tried not to cry. The blood from her lip was as red as the polish from her mother’s fingernails.

A mosquito enjoyed her. She stood, knees trembling. The sand joined with night, until each step became an uncertainty. They were waiting for her, her father reading his newspaper, her mother fixing her face, so she would be more beautiful, more powerful than Miriam. They were waiting, but Miriam could not move any faster. The sun, with its last breath, had taken her.

“Hi.” The boy, a blond in a skimpy bathing suit, walked down the steps from the hotel pool.

“Hi.” Miriam’s voice a small dove in the breeze.

“Want to swim with me tomorrow?” His body golden, smooth, new.

She walked to the pool, and he followed her.

A high-heeled clog, a smear of suntan oil on the cement. An old lady reading under the bright floodlight. The water hollow with disuse.

The boy watched, his shadow casting a net of safety across the water. She could feel him memorize her body as she swam back and forth down the length of the pool.

She smashed her legs against the surface, and kicked until the moon split the sky.

She didn’t look at the boy as she climbed out, the night wind biting at her skin.

Her father wrapped the towel snugly around her. Miriam let him hold her, his arms a precious circle, as if she were a little girl, as if she still belonged only to her father. 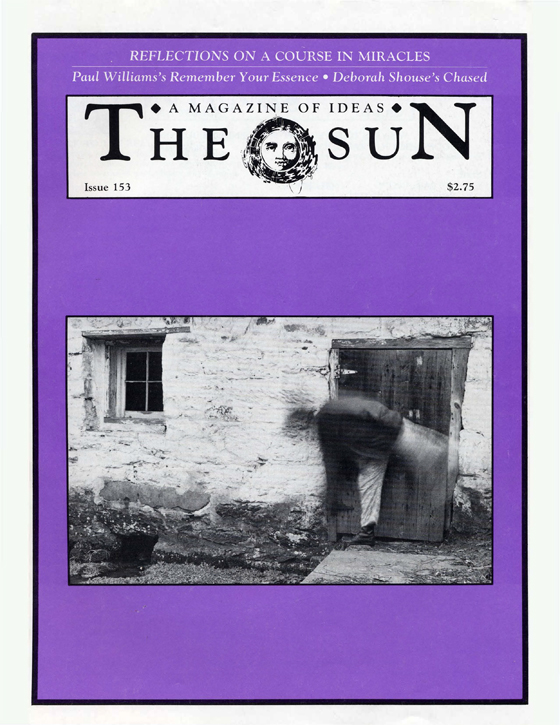 A Dictionary Of Childhood