“Alzheimer’s is a diagnosis of exclusion,” the doctor says.

The train lurches between the back yards of Illinois. In Illinois, in September, flowers crowd the roadbed — red, purple, gold. Luminous. I link my fingers around a glass of beer and watch my childhood landscape roll out, flat as memory. Houses, barns. Fields, the corn cut to a gold-brown stubble. Laundry spread between poles. A cluster of silent cows.

My stepfather is tall, straight, dictatorial, German. He has been my mother’s husband for more than a decade, but he had no part in my growing up. There is no better word for his relationship to me, so he is my stepfather. It is to my mother, now, that he is a father. She is a child under his rule, but his rule is benign. He sings her German lullabies as he takes her to her bed.

It is one of the better times. My mother is fixing frozen dinners, walking around almost freely in her familiar kitchen. Her legs are slim, unmarked; they look oddly young. In this kitchen, when I was growing up, she roasted turkeys and hams, baked casseroles and cakes and tall, sweet yeasty buns.

The doctor is matter-of-fact. “You don’t ever know what it is really,” he says. “Alzheimer’s is a diagnosis of exclusion. You rule out other things.”

“How long will I be able to keep her at home?” my stepfather asks.

For a second, no more, he lets his eyes meet first my stepfather’s, then mine. “Old age is no pretty country,” he says, not in the doctor voice.

My mother, frowning, studies her appointment book. “I have ‘doctor’s appointment’ written down,” she says. “Am I supposed to go to the doctor?”

“We did that already,” I tell her. “Yesterday.”

“I have ‘doctor’s appointment’ written down. Am I supposed to go to the doctor?”

“No. You don’t have to go to the doctor anymore.”

“I have to write down the doctor’s appointment.”

“Sometimes I like to write things down,” my mother says.

“I feel so alone,” my stepfather tells me. “Our friends have died. The ones who are left avoid us. It’s as if she had something catching.”

“Don’t you want to bring her where I live?” I ask, as I have asked before. “Or where your sons are?”

“No,” he says again. “This is her home. Any place else, she wouldn’t know where she was.”

I am alone, too. I am not in this with him. He is in his place and I am in mine, and each of us is alone. It does not have to do with geography.

My mother looks at me and says, “And which of the babies were you?”

“My baby?” she says, anguished, not remembering. “Do you have any brothers and sisters, dear?”

“No,” I tell her. “I was your only baby. I have children. Maybe you’re thinking of my children. Your grandchildren.”

She sighs. “I have trouble telling which of you is which.”

“We look a good deal alike, now that they’re grown.” I laugh, socially. Save the situation, just as she would have tried to do once.

“And who was your father, dear?” she asks me.

I have not been close to my mother. We have been friendly, conventional, conversational — not close. I felt her love as a black hole, waiting to suck me in. I danced cautiously around its rim. Now it is safe to come close. It always was safe.

Even knowing this, even now, I can’t approach.

They are taking naps. I walk. The park where I played as a child is a graveyard of brave, abandoned projects, flashes of community spirit. The jogging trail is blocked by fallen branches. The duck lagoon is covered with scum and McDonald’s bags. In the touch-and-smell garden for the blind, only bronze Braille signs standing in leaf-matted plots remain.

I lean against a tree and pull off my shoes. The earth is cool underneath my toes. Porous black earth. Illinois earth.

A line of children files past, led by a hearty woman in khakis. I used to follow in such lines. The hearty women explained to me about the plants and the trees, and showed me the creatures that dug the little mud chimneys beside the lagoon. I rolled Easter eggs down this hill. Along the inside of this dam I made, with my friends, a journey forbidden to us. I remember how strong the water was, how it nearly swept us down and through and underneath the road. I remember we held our own.

My own years stretch ahead, not far, bounded. If the light begins to fade for me, will I have the understanding and the courage to reach out and switch it off?

“I’m so disappointed you don’t have time to come to church with us,” my mother says.

We say these things to each other again and again, while we dress for church.

“A diagnosis of exclusion,” the doctor says.

We sit in a row close to the front, so my stepfather can hear. My mother stares vaguely, thinking whatever thoughts she thinks. She is shrunken, her hair badly combed. She is like those destroyed old ladies from whom I used to look away so quickly when I was a child.

The minister is young. His fingers curve and spread and dance. His sermon is tasteful, having to do, I think, with the benefits of constitutional democracy. We stand, we sit, we sing. We bow our heads imperceptibly in prayer. It has been a long time since I was able to believe, but the atmosphere is soothing.

The minister gives the benediction. I look up to see him standing over me, us, with his arms outstretched. He is calling down a blessing, from somewhere, on us.

I find I am crying. I find that I want, now, desperately and with all my heart, from anyone who will give it or seem to give it or pretend to give it, a blessing. 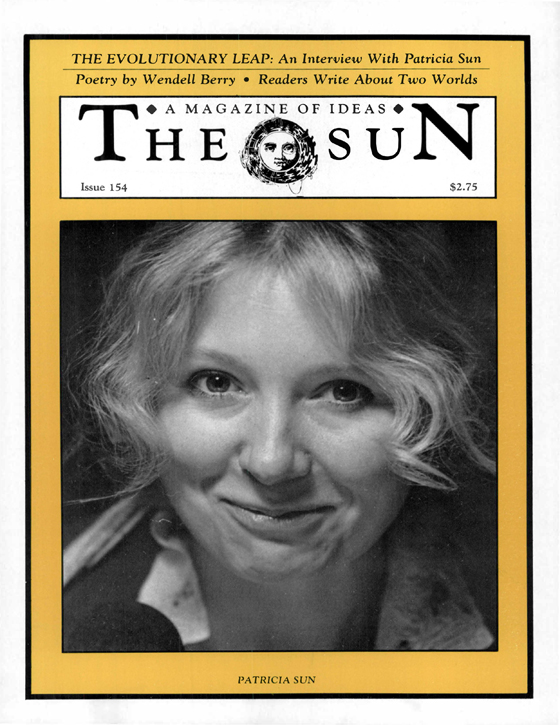