On Our Fifteenth Anniversary

Someone asked me recently how I raised the money — or, as he put it, the venture capital — to start The Sun. I told him it was easy: I borrowed fifty dollars from a friend.

I don’t know if I’d be brazen, or naive, enough to try something like that today, though I hope the years haven’t made me too cautious. Sometimes we need to avoid “reality,” to proceed with calculated blindness, to take a chance. I mean, if we were less naive, would we ever start anything? If our parents had been less naive about what they were getting into, how many of us would be here today?

I didn’t realize back then what it meant to publish a magazine and, after all these years, sometimes I still don’t. Yet this is The Sun’s fifteenth anniversary; hooray for naivete.

What a rich, improbable journey: the financial worries; the preposterous deadlines; the blessedness of one issue after another somehow making it to the printer and then to you; the tangled lives and dreams of the people who have worked here; the wish — or is it the obsession? — to make each issue better than the last. Yes, always the desire to find the right words for what words can never express — to climb the unlikely sentence; to shimmy out along the slenderest branch; to take a chance.

These days, with nearly 10,000 subscribers, some of the challenges are different, while others remain the same. Paying the bills is less worrisome, but a tremendous amount of work still goes into each issue; deadlines are still deadlines. I pause between issues, but too briefly, like a soul poised between lifetimes, eager to incarnate again: no sooner is one issue done than it’s forgotten; ghostlike, it recedes, while all my attention is focused on the next. Oh restless soul, impatient to get on with it! The real risk is in getting so absorbed in the work that I forget why I’m here, in being more devoted to The Sun than to the light it can only imperfectly reflect.

Yet I’m thankful for this challenge, which may be another example of my naivete. In this shabby old house on Rosemary Street — this house that still fits us, but just barely, like a rumpled sweater with too many holes — I’m given the chance, month after month, year after year, to shape my questions, my enchantments, my disenchantments into this magazine. There’s nothing else I’d rather be doing, no place else I’d rather be.

Your fifteenth anniversary issue with the amazing picture on the front — “nowhere but The Sun,” I thought on first sight — inspires me to offer congratulations and some notes of gratitude. As I communicate with an increasing number of editors, both mainstream and backwater, my estimation of The Sun rises steadily. In the realm of integrity and perseverance, you just about stand alone; and one of the few truly encouraging developments of modern civilization is that your circulation has recently been on the rise. It suggests that there really is an “audience” for wisdom out there, and you know that I mean wisdom as something practical and attainable, though definitely not purchasable.

I also know and appreciate that I can send you a feature interview with all the depth and width I want to give it and you won’t screw it up with a stupid headline or slanted re-writing. Let me tell you — this is rare!

D. Patrick Miller Berkeley, California
More Letters
Thank You Your donations helped to keep our ad-free, nonprofit magazine in circulation last year, funding everything from production to distribution. Learn how you made a difference last year. Learn More 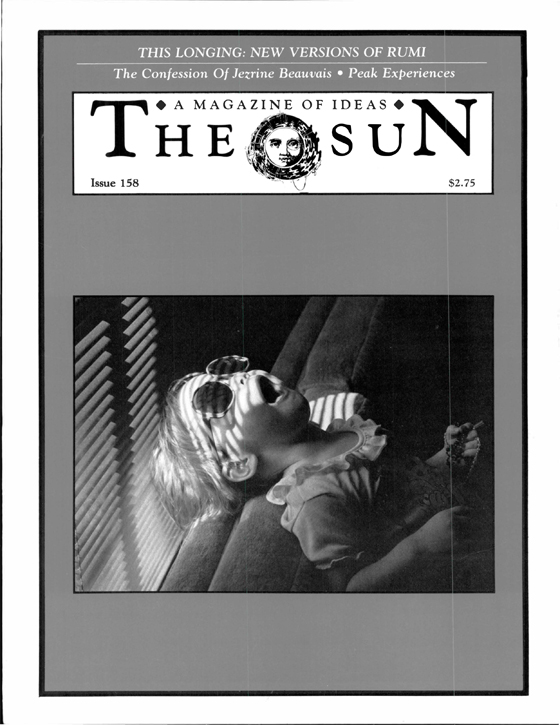 By Yaël Bethiem
The Sun Interview

Michael Helm On The Virtues Of Junk

This Longing: Versions Of Rumi

The Confession Of Jezrine Beauvais