A few old men were sitting in front of the store, watching a car come through the heat waves. The buzzards rose up from a dead dog to let it pass.

Buddy came out of the store and said, “Sho is a hot one.”

“Ain’t it the truth,” said one of the old men, waving at the car as it went by.

Buddy sat down on a step and poured a nickel-pack of peanuts into his RC. He took a drink, chewed the peanuts, and said, “Durndest thing happened to me today.”

“What’s that?” asked one of the old men.

“ ’Bout noon I was headed home for dinner. Been fixing fences all morning. Was headed ’cross that big pasture of mine when a flying saucer landed in front of me.”

“Bet that scared the bejesus out of you,” said an old man, reversing the way his legs were crossed.

“Durn right, it scared me. Ain’t used to things like that. Great big thing, the color of chrome, shaped like two hubcaps stuck together, their insides facing.” Buddy held up his hands, put together to demonstrate the shape. “Had all kinds of lights and things on it.”

“Say it landed right in front of you?”

“Yep, ’bout as far as from here to that there tree. Just came straight down, didn’t make a sound.”

Buddy took a drink and before he was finished chewing the peanuts said, “Well, I would of, but they paralyzed my legs. Duke’s too. Should of seen him growling. Made him real mad.”

The old men made various throat-clearing noises, then one of them said, “How’d they do that?”

“Some sort of invisible beam, I guess. Anyway, me and Duke couldn’t do nothing but stand there. Then, this door let down and out came these things that looked like purple octopuses.”

One of the men snorted, then two others made similar sounds.

“Anyway, ’bout five or six of these things started coming toward us. They were the ugliest things you ever saw. They were walking on the tips of all those legs toward us real —”

“How big were they?”

“ ’Bout my size. Anyway, I was getting kind of worried and ole Duke’s gone plum crazy, barking and trying to get his legs to move.”

Buddy took a long drink and chewed the peanuts slowly, waiting for one of the old men to ask what happened. They just stared across the road.

“So they came up and stood there balancing on the tips of their legs. I figured they were trying to decide which one of us was the smart one. It shouldn’t of been hard. Duke was making such a fool of himself, foaming at the mouth and trying to bite them. I figured they were gonna say, ‘Take me to your leader,’ but —”

“If they had, you would of had to take them to Martha.”

All the old men got a chuckle out of this. Buddy ignored them and went on, “Well, that’s when they took hold of us and took us into that saucer.”

“Bet that scared the bejesus out of you.”

“You might say that.” Buddy finished his RC and, like the old men, watched a car come down the road and the buzzards rise up from the dead dog.

“So they took us inside. Everything was this weird color, sort of like oil on water. Then they laid us out on tables. I thought me and ole Duke were goners for sure.”

“Shoot, think by then I’d be doing some fightin’.”

“You think I didn’t try that when they started dragging us toward the saucer? I had my ax with me, tried to hit one of them on what I figured was his head but he took it away like I’d take a sucker from a baby. Couldn’t do nothing against them. Each one of them had eight arms and each arm strong as a mule —”

“I done told ya they were like octopuses.” Buddy cut a chew from his plug of tobacco and worked it a while before he started talking again. “Ole Duke done lost his voice from barking so much and I gave up struggling ’cause that was useless and tried reasoning with them. Told them dogs and people ain’t considered good eatin’ on Earth, that they ought to try hog or cow or chicken —”

“Why didn’t you take them home with you and let them try some of Martha’s cooking?”

Most of the old men laughed.

“Anyway, I don’t think they spoke English and, besides, I didn’t see no ears on them.”

This time the car came from the opposite direction. They all waved, then watched the buzzards settle back down on the road after the car passed.

“But they weren’t putting us on the table to eat. What they wanted to do was tap our minds.”

Buddy spit and said, “They wanted to tap our minds. Find out about the Earth by finding out all we knew. Course, I didn’t know that until it was all over and I started putting two and two together.”

Buddy stood up and stretched, walked over to the edge of the shade, and stared across the road. “Then these wires and things came down from the ceiling and they put them on our heads. Didn’t hurt. Matter of fact, I suddenly got all calm and relaxed. Guess Duke did too ’cause he finally got quiet.”

Buddy spit, then went on talking with his back to the old men. “Now, what happened next is hard to describe ’cause there ain’t no way to do it justice. All these memories flashed before me real fast and clear, like they were being drawn out of my head and I was latching on to some of them. But, it weren’t like remembering. It was like living that moment again. Actually being there. For a second I’d be a little boy with a June bug on a string, making it fly circles around me and I’m really there, standing in the sun and the sun’s falling off that June bug’s back like little diamonds and I’m happy but sort of lonely too. Then, I’m shooting marbles or opening Christmas presents or watching an airplane. . . . I even remembered being born and sucking my mama’s breast. Could taste the milk. . . . One second I’m crying ’cause I’m little and lost at the State Fair and the next I’m shooting that Kraut I shot during the war and the next I’m getting nookie for the first time. . . . I was laying on that table laughing and crying and being sad and happy and lonely and loved all at the same time. Then, we were laying in the broomsedge and they were gone.”

Buddy spit. “Neither one of us could stand up. We just sat there looking at each other for a while, then we got up and walked home.”

“Shoot,” said one of the old men, reversing the way his legs were crossed, “nothing like that ever happens to me.” 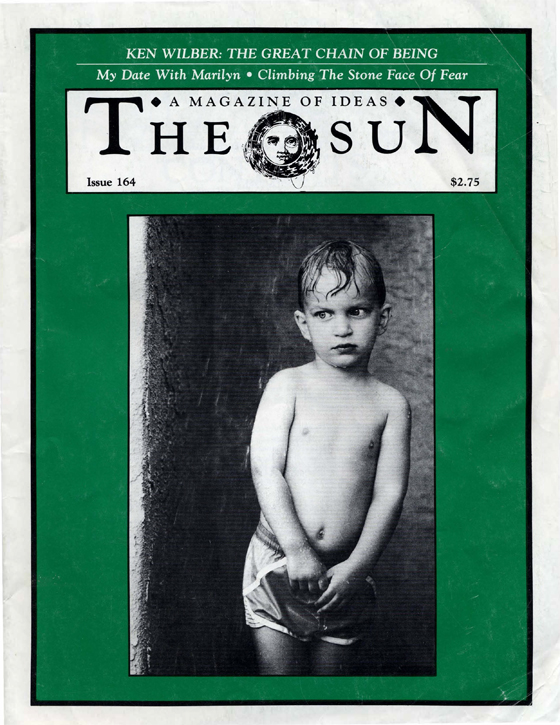 The Great Chain Of Being

An Interview With Ken Wilber

Climbing The Stone Face Of Fear