The old man had walked a long way, from afar, and he was not well. He wiped his forehead and raised his head. Around him were sand, thistles, and strangely — where did it come from? — a house.

The old man hurried on. He tightened the belt of his faded trousers, drank some water from a flask hung on a strap, and stumbling in the burning sand, with both great effort and confidence, he advanced toward the house.

The house was a ramshackle old structure, but freshly painted. A light shone from the small window, although the angry sun had not yet set. A dirty, lazy cat lay at the front door. Over the door was nailed a rough board with what seemed to the old man an idiotic inscription: “Sheltr for Sad Ould Men.”

He bent over the cat and, still looking at the sign, murmured ingratiatingly, “Kitty, kitty!” The cat turned round and went off behind the house.

The old man knocked at the door. He knocked again, louder. The door opened and he went in.

Immediately he stumbled over something. It was a child’s toy, a plastic doll with a grown-up coiffure and brightly painted lips. “Damn!” said the old man, and kicked it. He did not like children or anything having to do with children, probably because he had been alone and lonely for so long. “Damn!” he said again, stepping on a bedraggled teddy bear. He picked it up, looked at it in bewilderment, then threw it on the floor, raising his foot to kick it as he had the coquettish doll. Suddenly he stopped.

Then he composed himself and asked cautiously, “Children? Hey! Where are the adults? Where is your good papa? Where is your nice mama? Why don’t you answer, children?”

The house was empty. It was an ordinary house: there were houses like this in the village of his childhood. Could it have been brought here by some devilish force, here to the sands of Karassoli? But the old man didn’t believe in miracles. A house? Here? In the desert? Well then, it was simply meant to be.

“I’ll have to find something to eat,” he thought. “And I wouldn’t mind a drink. Then I’ll have a short nap, or else, if the house isn’t abandoned, its crazy owners may show up and turn me out, for all I know. Wait and see, they’ll punch me in the face to boot.”

He found only some cream of wheat, still warm in a saucepan, and some recently boiled milk. In a corner of the room stood a neatly made trestle bed. The old man lay down, pulled over his head a blanket gaily sprinkled with bright butterflies, bugs, and dragonflies, and muttering disapprovingly about his bedclothes, fell into the sound sleep of the desperately exhausted.

He was awakened by the noisy clatter of children and by someone looking down at him. “They’ll throw me out,” thought the old man wearily, “by the scruff of the neck. That’s for sure.” He cautiously opened his eyes. Near the bed stood a middle-aged woman, looking at him with curiosity and tenderness. Two boys, one of them about five and the other about eight, were playing a rough game. The old man got up uncertainly and barked with hostility, “Well, I spent the night here in your house, had a bite to eat. Where else could I go? Fall down dead maybe? I’ve walked all the way from Croydon — that’s no joke.”

The woman said nothing, but kept looking at him. The old man was confused. He turned away from her and began to tighten his belt. Suddenly he saw something he hadn’t noticed the evening before in the faint light of the lamp: right over the head of the bed hung a photograph of his wife, who had drowned thirty years before.

His wife had left him alone with a three-year-old daughter. He had entrusted the girl to the care of his mother and had signed himself up as a sailor on the first freighter out, to calm himself and to forget. When, a year later, he returned, he found neither his mother nor his daughter. People said that his mother had died in a flu epidemic. Having no other relatives, the little girl had been taken in by neighbors who felt sorry for her. But soon they had left the area, taking the child with them, and no one knew where they had gone.

The old man looked numbly at the photograph. “How did this get here — into your house?” he asked at last. “Have I gone crazy? That is my wife!”

“That is my mother,” said the woman softly. “So we have met, Father.”

By the end of the day his grandchildren were playing constantly at his side. They rarely took their devoted, joyful eyes from his face.

The woman sat beside him, stroking his thin hand that trembled at every word, and she listened too.

It was very late when she put the children to bed. Before they went to sleep, the boys gave the old man their teddy bear. The younger one said, “Grandpa, I know how to write already, almost without mistakes. Look!”

He took a piece of cardboard from the floor and wrote on it: “Sheltr for Sad Ould Men.”

To the old man these words seemed vaguely familiar, but try as he might, he did not understand why. He also lay down and soon went to sleep, hugging the cardboard and the teddy bear.

Sand, sand, uncaring, eternal sand of Karassoli. Nothing but sand. With almost imperceptible movement, rustling lazily, the dry sand sucked in the dry body of the old man, who had taken leave of life, and with him, clutched to his breast, the bear and the cardboard with the childish scrawl. 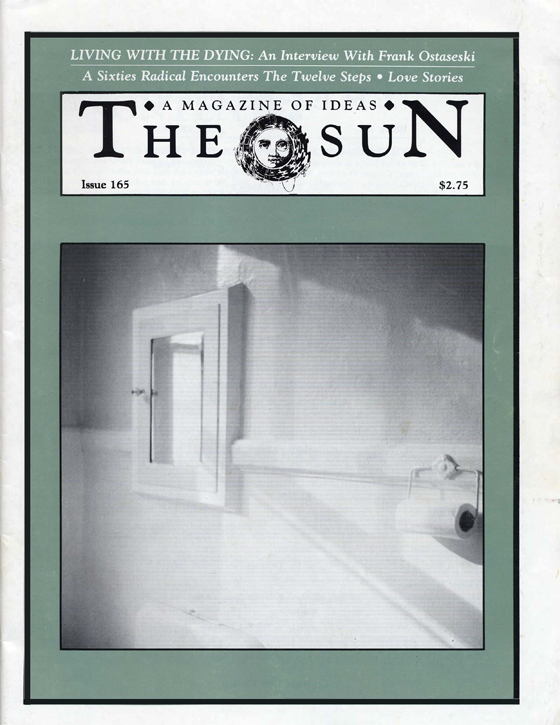 Living With The Dying

An Interview With Frank Ostaseski