You’ve never seen death? Look in the mirror every day and you will see it like bees working in a glass hive.

Without your wounds where would your power be? The very angels themselves cannot persuade the wretched and blundering children on Earth as can one human being broken in the wheels of living. In love’s service, only the wounded soldiers can serve.

Draw your chair up close to the edge of the precipice and I’ll tell you a story.

The irony of man’s condition is that the deepest need is to be free of the anxiety of death and annihilation; but it is life itself which awakens it, and so we . . . shrink from being fully alive.

I know something about dread myself, and appreciate the elaborate systems with which some people manage to fill the void, appreciate all the opiates of the people.

Carrying a medicine for which no one has found the disease and hoping I would make it in time.

In the cellars of the night, when the mind starts moving around old trunks of bad times, the pain of this and the shame of that, the memory of a small boldness is a hand to hold.

Love the moment and the energy of that moment will spread beyond all boundaries.

In God’s economy, nothing is wasted. Through failure, we learn a lesson in humility which is probably needed, painful though it is.

His wit was usually aggressive. Sometimes he chose the rapier. Lady Astor neither gave nor asked for quarter, and she got none from him. At a dinner party she told him, “Winston, if I were your wife, I’d poison your soup.” He replied, “Nancy, if I were your husband, I’d drink it.”

All cruel people describe themselves as paragons of frankness.

It had always been pride that had held me off from Him. Now that it was broken the obstacle was gone. One is never simple enough, while things go well.

Loran Hurnscot, A Prison, a Paradise

Believe those who are seeking the truth; doubt those who find it.

Dali once took his pet ocelot with him to a New York restaurant and tethered it to a leg of the table while he ordered coffee. A middle-aged lady walked past and looked at the animal in horror. “What’s that?” she cried. “It’s only a cat,” said Dali scathingly. “I’ve painted it over with an op-art design.” The woman, embarrassed by her initial reaction, took a closer look and sighed with relief. “I can see now that’s what it is,” she said. “At first, I thought it was an ocelot.” 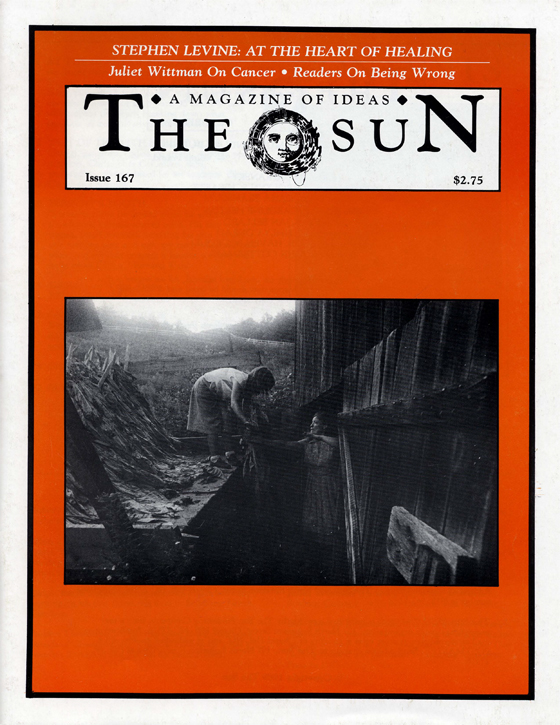 Best Of The 11th Street Ruse

At The Heart Of Healing

An Interview With Stephen Levine

Avalon And The Dinosaurs