Earth Day 1990 was generally characterized by celebrations, not protests. Yet, in New York City, more than 200 people were arrested in a Take It To Wall Street demonstration, which aimed at shutting down the New York Stock Exchange and putting the blame for environmental destruction where it belongs. Sparrow, a regular contributor to The Sun, was there.

I got arrested today, at the Stock Exchange, and it is eleven years since you and I were arrested there. That was my first arrest and this was perhaps my ninth. (I’ve lost count.) Being arrested at thirty-six, on Wall Street, yelling to incredulous brokers, “We’re against capitalism,” gives one a nervous happiness.

Yesterday was Earth Day, and I went to Times Square for the Earth Rising Ceremony. At one time it would have seemed idyllic to me — Paul Winter’s songs amid the movie marquees and Blimpies — but yesterday the music seemed middle-aged and vague.

The crowd was young, Long Island, and benign. I held a sign, PLANT BUSH IN THE EARTH. Many smiled, a number took my picture.

But this was not a real demonstration — it had something to do with “consciousness.” The world had changed, and our values were becoming other values. We hoped for a windmill on 42nd Street. Why? We didn’t know why. It seemed a thrill, as the first streetcar had. Saving papers and string, once the province of geeks, suddenly seemed brave.

We were all terribly sorry we’d made the earth pay for our pleasure these last 200 years. We had a fear-taste in our mouths. Maybe the earth is preparing revenge. In comic books, an exposure to toxicity creates superpowered heroes, but in this world we are not so lucky. Cancer, cancer, is all we get.

I sat on a police fence with my PLANT BUSH IN THE EARTH sign, watching it all go by. I imagined a reporter asking what my sign meant. “I mean he should be more planted, rooted, in the earth,” I would tell The New York Times. “It’s just a pun.”

After that I walked to 6th Avenue — stopping first at a lasagna joint — and saw the street fair, which seemed more “street” than “fair.” Thousands of couples filled the streets, passing between recycling bins labeled “GLASS,” “NEWSPAPER,” “ALUMINUM,” “TIN” — but nobody put anything in. Sometimes they’d glance at one of the exhibits, but no one lingered long. Instead, they ate sausages (somehow the sausage vendors, who attend every street fair, had infiltrated even this one) and walked with their arms protectively around each other, as if they were frightened of ecology — and who wouldn’t be, eating a sausage sandwich?

I tried out my sign, PLANT BUSH IN THE EARTH, and it was irrelevant. It was no longer Earth Day, it was New York City.

I stopped at one table, seeing maple syrup–flavored cookies. A young woman with freckles said, “Hi!” to me and I said, “Hi,” back, and I wanted to say something that wasn’t sarcastic. I couldn’t think of anything, so I went downstairs to the subway, where a four-piece jazz band was playing unruly music that struck me as sincere when I saw the saxophone player’s face. As apathetic as the slow ranks were upstairs, so was this saxophonist fierce. He looked, as saxophonists do, as if he wanted God to come down to earth and judge us.

On the D train a guy asked me how to get to the Big Earth Day Concert with the B-52s in Central Park, and I walked with him to the nearest subway map. Under it were three young black men, and pretty soon we were all laughing; I had unrolled my sign, and one of them confided that his friend, with the sunglasses, had just killed George Bush. “I was only kidding!” I protested. “I didn’t mean it. Really!”

The next morning I was down at Wall Street again. A woman banged a metal drum, and a hundred anarchists, many still teens, flowed down Broadway’s sidewalk, threatening to stop traffic. It was like a war, with the steel din, and shouts, and a feeling of holding your breath until someone was shot. (Later I saw a man get a concussion from a cop’s stick. The blood ran down his head as he was pressed against the wall of a corporate office, and I shouted, “I saw that! I saw that!”)

“Will this be in the paper tomorrow?” I wondered (and we were, my wife and I, in the next day’s Newsday: a lovely photo of a line of protesters — including us — about to be pierced by a stout broker, as Ellen looked off angelically, and I watched, curious.)

We blocked entrances; the undercover cops pushed us around; 204 were arrested.

During the day, I had some great conversations with stockbrokers, like:

Me: We’re not against you, we’re against capitalism.

Stockbroker: What do you know about economics?

Stockbroker: You know, you’re a fool.

Me: But in Shakespeare, the Fool is often right.

Stockbroker: I don’t have to talk to you.

Me: There’s no sense of responsibility to the ecological. . . .

Stockbroker: You think you can impress me with big words?

We completely failed to shut down Wall Street, except that the one thousand police kind of did it themselves, and wore riot helmets, and gave that Tiananmen Square déjà vu.

In retrospect, the stockbrokers seemed more desperate than we did. They’re facing big cutbacks, and we’ve made Earth Day a national holiday, like Veterans Day. One day, I believe, people will look back on Exxon the way we look back at the sale of slaves.

Ellen’s been carrying around our photo from Newsday and showing it to friends. It’s too bad; it’s gotten wrinkled, like an old man. I wish I’d spent another quarter for a second copy. We looked so innocent, so alert. Anique saw it and said, “You both washed your hair!” 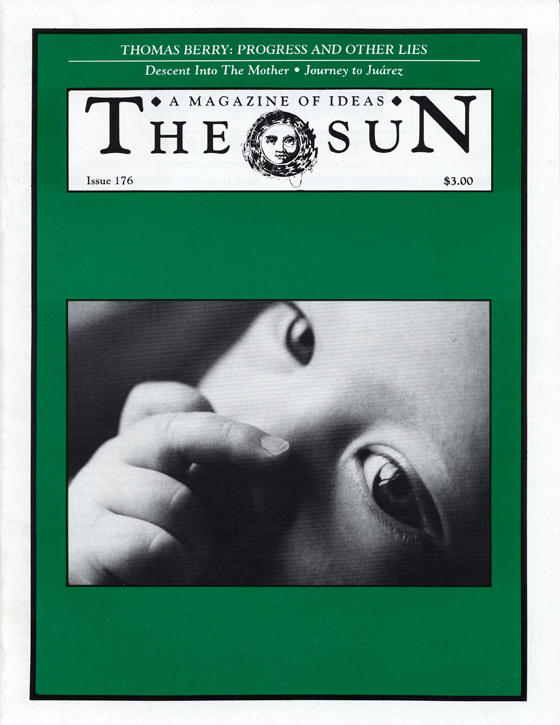