Leaving one son; going toward the other. Ted and I take turns driving, three hours each. My break comes at lunchtime. Then I can sit in the car and count the hawks in the sky. There are so many of them flying overhead, spreading their great, kitelike wings. I read that hawks mate for life. You see them in pairs flying everywhere.

We leave Teddy behind in Los Angeles. We flew out to see him in his first professional play. My son, seething under Brando steam. How did my curly-headed little boy turn into this hunk who all the women lined up to see after the curtain fell?

We leave him by himself in my hometown. Time has been compressed. Twenty-one years seem like nothing. Twenty-one years ago I was getting into a car and waving goodbye to my parents. Clutching my little baby Teddy to my breast, holding him on my lap in the back seat, while Ted drove us cross-country. Now it is little Teddy we leave behind.

All the cars and trucks are in a hurry. They seem oblivious to what is above and around them, this magnificent Southwestern country carved from rock, the saguaro cactuses with holes punctured in them. I was admiring them at breakfast, looking off into the distance, when the waitress told me, “Up close they look like old rags.”

Phoenix is too hot for Ted. I like heat. He tells me he feels “like a pancake grilled on a griddle in the sun.” I swim in the motel pool at night. Heat shadows embrace me. I am a fish woman, taking long, dreamlike strokes. Swimming in slow motion as if there’s no end or beginning to this trip. Swimming in limbo, as I did twenty-one years ago when we left Los Angeles for New York. Baby Teddy waiting on the sand for me to rise out of the water, a mermaid who soothed his teething mouth with her breast.

I call Johnny from Navajo country. He didn’t want to come on the trip to see his older brother in a play. Said he preferred to stay home. Fiercely independent Johnny, so eager to leave for his freshman year in college.

“How’s everything?” I ask him.

“You know I don’t answer questions like that, Mom,” Johnny says.

“Of course everything’s okay. Better, in fact, than when you guys are here. You two are too noisy.”

How he used to cry when I went to work three days a week. Now he’s so impatient to “get the hell out of this house,” to leave his room, the forest of color he painted all over the walls.

I’m embracing a petrified rock. It’s rainbow-colored like Johnny’s room. This rock has been here since before the dinosaurs. Ted takes my picture, but I don’t look at him.

I’m not the mother of two sons, each on opposite sides of this vast land. I’m not the wife of this man taking my photograph. No, I’m this rock; I hold it closely to my chest. Hawks fly over — peaceful, constant hawks. They cover great distances; their vision is eight times more powerful than that of humans. I wonder what it’s like for a hawk to look down on us, at the people swarming by in their toy trucks and trailers and cars, miniscule people in the cracks and crannies of the rocky earth.

We drive up to the mountains that surround Taos. Blue mountains like in a Japanese landscape painting. Birds with scalloped wings fly by. The air is warm. The altitude makes me giddy.

When we came cross-country twenty-one years ago, Ted drove all the way. I sat in the back, nursing and diapering Teddy. Now I’m in the front seat, driving, feeling the exuberance of wind against my cheek, earning my badge as a cross-country driver.

We enter a national forest, and suddenly we’re cloaked in darkness. Hard chips of ice pelt the car. Everything’s working at once — windshield wipers, defoggers, Ted desperately wiping the window with a rag — while I careen around a narrow mountain pass. It goes on interminably. It’s the middle of summer, but I have to turn on the car heater, in this dense Colorado forest.

We come out into the light and see the sun shining. Black Angus cows loll on a mountainside.

I remember pushing my sons in swings. First one would go high, then the other; they were like two dots in the sky.

In Tulsa, I have a dream about Johnny. He’s still a baby. In the dream I’m holding him, kissing his warm, sweet belly. In a restaurant in St. Louis, when I try to tell Ted my dream, I start to cry and can’t stop. Is it the wine, or the oblong orange moon that’s peering at us through the window?

When we step out of the restaurant, we look up into an ink-black night. Two white hawks spread their wings fanlike over us. 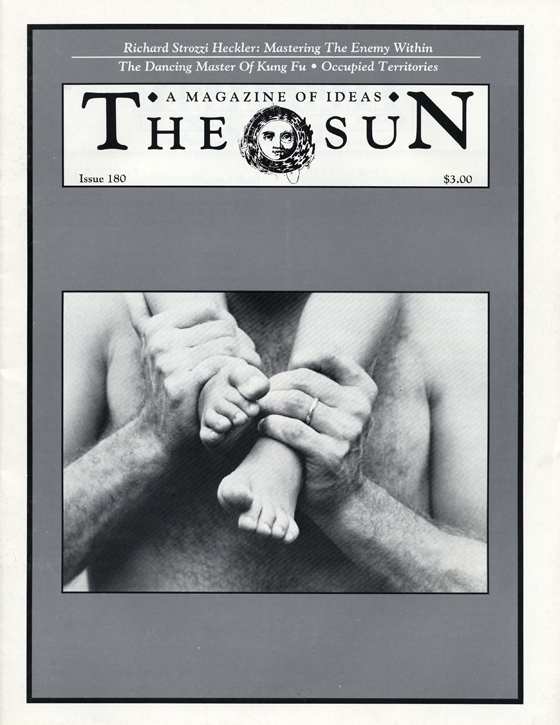 The Dancing Master Of Kung Fu

An Unwed Mother Says Farewell To A Small Town in Alabama