Thou shalt not kill.

War, to me, is the greatest weakness of all.

War is like love; it always finds a way.

Let him who does not know what war is go to war.

The possibility of a short and decisive war appears to be one of the most ancient and dangerous of human illusions.

War is the unfolding of miscalculations.

Barbara Tuchman, The Guns of August

How is the world ruled and how do wars start? Diplomats tell lies to journalists and then believe what they read.

We cannot have peace if we are only concerned with peace. War is not an accident. It is the logical outcome of a certain way of life. If we want to attack war, we have to attack that way of life.

Profits are springing, like weeds, from the fields of the dead.

Show me who makes a profit from war, and I’ll show you how to stop the war.

After each war, there is a little less democracy to save.

What does it matter to the dead, the orphans, and the homeless, whether the mad destruction is wrought under the name of totalitarianism or the holy name of liberty or democracy?

War is not an adventure. It is a disease. It is like typhus.

From the happy expression of their faces, you might have supposed they welcomed the war. I had met people who loved stamps, and men who loved stones and snakes — but I could not imagine any man loving war.

Men love war because it allows them to look serious. Because it is the one thing that stops women from laughing at them.

They were going to look at war, the red animal — war, the blood-swollen god.

If people want to make war they should make a color war, and paint each others’ cities up in the night in pinks and greens.

Man is the only patriot. He sets himself apart in his own country, under his own flag, and sneers at the other nations, and keeps multitudinous uniformed assassins on hand at heavy expense to grab slices of other people’s countries, and keep them from grabbing slices of his. And in the intervals between campaigns he washes the blood off his hands and works for “the universal brotherhood of man” — with his mouth.

Renunciation of world politics offers no protection from its consequences.

I shall die, but that is all I shall do for Death.

For a Christian who believes in Jesus and his Gospel, war is an iniquity and a contradiction.

In a war of ideas, it is people who get killed.

Society highly values its normal man. It educates children to lose themselves and to become absurd, and thus be normal. Normal men have killed perhaps 100,000,000 of their fellow normal men in the last fifty years.

Men are willing to be dead if they can only be dead in a pile.

We used to wonder where war lived, what it was that made it so vile. And now we realize that we know where it lives, that it is inside ourselves.

Peace is the ego’s greatest enemy because, according to the ego’s interpretation of reality, war is the guarantee of its survival. The ego becomes strong in strife.

Very few people chose war. They chose selfishness and the result was war. Each of us, individually and nationally, must choose: total love or total war.

A rabbi — who lived and preached a life of virtue while his congregation ignored him and went on with their selfish ways — was asked, “Rabbi, why do you bother? Nobody listens. You’re not changing anything.” And the rabbi replied, “But you misunderstand. I don’t do it to change them. I do it to keep them from changing me.”

Nonviolence means avoiding not only external physical violence but also internal violence of spirit. You not only refuse to shoot a man, but you refuse to hate him.

I wondered why somebody didn’t do something for peace. Then I realized that I am somebody.

True patriotism hates injustice in its own land more than anywhere else.

The nonviolent revolution begins in your mind. You must first redefine yourself. When people redefine themselves, slavery is dead. Then the power structure makes a motion, but doesn’t get a second.

Violence does not and cannot exist by itself; it is invariably intertwined with the lie.

When I pray for peace I pray for the following miracle: that God move all men to pray and do penance and recognize each one his own great guilt.

I had seen nothing sacred, and the things that were glorious had no glory and the sacrifices were like the stockyards at Chicago if nothing was done with the meat except to bury it. . . . Abstract words such as glory, honor, courage, or hallow were obscene.

Ernest Hemingway, A Farewell to Arms

. . . this sadness
of never understanding ourselves
and of threatening ourselves with
death. . . . 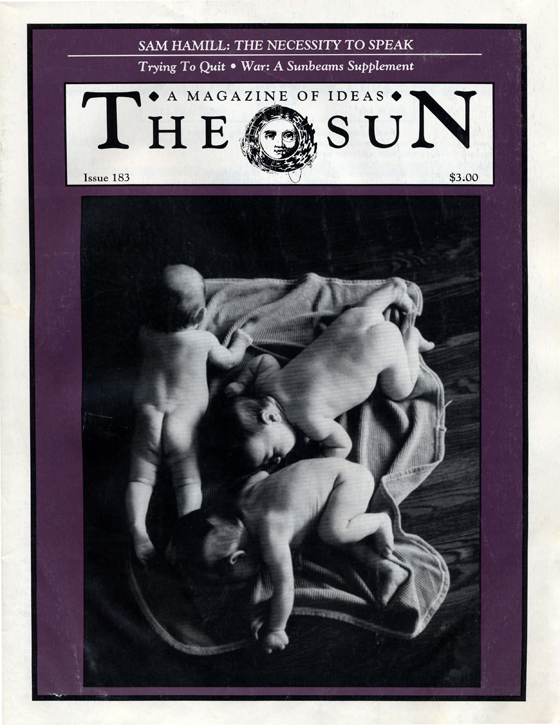