For him, too, World War I proved a shattering experience. The grim facts of war destroyed much of his liking for speculative philosophy, in which everything seems so harmoniously ordered. Man, man, and again man he now put before all phantoms of thought.

The function of the state is twofold and contradictory: it keeps peace and unleashes war. This ambiguity is in us as human beings. Individuals, groups, classes, nations, and governments, all of them, all of us, are doomed to divergence, dispute, dissension; we are also doomed to dialogue and adaptation.

There is always an easy solution to every human problem — neat, plausible, and wrong.

Seek simplicity, and distrust it.

The world is not a prison house. It is a spiritual kindergarten in which billions of bewildered children are trying to spell God with the wrong blocks.

If there is a sin against life, it consists perhaps not so much in despairing of life as in hoping for another life and in eluding the implacable grandeur of this life.

Frank Baum, The Wizard of Oz

It was marvelous working for Pauli. You could ask him anything. There was no worry that he would think a particular question was stupid, since he thought all questions were stupid.

The universe was a vast machine yesterday; it is a hologram today. Who knows what intellectual rattle we’ll be shaking tomorrow.

Existence is a strange bargain. Life owes us little; we owe it everything. The only true happiness comes from squandering ourselves for a purpose.

If the only prayer you say in your entire life is “Thank you,” that would suffice.

When a man learns that just as he broods over himself so does God yearn for him and look for him, he is at the beginning of a higher level of consciousness. From this moment he can begin to follow the guiding strings that are leading him, usually with enormous toil and labor, toward the focal point of himself. For in truth it is not one question with two sides but a meeting place of two questions, that of man seeking himself and of God seeking man. Together they approach a solution to the problem of man’s existence. And in the search for this solution, within this desperate exploration, this going after God, a man will rediscover himself as well as the definition of his own particular being.

Knowing you are alive is feeling the planet buck under you, rear, kick and try to throw you; you hang on to the ring. It is riding the planet like a log downstream, whooping. Or, conversely, you step aside from the dreaming fast loud routine and feel time as a stillness about you, and hear the silent air asking in so thin a voice: have you noticed yet that you will die? Do you remember, remember, remember? Then you feel your life as a weekend, a weekend you cannot extend, a weekend in the country.

We must blow on the coals of the heart.

He found an enormous old umbrella in the trunk. The bright satin material had been eaten away by moths.“Look what’s left of our circus clown’s umbrella,” said the Colonel with one of his old phrases. Above his head, a mysterious system of little metal rods opened. “The only thing it’s good for now is to count the stars.” 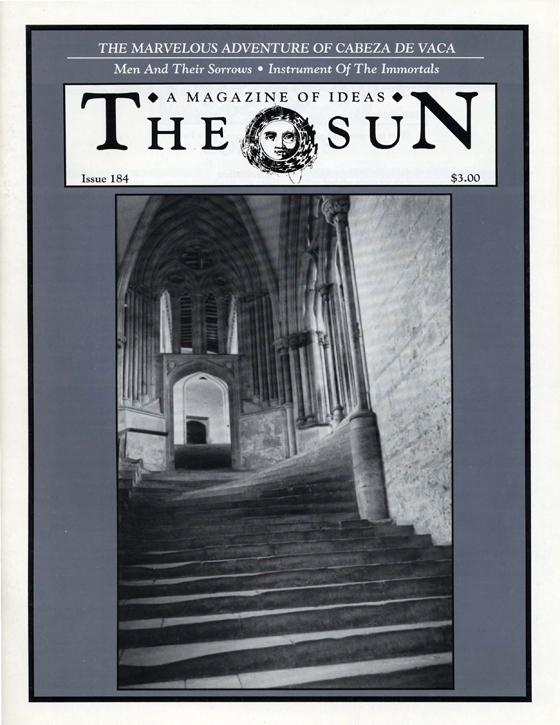 By Nicholas A. Patricca
Poetry