Confessions Of A Catholic Girl

I attended Blessed Sacrament School in downtown Hollywood, on Sunset Boulevard. It is just a block from Grauman’s Chinese Theatre, where my father worked the searchlights for movie premieres. The Chinese Theatre seemed no less fantastic than the Gothic-style church. In my childhood, they were both holy places, sacred palaces of mystery.

Outside Grauman’s the stars left their footprints on the sidewalk. Sister Mary Agnes kept the relics of a saint in a tiny glass box that rested at the bottom of her deep pocket. Father Crow turned bread into God and held the wafers above his head in a golden chalice. Footprints, bones, and bread. The alchemy of bells. My childhood was filled with angels, saints, gods, and stars.

When I was seven years old, my Uncle Dave told me I looked just like Marilyn Monroe. There was reverence in his voice and it echoed through me like some kind of prayer, a sudden grace. In those Hollywood days Marilyn’s name always evoked the mystery, but Mary was the deity that reigned over my childhood pantheon. I can remember sitting cross-legged on my bed sorting through my stack of holy cards, deciding who among the lesser gods would be admitted and who would not. For the most part, it was an easy job. I kept all angels, dragon-slayers, anyone wearing a pretty gown, all the beautiful and all the young; I excluded all the martyrs, anyone eaten by a lion or tortured or crucified. Jesus, of course, was a problem: sometimes in, sometimes out. And the popes gave me difficulties. They often had the best outfits with their golden staffs and domed crowns; however, I excluded them if their expressions were too grim.

But it was Mary who ruled the pack, no question about that. She had a veil as blue and as wide and as open as heaven. She stood on the crescent moon. She crushed the head of the serpent with her bare foot. She wore a crown of stars. She was a star. She was as beautiful as Marilyn Monroe. And full of grace.

Sister Mary Agnes explained what this meant. Unlike the rest of us, Mary was born without original sin. Sister said we could picture our souls like triangles with a little black smudge on each one. Then Sister passed out triangles of art board and we gave each a dutiful smudge with our black crayons. This was a sad business. I remember feeling a grudge toward Eve, a resentment that rapidly took the shape of denial. I was unwilling to believe that my soul had any black mark on it, ever. I was like Mary that way, immaculately conceived.

Next, Sister passed round a bowl of glitter. I wonder what Sister saw in our upturned faces. Hope? Anxiety? Desire for baptism by glitter? The glitter was meant to represent the grace of the redeemer. And we were meant to cover our smudges with Elmer’s glue, sprinkle God’s glitter over our little cardboard souls, tie each one to a string, and hang them from the Christmas tree.

Christmas. The Santa Claus Lane parade marched down Hollywood Boulevard. A beautiful movie star in a sequined gown waved to me. Her dress glowed like the sun, shined with the glitter of grace. Holy Mary, Mother of God. I heard the jingle of bells. Here came Saint Nick riding his magic sleigh. The church filled with red poinsettias and candlelight. High Mass. There was singing. I heard the bells. The baby Jesus was born in the bread, raised in the golden cup above the priest’s head. Epiphany! Suddenly it all came clear to me. It all made sense. The Queen of Heaven had chosen me. I was being inducted into the mystery!

My childhood nights filled with stars as I waited by my bedroom window for the archangel to appear and announce that I had conceived by the Holy Ghost. I did not know what the words meant. They were magical, like the Latin enchantments we said during Mass. But I knew there was a little baby Jesus growing inside of me. It was a delicious feeling. I lay in bed and puffed my tummy out. I thought about how surprised my parents would be. I thought about how they would worship me.

When I made my first Holy Communion, I was dressed like a miniature bride. There was no groom but I had a baby Jesus growing inside, and I had my boyfriend, Francisco. He would be my good Joe. We were seven years old. The Church believed we had reached the age of reason. I believed that when the priest placed the first holy wafer on my tongue, if I didn’t swallow it, if I could keep it from melting in my mouth, then when I stepped outside the church I would rise into the sky.

In the spring I was chosen to crown the Virgin Mary during the May ceremonies. I was given a wire-mesh crown to take home and fill with fresh flowers. Even though I had my secret covenant with the Queen, I was amazed that the sisters had chosen me. I was a known troublemaker. They sent notes home to my mother. She told me Sister was going to change my seat again unless I stopped bothering my neighbors. At recess, I left my area and sneaked over to the boys’ side of the playground. I played sockball with Francisco. This transgression was always ignored. Looking back, I wonder at that, and I see how full of grace was Sister’s bowl of glitter, and how dearly I was loved.

So I was the one who stood on the balcony. The schoolchildren in neat rows on the playground below chanted their Ave Marias. I climbed the ladder that leaned against the statue of Our Lady. Sister handed me the crown of flowers. I placed them on the Blessed Virgin’s head. The children sang. I waved to them. Francisco waved back. The ways of the goddess were charming. Sister Mary Agnes gave me a bracelet made of rosary beads to commemorate the day. I remember. I remember.

Later, I left the Church when I found out what Catholics actually believe. At seventeen I became an atheist, an intellectual. I studied philosophy. It was easy to become an atheist then, when there was only one God left not to believe in, and not a very pleasant God, at that. He was a jealous and foul-tempered deity who, according to the Church’s teaching, came up with an outrageous and masochistic plan to redeem the planet. The road to my atheism was paved with Church doctrine. While I disbelieved what was then the only God left to me, the other gods of my childhood awaited my return. Eventually, I did. A sudden grace and I was back in the church of my holy childhood: footprints, bones, and bread led me back to the saints and the stars and the goddess.

I still look for the sacred in the profane. And I am still a troublemaker. And the Queen of heaven’s message still sounds as right as rain. Give birth to the god within you — that is the message that beats at the center of her sacred heart. She says I can be her messenger, her divine comedienne. So I write of a time yet to be when my sisters and I lie like lilies in a field and spread our legs to tempt the Elohim — those sons of heaven who slept with the daughters of man, and created the race of giants that Yahweh destroyed in the flood. Come down on us, my sisters beg, and we will make a race of heroes. And should the Old Yahoo make his jealous noises and threaten to drown us once again, we’ll be ready for him. We have hidden arks in the sides of the mountains. We will cradle our avatars across whatever rough seas he may raise. And when we reach the shore of the New Jerusalem, we will set our fresh gods upon the land. They will make peace on earth. We will make revolution in the heavens. 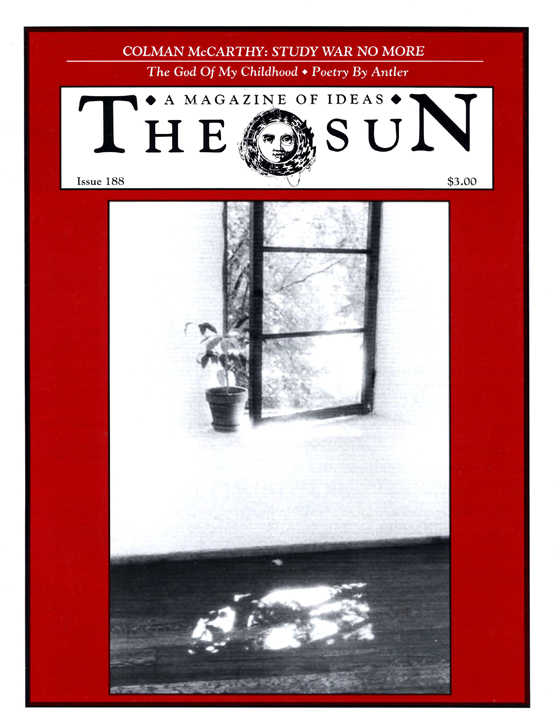 In My Father’s Arms

The God Of My Childhood