Marvin had been watching the car, a red Ford Escort, drive by his house for perhaps twenty minutes. It was driven by a young fellow, probably one of the local college students. There was a small dent in the rear fender on the driver’s side. Marvin took note of the car on about its fourth trip down the block. After that, he kept count while concentrating on the task at hand, which was trimming back his many rosebushes for winter. November was just around the corner and though Marvin knew two or three of the bushes might still give him some blooms, he had nothing better to do than to snip and trim.

The driver was dark-haired and wore sunglasses — the plastic kind in fluorescent green. He slowed every time he passed the silver Mazda sports car parked along the curb across from Marvin’s house. Marvin recalled seeing a young woman, probably another of the local college students, get out of the car the day before. Marvin figured she was baby-sitting for the Mitchells, who lived across the street with their twin boys, toddlers who made more noise than a power mower at eight on a Sunday morning.

“I’m taking Lydia home now,” his wife said as she walked down the front steps, their four-year-old granddaughter skipping along behind her.

“Bye, pumpkin,” Marvin said, not sorry to see her go. He’d spent what felt like an hour that morning sharpening crayons for Lydia: forest green, magenta, lemon yellow, red, red-orange, orange-red. It was hard work; he had arthritis in his fingers. Marvin had never seen so many crayons. Many more than the box of sixty-four he remembered their son Richard having as a kid. Marvin recalled a phase in his son’s life where Richard colored everything either black or turquoise. He’d worn the crayons to small chunks.

“Don’t press so hard next time,” Marvin told Lydia, his wrist sore from turning Crayolas round and round.

The Ford Escort moved slowly down the block as Marvin’s wife drove off in the Plymouth, Lydia’s head bobbing as she talked.

By the eighth or ninth time the Escort eased itself past the silver sports car, Marvin had a theory: the young woman was the fellow’s lover; she’d just ditched him for her psychology professor, a man given to short-term flings with his students. The young man had no idea, of course, that this was the reason his girlfriend had told him quietly and calmly at the frat party that she needed some time apart, that her schoolwork was slipping (hadn’t she gotten a B– on that child development exam?), and that they’d been too entangled with one another. A break would be good for them.

Marvin shoveled mulch onto the perennial beds and raked it smooth. He swatted at his arm: a mosquito called out of hiding on this Indian summer afternoon. It amazed Marvin how insects could survive untold catastrophes. He’d watched a program with Lydia where scientists froze a scorpion in a block of ice, and when they thawed the ice weeks later, the scorpion lifted its terrible tail into the air.

Marvin looked over at the Mitchells’ brick house. Was the girlfriend inside, watching the red car through a slit in the blinds? The house looked quiet, almost sleepy, in the afternoon sun.

Marvin went inside his house and made himself a wine cooler with his wife’s chardonnay and some flat soda water. He went back out to the front yard in time to see the driver get out of the red car and stand in front of the silver car, eyeing the headlights, then walking around the side and looking through the window on the passenger side. The young man was wearing Bermuda shorts in bright fuchsia. He was on the scrawny side, Marvin thought; a little weight lifting would do him good. The fellow looked up just then and Marvin bent down quickly to pick up his garden gloves. He moved casually up to the front porch and took a long drink from his wine cooler. The fellow across the street lit a cigarette and got back in his car. He sat there for a few minutes, the engine idling. The sports car gleamed in the bright sunlight like a bullet.

Marvin thought of his son. Would Richard have brooded like this over a girl? Would he have driven his beat-up brown sedan around and around a suburban block? Richard had gone to college in another state. He met Christine in Mexico over spring break of his senior year. They got pregnant and married before graduation. But that was a long time ago.

The red car crept around the corner once again. Marvin felt a burst of irritation. What the hell was with this kid, orbiting the block like some satellite?

Marvin went back into the kitchen and made another drink, adding gin to the remainder of the flat soda water. It tasted awful but Marvin drank it down in a few swigs. He opened a lawn chair on the front porch and sat holding his empty glass. His wife pulled into the driveway. When she got out of the car Marvin saw how tired she was, how her tweed coat seemed to weigh her down.

“I don’t think Lydia realizes he’s never coming home,” his wife said, walking onto the porch. “I still think we should have taken her to the funeral. It would have completed things.” She stood there for a moment. “Is that young man lost?” she asked, shading her eyes as she looked across the street. Marvin shrugged. His wife sighed and went inside.

Marvin lost count of the number of times the Ford had driven slowly down the street. Maybe it was thirty times. The sun was beginning to fall beneath the trees and Marvin found himself wondering, as he did as a child, how the sun could make such a show of setting, but do it silently. All that flaming red and gold and spears of light shooting from beneath the clouds. Marvin began to hum an overture, something he’d heard on the classical station that morning.

The young man got out of the car again and placed a piece of paper under one of the Mazda’s windshield wipers. Marvin decided the note said that if she called the fellow within twenty-four hours, they could repair the mess they’d made of their relationship. Or maybe it was meaner than that, maybe the fellow had some balls after all and told her he knew what she was up to and that it was over, that’s it, don’t bother to call.

The young man got back into his car, turned on the headlights, revved the engine for a few seconds, and then drove off, fast, as if he finally had somewhere else to go.

Marvin sat on the porch in the twilight. He felt the evening chill begin its steady crawl into his bones. Eventually he got up, the warm lights of the kitchen drawing him in, where there would be supper, and the radio, or some other small comfort. 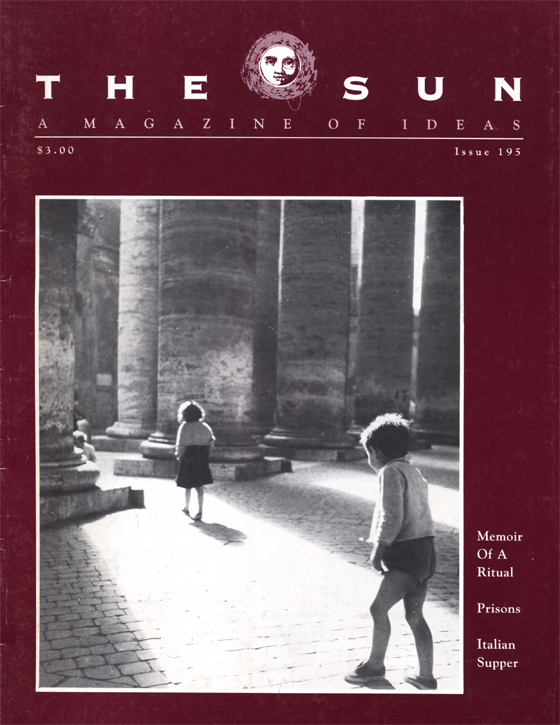