The Ward | By Bruce Mitchell | Issue 196 | The Sun Magazine
close

L ’Hôpital de Caen was an ancient building riddled with bullet holes from the Second World War and covered with eighty-six years of pigeon droppings. The hospital ward reflected this history, for it was mostly filled with wounded men who had long been forgotten, statues to sacrifice or chance or poor judgment. The man next to my bed, a Monsieur Girard, had a severed spine from an American bomb dropped to liberate Normandy. He never mentioned the war or expressed any bitterness over being in a bed since 1945. Girard, like the other long-term residents of the ward, did not care about how he got there. The only thing that really mattered was the ward itself, the routine.

Each day began with the entrance of the nurse, Madame Charoing, at exactly six, turning on the lights with a quiet, but determined, “Bonjour messieurs,” which meant, “All right, gentlemen, it is time to get those bowels moving. Those of you who are immobile have ten minutes before I return to collect the bedpans and urinals. If they are not full, they will not be collected until the next shift, which means they will sit, stinking up the ward, until four.” None of us wanted to compromise the hygiene of the ward, so there was immediate action. Each man, tested by the degree of his immobility, pulled the bedpan or goose-shaped urinal from under his bed, pushed it into its proper position, contorted himself into an often bizarre position, and looking straight ahead, strained to do his best. For many, this was the most demanding time of the day, for it often required monumental individual and communal effort. No matter what the disability, it was expected that each man perform. Monsieur Girard was lifted by two other patients and held as the pan was placed under him. I, who had a broken leg from a rugby match, was in traction and had to do a reverse push-up, arching my back, arms wrenched backward. We all had ten minutes.

After the ward’s waste was collected by two subalterns, a peacefulness settled over the room. Everyone had done his job and now we could wait until the smells of success dissipated and breakfast was served — output insuring input. Breakfast was each man’s reward and was savored, the victors slowly putting just the right amount of jam on a croissant or sipping just the perfect quantity of café au lait so that croissant and café would be finished at the same moment. There was very little talk during this time, each man’s enjoyment honored and respected.

Once the breakfast trays had been collected, the community was enlivened by the arrival of the newspapers. We all read, commented, even argued across the ward as papers rustled and seemed to speak — blank, crisp, vertical sheets emitting outrage or laughter or disgust. In my second month in the ward, this daily ritual was interrupted by the arrival of another patient, a young man whose entire face, except for the hole that had been his mouth, was covered with bandages. He was carefully placed on the bed and left, quietly moaning, obviously in great pain. To my surprise, the papers continued to crackle and banter, without notice.

Lunch was served and as usual we ate slowly, appreciating any little surprise in the menu and often continuing commentary on issues raised in the morning papers. Lunch was a pulling back in the day, a time to savor how well the morning had gone, to slow everything so that a nap just sort of happened as a natural extension of well-being. Even the moans and muted crying of the young man (who, we had learned, had been in a motorcycle accident), did not change this well-rehearsed process. He was ignored, his agony merely an unpleasant background, until it began to interfere with the afternoon nap.

It was understood, but never stated, that conversations would diminish, that sharp noises would cease to exist, and that we would doze off without notice, one by one. Even I, half the age of most of the men, began to like this part of the day, letting my body find the most comfortable position possible (this itself a challenge), emptying myself into the sounds of a distant lawn mower on the hospital grounds or the nurses’ muted talking far down the hall. Even if one did not sleep, it was to be a time of quiet. The young man, blind and in excruciating pain, could not have known that he was inadvertently making enemies, that with every cry or violent inhalation, he was interrupting the established flow of the ward’s routine.

On the third day of his terrible recuperation, a small contingency of the ward’s older men circled his bed to have a talk with him. His bed was across the room from mine, and I could only catch the gist, which was hard and unforgiving — they understood his pain, but he must bear it without disturbing the others. Incredibly, he responded with silence. Even in the wrenching horror of his own, now eternal darkness, he sought to be accepted, to reach beyond his own suffering. He held out until that night.

The lights went out at exactly eleven, and for half an hour, the room was completely black. At eleven-thirty, the first match flared, illuminating a face with a cigarette, then another and another. It was against hospital rules to smoke, but in the ward’s case, the rule was ignored if broken discreetly at night. The butts were always carefully extinguished, wrapped in toilet paper, and put into the bedpans for the morning pickup. For me, it was a wonderfully introspective time, smoking my meerschaum pipe, reflecting over my life and possible future, watching the orange, breathing fireflies of light, enjoying the communal darkness.

The first noise was hardly audible, like the whimper of a child so hurt that the wounds had to speak, a primal crying that went far deeper than language. The hurt had lost all anger and selfishness; it spoke only of its existence, incapable of any control, gurgling its rawness. The Galoise cigarettes continued to glow and the animal wound continued to bleed as a tension began to develop between the ward and the pain. No one rang for a nurse, who could have been induced to give yet another morphine injection, that magic balm that lifted one out of the body, beyond the screams. Somehow we knew that these profound whimpers were not asking for a placating flow of drugs, but that the hurt itself was asking that it cease to exist.

One by one, the orange tips of light began to disappear and the ward began to move, softly, inexorably, toward the boy. Monsieur Girard was carried, with difficulty and perhaps even at great risk, to a bed vacated for him, next to the boy. The same two “porters” removed me from my traction and carried me to an empty chair, placing me at the foot of his bed. The entire ward, eighteen men in various contortions, surrounded the blind, softly crying young man and began to touch him, tentatively, gently, wherever we could, feet, hands, legs, arms, shoulders, delicately massaging the torn face through the bandages. No words were spoken, but we each, through our hands, tried to talk to the pain, to tell it that it was not alone, that we understood, that we felt it. Each hand spoke from its own experience, some firm and steady, some fluctuating between compassion and resolve, some light and afraid.

Our identities and feelings must have become well-known to the young man, for he became part of our routine. He knew that each night the first acrid smells of a Galoise signaled that one of us would sit with him, hold him. The nurses never knew of this secret therapy and when I was finally released, I knew that the young fellow would survive, that his darkness had become part of the ward’s, attending to itself.

Bruce Mitchell’s “The Ward” [Issue 196] is the most moving thing I have read in years.

One grows immune to descriptions of harrowing conditions. You get into what I call the “Yes, yes, Mrs. Lincoln, but how was the rest of the play?” feeling. In reading “The Ward,” I was struck by how well written it was and how little I cared; I don’t have the energy to care about everything. Yet when I got to the last paragraph, I cried. A beautiful, uplifting story.

Joy Calhoun Glen Ellyn, Illinois
More Letters
What Do You Think? We love getting letters to the editor for our Correspondence section.
Has something we published moved you? Fired you up? Did we miss the mark?
Send A Letter 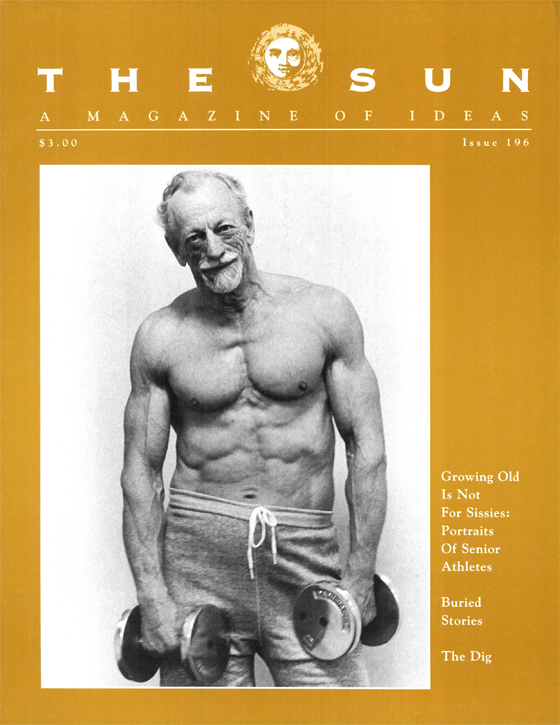 With You Lying There On The Other Side Of The Bed