When The Bough Breaks

On our way to the rally, I glance at my daughters. It’s hard to imagine one of them pregnant, but I have a keen imagination. I picture her starting to tell me, or being too ashamed. Lying awake that night, or crying herself to sleep.

Apparently, I have a better imagination than George Bush or Ronald Reagan, also family men, who have packed the Supreme Court with enough zealots to set back the clock this summer, make abortion risky business once again. Roe v. Wade, which guarantees women the right to an abortion, is about to be overturned, or turned into a joke — as surely as young girls keep giving their hearts to the wrong boys, or the right boys at the wrong time; as surely as no one in the Bush family will ever have to worry about an unwanted pregnancy, no matter what the Supreme Court says. For the affluent, the powerful, abortion will always be available. Like champagne and caviar at three in the morning. Like an understanding doctor, ushered in the side door. Of course, sir. In the strictest confidence, sir.

I respect those who oppose abortion because of deeply held religious beliefs, who passionately revere all life, who feel morally obliged to speak out on behalf of the unborn. But George Bush isn’t a moral man. Clarence Thomas is no freedom fighter. Motivated by political expediency, uncomfortable with the habits of a democracy, the ruling elite wants to rewrite history. Once a supporter of abortion rights, Bush now panders to fanatics who fear sex more than death; who see AIDS as a godsend; who believe that rape and sexual bullying — not to mention carelessness and impulsiveness and plain old human stupidity — are always going to be somebody else’s problem.

Their message is simple: they’ve had it with the sexual revolution, with reproductive freedom, with women who think they’re as important as men. These are people who would condemn those women to bloody deaths in back alleys rather than face the horny demon in themselves. Until recently, they were willing to incinerate millions of Russians (and their unborn fetuses) because they thought a failing communist empire had less of a right to life than a failing capitalist one. Weakening Roe v. Wade is as important to them as winning the Cold War, and they’re on a roll. It may be impossible to stop them. Still, on the first Sunday in April, hundreds of thousands of people try.

It’s a huge crowd, perhaps the largest ever to march on Washington. Police estimate five hundred thousand; organizers say a million. They jam the streets, the sidewalks, the subways. Many are dressed in white, the color favored by suffragists. Most of the women are under thirty, but there are plenty of mothers and youthful-looking grandmothers with graying hair and generous, sexy, exuberant smiles: women who know their power; pro life, you might say. A few wear huge foam-rubber hats in the shape of lips, and carry signs that proclaim, “Read Our Lips.” There are old-guard feminists, seasoned by years of struggle, side by side with kids to whom history is a boring hour between lunch and math. There are lots of men, too, more than I expected: I wonder how many of us are here because our wives are. Because our daughters are demonstrating for the first time. Because they were going with or without us. Because sleeping late on Sunday makes the wrong kind of statement when the women you love are marching in the streets.

We’re too far from the stage to see any of the speakers. We can’t even see the stage. That’s the peril of attending a demonstration instead of getting the bird’s-eye view on television: the earth from space. We stare instead at the loudspeakers, placed like buoys in a roiling human sea.

One activist calls women “the poorest of the poor.” Actually, there seem to be few really poor people in the predominantly white, middle-class crowd. This is ironic, since publicly funded abortion centers have been most affected by recent restrictions. But it takes money to get here from the ghettos of New York or Detroit. It takes believing in the government that claims to represent you.

I remind myself that democracy is tempestuous; that this is a call to arms, not a one-on-one conversation. Gazing at the Washington Monument, I remember that the founding fathers were an irascible lot, too. So what if the speeches are strident? Even the pulsing beat of a stupid song can make you get up and dance. To stand and be counted is what matters. Choice is what matters.

Still, I can’t help being put off by the pictures of Chief Justice William Rehnquist with the caption, “Gag Me With A Hanger.” Maybe it’s because I’m a man, and will never know what it’s like to be pregnant. Or maybe it’s because few of the speakers address the moral ambiguities, or acknowledge that abortion isn’t just another surgical procedure. It’s hard to cheer for the right to end a life.

The march to the Capitol lawn is scheduled for noon, but it takes another two hours for everyone to start moving. This is an army: bigger than the one we sent to the Gulf War; bigger than the population of Boston, or Seattle, or New Orleans. (Not nearly so big as the number of abortions that are performed in the U.S. each year: one and a half million.) Jammed against each other, barely able to move, we inch toward Pennsylvania Avenue, which is already filled with marchers. Behind us, people keep pressing forward. This, I say, is how sperm must feel. N. doesn’t laugh.

When we finally reach the street, it’s like moving into the current of a mighty river. We pass the White House, the Treasury, the Justice Department, all the cornerstones of empire that remind us this is Washington, where decisions are made that affect everyone, the way one careless moment, one broken promise — one broken condom — can affect your whole life.

“What do we want?” one woman calls. “Choice,” the marchers answer. “When do we want it?” she bellows. “Now,” thunders the crowd.

There are several shouting matches with small groups of pro-life demonstrators, who had set up a mock graveyard near the rallying site: two thousand tiny white crosses representing aborted fetuses. Now they hold aloft signs or cry “shame” at the marchers.

The confrontations are inevitable, both sides needing each other. As N. observes, the pro-choice demonstrators express the anger, the pro-life demonstrators the grief. This is one reason the issue is so divisive. When pro-choice supporters talk only of choice but not of abortion, when they champion individual liberty but ignore the messy question of whether or not abortion is killing, they invite this kind of response.

Expressing ambivalence about abortion may seem politically naive. Why give an inch to those who insist the rights of the fetus outweigh those of the mother, or who luridly picture the fetus as a sleeping infant — as if all it lacked were booties? Still, those who talk of the earth as a living organism, who trouble themselves about rain forests and animal rights, can’t deny that the fetus is alive.

Are we speaking different languages? Is there a way the two sides can come together in greater compassion? Can we agree that abortion may be killing, but that we kill all the time, we kill to survive? Can we say yes to life but no to a fetus? Can we be against abortion and for choice?

Such questions don’t win elections or make great headlines. But we don’t live by headlines. After the newspaper is tossed aside, the talk and the worrying go on into the night. This mysterious journey that starts in mystery — who understands it? We don’t understand why we’re here or, leaving, where we go. We bring children into this world, but are they ours? Is the fetus ours? We don’t know whether our own lives belong to us, or to God. Or why, if there is a God, so many lives end in ruin, so many dreams die in utero.

Thank you for being brave enough to talk about the ambiguities of abortion [“When the Bough Breaks,” Issue 198]. Your thoughtful and honest commentary strikes a rare chord that is usually drowned out by the shouts of both sides.

Mary Julia Street Ambler, Pennsylvania
More Letters
What Do You Think? We love getting letters to the editor for our Correspondence section.
Has something we published moved you? Fired you up? Did we miss the mark?
Send A Letter 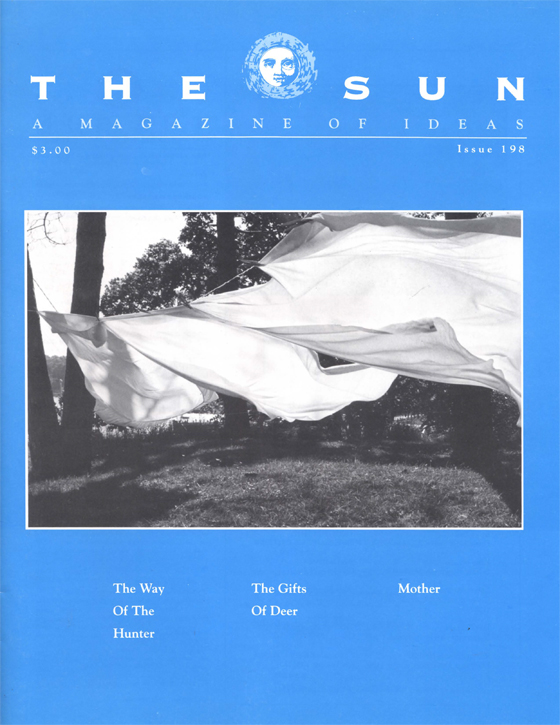 Somewhere Along The Line

The Gifts Of Deer