Yesterday after breakfast they drove over the barren mountain to the very tip of the cape. The photo he snapped of her there would show a lighthouse in the background, tall and white against an implausibly blue sky. On the way back, from a spot where the road pitched and curved, he glimpsed a cove far below. The climb down would be difficult but with the beaches in the village so crowded, the inlet’s seclusion beckoned. Yet she’d been counting on a visit to the museum that day, and it was open only during the morning, so they drove back to the village instead.

This morning the cove is his alone. He left her at the steps of the church, under the gold clock with no hands, drove back across the mountain on the rutted road, and clambered down the cliff with a knapsack containing bread, tomatoes, wine, a towel, and a book — all he’d need for a day.

Solitude seems possible; the sea and sky are wedged into the cove by two walls of volcanic rock. The horizon is broken only by an occasional sail. The cliff’s sheerness would discourage most from making the descent.

He crawls off a ledge and, leaning against the rocks behind him, careful to step clear of the black-spined urchins rooted in the moss, finds a toehold on submerged stone. The water is deep and clear and there isn’t much wind. He dives flat, bracing for the cold smack of the surface, and then swims hard, suspended in the water as if in a void. He reaches the middle of the cove and turns to tread water, noting with satisfaction that the nearest side, to the east, is still in shadow. He swims back and forth across the cove before returning to the ledge — to the book, food, and wine, and finally to a nap in the warm sunlight.

Now and then some debris floats in from the open sea — bits and pieces of decaying matter, impossible to identify — but it all drifts out of sight. The wind picks up slightly, a cloud crosses in front of the sun, and there is a momentary chill, as there was last night on the hotel balcony when the sea loomed dark before him and all he could feel was the breeze across his damp chest. The cloud passes and the warm sunlight returns.

When he wakes up, a yacht is moored fifty yards away, gleaming white in the sun. He considers pulling on his shorts, though there’s no sign of people aboard the yacht. Just as he’s about to turn away, a man emerges from below deck with a silver air tank strapped on his back and a diving mask across his forehead. He brings the breathing apparatus to his mouth, tests the tanks with a moan, then rolls backward over the side, flippers upright as they follow him in. Bubbles rise to the surface, and then a woman steps out of the cabin wearing nothing but a pair of red sunglasses. She makes her way onto the foredeck, sets down a towel and a large radio, and begins to coat herself with suntan lotion. Soon she glistens from head to toe. Her breasts and behind are as brown as the rest of her, with only the triangle between her legs offering a contrast. Now she reclines on the towel and turns on the radio. Static bounces around the cove until she tunes in a popular-music station. The song he hears has an outdated beat. The lyrics are in English, but all he can make out is the repeated refrain, “You say you need me, but I say you don’t.” When the song ends, a voice comes on in Catalán. In heavily accented English, it pronounces the name Kid Creole and the Coconuts. Then there’s more of the same music.

Reading is difficult now, so he returns to the water, swimming out farther this time and then, tiring, he heads for the far side of the cove and climbs onto a rock. The yacht is far off now, and he lies back on the stone, letting its sun-baked warmth embrace him. But the music is inescapable, and after a few moments he’s back in the water, heading straight for the boat. He stops within thirty yards of it, but decides to swim closer, approaching slowly, head up, using a breast stroke. She hasn’t moved; she can’t hear his splashing over the music. He doesn’t want to startle her by shouting. But as he moves closer, he begins to worry about her reaction, about what she may think his approach insinuates. He wonders whether he’ll be able to make himself understood with his meager Spanish. And what if the diver should return and misread the situation?

He feels a cold current below and sees himself on the hotel balcony again. How long did he stand there before she called him back to bed? She’d forgiven him his latest “adventure,” as she put it, but he couldn’t forget it. Memories of the other woman had gotten in the way of lovemaking, stopping him again, numbing him, turning him cold.

The woman on the yacht hasn’t moved. She lies on the foredeck, facing the sun, a foot tapping in time to Kid Creole. He calls out, “Perdóneme, señora.” But there’s no reaction. He says it again, louder. This time her head rises with a jolt and she turns in his direction. Her breasts swing, nipples copper from the sun. He focuses on her sunglasses, hoping she’ll remove them.

“La música,” he says. She says something he cannot make out. The glasses remain. A distinct frown has formed below them.

She shrugs, cups a hand under an ear. Rather than repeat the phrase again, he swims the rest of the way to the boat. She is leaning over the rail and looking down at him, the towel wrapped around as much as it can cover. But her frown is gone, replaced by a smile he finds perilous. Christ, he thinks, just turn down the damn music. “La música,” he insists. “La radio.”

“Ah,” she replies. The smile remains, resting upon him.

For the first time today, he’s conscious of his own nudity. The woman on the boat can’t see much, not with all but his head submerged. “Por favor,” he says, “ponga la radio menos fuerte.” She nods slowly but doesn’t move away from the rail. Instead she lets the towel fall away, brings her hands to her hips and rolls them slightly. The sunlight, mirrored off the water, flickers across her shining skin. He can see his face in each lens of her sunglasses, as if shrunken and stamped on a pair of bright red coins, while his member swells and bobs below the water’s surface. He tries to remember the other woman’s eyes, those of the woman he’s been forgiven, but they’re gone. Instead he remembers last night’s conversation.

“What kind of question is that?”

“Seriously, I want to know.”

“We can’t afford to start a family just now.”

“What’s that supposed to mean?”

“You know exactly what it means.”

“Then it’s time you found out.”

His erection subsides. The woman before him raises her head and looks beyond him toward the open sea. “Gracias,” he says, turning to swim away. He returns to his ledge and puts on his shorts. The cove is quiet again. On the foredeck of the yacht, the woman has resumed her position. Her nakedness is more resplendent now, heightened as much by the distance as by the silence. He takes up his book, but the words seem to float off the page. He lies back in the sun only to stare at her until his eyes close.

When he awakens again, the yacht is gone, the cove all his once more. But the sun is near the western wall now, its shadow about to reach him. He takes one last swim, then returns, packs his things, and begins the climb back to the car. From the clifftop, he looks out to open sea. The white boat, the only one in sight, is heading for the tip of the cape. He wonders if it will be moored in the village harbor.

At the hotel, the clerk hands him a message from “la señora” with a look of respectful sadness. The note says that she has gone to Barcelona for a couple of days. He thinks of following her, until he realizes she hasn’t mentioned where she’s staying. A couple of days, he thinks. How many is a couple? After dinner, he sits in a cafe near the harbor, drinking brandy. The night is warm, the wind high. The halyards make the boat masts ring like mad bells. The moon dances on the water. As he watches people stroll past, he spots a woman in red sunglasses. He’s tempted to follow her, but she passes another woman in red sunglasses walking in the opposite direction on the arm of a pale-skinned man. His eyes fix upon her until yet another woman in red sunglasses walks into view. She’s wearing a T-shirt emblazoned with the words Kid Creole. He watches her stop to speak with two other women wearing red sunglasses. Soon, there are women in red sunglasses wherever he looks. 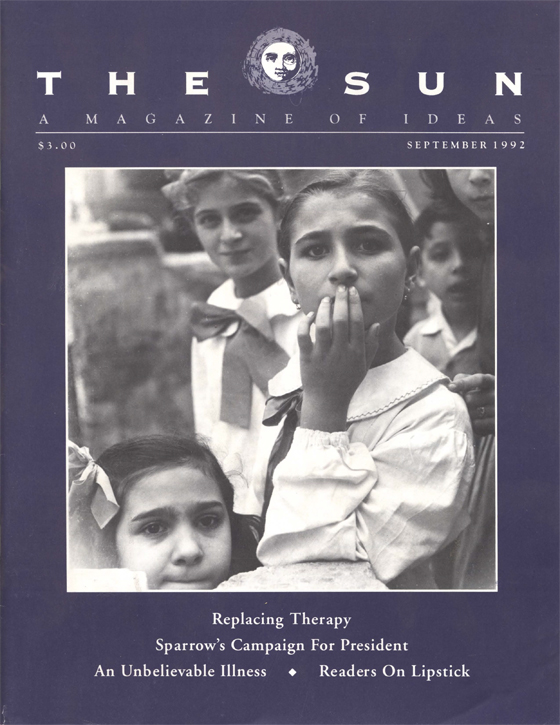 Forever And A Day