Driving home from work, Bones rehearsed what he’d say when he broke up with Linda. “I got to get out,” he might say. Or, “I’m no good for you.”

Bones walked into his sister Marbel’s house. Her briefcase rested on the polished table in the hallway and her overcoat hung from the hall tree. Bones thought she’d seen this on television. Their daddy had never had a briefcase or a topcoat.

He hung up his windbreaker and went to the kitchen.

Marbel was spooning food from a plastic container to a silver dish while watching the news on a small color television.

“So,” Marbel said, “you and Linda going out tonight?”

Linda lived next door and Marbel was proud she had introduced them.

“Naw,” Bones mumbled, getting a beer and sitting at the breakfast bar.

“What is that supposed to mean?” Marbel towered over him in her gray suit and black high heels, looking more like a model than a business executive.

“I’m breaking up with her tonight.” Bones stood and cleared his throat.

Marbel leaned against the counter and pointed a slotted spoon at him. “I am never introducing you to another woman. You’re just like Daddy. Use what you want, then run away.”

“It’s Linda’s kid,” Bones said. “Linda wants me around every night. No beer. No music. A kid does that to a woman.”

Marbel shook her head and opened another container. The smell of chicken filled the room. Bones thought about his own kid, Homer. Tarmalene had taken Homer away because Bones was always traveling with the band.

“You’re as unreliable and mean as your crazy daddy,” she had shouted.

Bones had spent his first nineteen years training to be like his crazy daddy. He drank beer at late-night bars, smoked home-rolled cigarettes, and played blues on his guitar. But when Tarmalene took Homer away, Bones smashed his guitar on the hood of his pickup. He gave up music and drove a semi. Still, he didn’t get to see Homer.

Bones finished his beer and put the can in the recycling bin. Marbel demanded order. She had presented a list of rules when Bones wanted to stay with her.

“No overnight guests,” she had commanded. “And no borrowing my car.” Marbel held a grudge, just like Mamma. Was it his fault that he had lost one of Marbel’s cars in the lake four or five years ago?

Bones liked to eat standing in the kitchen, with a salt shaker in one hand and a Bud in the other. But Marbel insisted on sit-down dinners, with cloth napkins, silver forks, and talking between bites.

“Have you reconsidered my suggestion to take some college classes in the evenings?” Marbel asked as she passed Bones the chicken.

“I’m offering you a chance to better yourself,” she said. “Do you intend to drift endlessly from job to job and relative to relative?”

Bones leaned a forbidden elbow on the table. “Well, if there’s an opening at the White House, I might consider that.”

He loved her scornful look. She didn’t believe he did anything right.

After dinner, Bones brushed his teeth. He thought about bringing the sports section to Linda’s son Peter, but decided not to.

Outside, the maple on Linda’s lawn rattled in the wind. He imagined telling Linda he was leaving and pictured her hurt look.

He looked around, but didn’t see anyone.

Above him, a flashlight pierced the dark leaves. Peter clung to a top branch and shone the light on Bones.

“What are you doing up there?” Bones asked. Usually he found Peter sprawled in front of the television, reading comics. He hardly recognized him with his blond hair covered by a black knit hat.

“Your mother know you’re up there?”

“Naw. She doesn’t understand. Don’t tell, OK?” He shone the flashlight in Bones’s face until he nodded.

Bones was shaking when he knocked on Linda’s door. He heard rock music and the sound of television laughter.

Linda smiled when she opened the door. Her brown hair was curled, and she wore tight red slacks instead of her usual baggy jeans. She’d put on bright red lipstick and that blue eye shadow that made her eyes so sexy. She looked good.

“I made bread pudding,” she said. His favorite.

“How was your day?” she murmured, sitting across from him.

“The forklift foreman was on my case all day. And my car’s giving me problems again,” Bones said.

Linda nodded sympathetically. She got up to pour more coffee and brushed her hip against his arm. Linda smelled like red wine and rich perfume. Bones wished he had showered and changed clothes. He wondered when Peter would barge in.

Linda talked about the PTA meeting she was missing just to spend time with Bones. He picked at his fingernails. He couldn’t spit out the terrible words he’d carried all day. He finished his dessert and slid his coffee mug from hand to hand.

“What’s wrong with you?” Linda asked.

He cleared his throat. “You’re terrific, you know, but I have no luck with kids. It’s better to break it off now.”

Linda stared at him. Bones fidgeted, then stood up.

She pushed at his chest. “You can’t just walk out. You made a promise to me and my son.”

“OK, sweetie,” Linda called out. She warned Bones, “Keep your voice down.”

He looked at his hands. He hated sitting in a kitchen listening to an angry woman. He’d spent his life quivering under Mamma’s fury, because his daddy wouldn’t sit still for it. He’d spent more time getting hit for his daddy’s meanness than for his own.

“Peter looks at you like a father,” Linda whispered harshly. “There’s no excuse for behaving like this.”

He wished he had his guitar. With music, he could explain how Tarmalene never let him talk to Homer. He didn’t even know what his own son looked like, where he lived, what job he had, if he knew how to play guitar. Homer was a mystery that Tarmalene used to hurt him.

With his guitar, he could pull out the wailing notes to let Linda know how that felt. But words were like chunks of stale bread, too big to swallow.

“Don’t you dare blame this on Peter,” Linda exploded, pounding on his chest. “Too many guys have pulled that one and I’m not taking it anymore.”

Bones grabbed her fists and thought about smacking her good. Instead he shoved her and walked out.

He needed music and beer, and he needed them fast. His car choked, spit, then started. He turned the radio up loud, rolled his windows down, and drove with his doors unlocked through the rough streets that scared Marbel and Linda. The parking lot at the Prospector was full, which meant some of the old boys were jamming.

“What’s going down, Bones? Want to sit in for a set?” A couple of the guys waved him to the stage. One handed him an electric guitar. Bones loved sitting on stage and tuning up. Anything could happen, he thought, as he scanned the audience for a sympathetic face. He had learned long ago that he needed someone to play to. Usually he chose an exotic woman, but tonight, he noticed a young man with slick dark hair, squinty eyes, and fists angry around his beer. He looked like Homer might. What would happen, Bones wondered, if he discovered his son in the audience? Would they hug? Would they just shake hands? Or would Homer turn away?

He smiled at the young man and Homer smiled back. A woman sat down, took Homer’s hands, and kissed him. Homer turned away.

The drummer set the beat. While Bones played, he looked for a beautiful girl. But all he saw was Homer, staring at the woman, treating his father like faded notes on a crumpled page.

He stayed on stage for a while after the set, waiting to see if his son would come talk to him. After one more beer, Bones vowed, he’d go up to Homer. But after he’d drained his Rolling Rock, he couldn’t find his son. Homer’s table held only three empty Coors bottles and a lipstick-stained cigarette butt. Bones felt swallowed by a dark sadness.

He wished he could go to Linda’s to spend the night. He wished she would hold him and say that everything would be OK. But she wouldn’t let him in until he promised to be a part of her life, not just in bed. That’s what it always came to. They wanted promises.

On the way home, Bones imagined finding out where Homer lived and staking out his place. He imagined their first meeting and Homer’s happiness at finally seeing his father. He was so wrapped up in this vision, he barely noticed the light shining on Linda’s driveway. Like a searchlight, the beam swept over his face. He squinted, and saw a shape in the upper branches of Linda’s tree.

“I’m watching for my father,” Peter said. “Mom says he was a big man. I have a picture. He looks like you.” The tree groaned as Peter climbed down. He held the flashlight in his mouth and dropped past the last few branches, landing in front of Bones.

“I’m not your father,” Bones said.

“Yeah, Mom said he would say that. He never admitted to anything, she told me.” Peter stared hard at Bones.

“What do you want from me?” Bones asked.

Peter shrugged, his face pale and scared. Bones thought about touching Peter’s head but decided not to. This strange boy made him nervous.

He put his hands in his pockets and looked at Linda’s house. The television glowed through the thin curtains. “Maybe we’ll play a game of catch sometime.”

“Yeah, sure,” Peter answered. He reached up and grabbed a tree branch. Before Bones could stop him, Peter had disappeared up the tree.

Bones kicked at a rock. He thought about the man in the bar. The skin tone wasn’t right. The hair was too curly.

The branches rattled as Peter settled high above him. It wouldn’t hurt if he acted nice to the kid, played a game of ball, brought over the sports section every once in a while. Bones reached for a branch and gripped the tree with his legs. The bark scratched at him. His hands felt like fire. He wondered how high he could climb without falling. 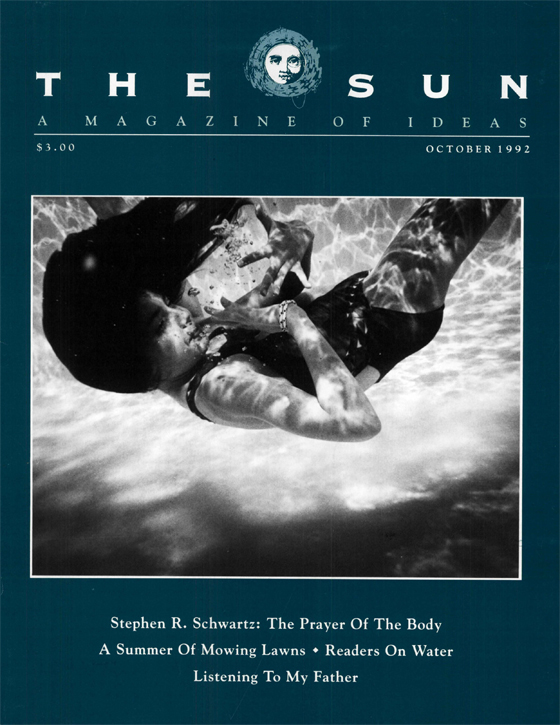 Listening To My Father

The Prayer Of The Body III

An Interview With Stephen R. Schwartz