I carefully number the bricks of my heart for later reconstruction.

If the world can only be healed by those whose hearts have healed, then the healing of hearts will have to take place in a broken world.

Though I’d been taught at our dining room table about the solar system, and knew the earth revolved around the sun, and our moon around us, I never found out the moon didn’t come up in the west until I was a writer and Herschel Brickell, the literary critic, told me I had misplaced it in a story. He said valuable words to me about my new profession: “Always be sure you get your moon in the right part of the sky.”

If truth is beauty, how come no one has their hair done in the library?

He has learned to touch his way across the bedroom in the pitch dark, touching the glass top of the bedside table and then with an outreached arm after a few blind steps the slick varnished edge of the high bureau, and from there to the knob of the bathroom door. Each touch, it occurs to him every night, leaves a little deposit of sweat and oil from the skin of his fingertips; eventually it will darken the varnished bureau edge . . . and that accumulated deposit of his groping touch, he sometimes thinks when the safety of the bathroom and its luminescent light switch has been attained, will still be there, a shadow on the varnish, a microscopic cloud of his body oils, when he is gone.

Set out from any point. They are all alike. They all lead to a point of departure.

Do everything. One thing may turn out right.

The earth is what we all have in common. It is what we are made of and what we live from, and we cannot damage it without damaging those with whom we share it. There is an uncanny resemblance between our behavior toward each other and our behavior toward the earth. By some connection we do not recognize, the willingness to exploit one becomes the willingness to exploit the other. . . . It is impossible to care for each other more or differently than we care for the earth.

First be a good animal.

How idiotic civilization is! Why be given a body if you have to keep it shut up in a case like a rare, rare fiddle?

There is no human problem which could not be solved if people would simply do as I advise.

Behavior influences consciousness. Right behavior means right consciousness. Our attitude here and now influences the entire environment: our words, actions, ways of holding and moving ourselves, they all influence what happens around us and inside us. The actions of every instant, every day, must be right. . . . Every gesture is important. How we eat, how we put on our clothes, how we wash ourselves, how we go to the toilet, how we put our things away, how we act with other people, family, wife, work. How we are — totally — in every single gesture.

It always comes back to the same necessity: go deep enough and there is a bedrock of truth, however hard.

We do not know what anything is. The summarization of our existence is Mystery, absolute, unqualified confrontation with what we cannot know. And no matter how sophisticated we become by experience, this will always be true of us.

It doesn’t take a big brain to figure out that it’s three strikes and you’re out. 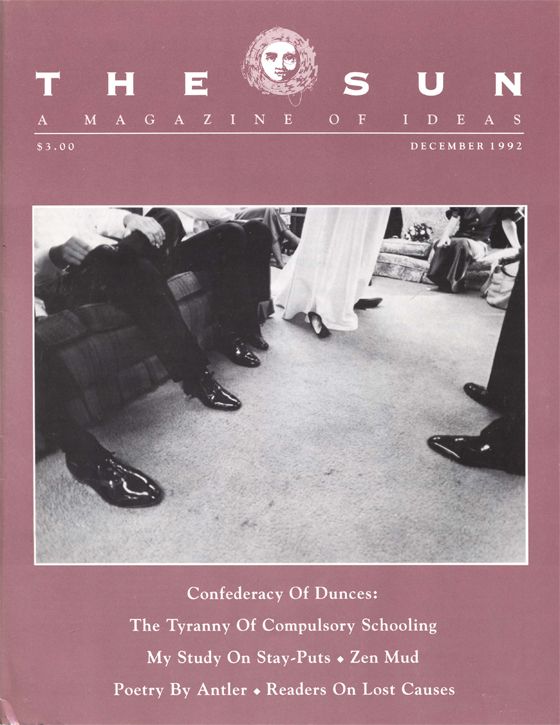