You really have to do something about your mail karma. Have you always had this problem?

I am referring to the postcard you mailed to me in early April of 1993 — that got here one October afternoon. To refresh your memory, nine months ago you suggested that you might be printing some excerpts from my book Crip Zen [“Crip Zen,” July 1993].

Since your tardy card arrived, a half-year late, the world has trundled along about 6,000,000 miles farther in its eternal, plodding pace about the sun. We have seen several countries and a thousand species expire — or come close to it.

In this time, your magazine has had many letters of love (and some of hate); I have had yet another breakdown (and mostly recovered); and close to 136,986,630 people have passed on to what they laughingly call “their maker.”

Much water has flowed under the bridge in the meantime: 898,000,000,000 quite muddy gallons, to be exact, if you are speaking of the same bridge as I — namely my favorite, the Huey Long Memorial Bridge, just outside New Orleans.

You and I are still here, still wondering what it all means, and probably, knowing you (and knowing me, somewhat), still fretting about it all.

After you printed “Crip Zen,” I was astonished at the response. In the old days I could expect a couple of orders, and that would be it. This time, I have gotten more than thirty orders (they are still coming in), as well as one proposal of marriage, one proposal for a lifelong sex partner (female), and three or four truly touching letters from Crips who are suffering from imprisonment, mostly of the psychological sort.

The Sun, as you know, has developed a loyal core of readers who love it, and believe. How fine, eh?

Milam’s suggestion that “to find heterosexual lovers-for-a-fee, one has to go no further than the Yellow Pages,” to the Massage section, makes me positively livid. As a certified massage therapist, I provide massages for relaxation, stress reduction, and relief from the pain of carpal tunnel syndrome or sports injuries — none of which has a damn thing to do with sex!

I resent Milam’s insinuation that all massage therapists are simply prostitutes hiding behind the “massage” name. Most of us went to accredited massage schools, sometimes taking as many as three thousand hours of classes before being allowed to practice. Massage therapy is fighting for legitimacy in the medical field, and practitioners merit the same respect accorded to physical therapists, chiropractors, and others. I feel we deserve an apology.

The article “Crip Zen” is very, very good. I am a practicing psychiatrist. Milam’s book CripZen should be in the library of every rehabilitation hospital in the country.

Lorenzo Wilson Milam’s “Crip Zen” and Gillian Kendall’s “Progress” [July 1993] touched me deeply. Kendall’s story is a wonderful chronicle of nonjudgmental awareness in the moment, of all the internal struggles with feelings and choices and self-evaluations this involves. How could we possibly “improve” this wonderful, self-doubting, ambivalent individual who narrates?

These two perspectives on disabled persons — one from the outside, one from the inside — brought me into clear contact for the first time with a part of myself I have long projected on “them” (the disabled). For many years I’ve been particularly attracted to men in wheelchairs because I imagined that they have achieved some lofty spiritual wholeness in order to cope with their losses. The letter from Phil in “Crip Zen” shocked me out of my illusions and forced me to confront a cripple who just wants his hairy anus rubbed by a gay man. Milam relates to this not as an addictive, dysfunctional atrocity but as a desire for love. Who am I to judge how love looks to one person or another? And who has the right to award points for the way one person copes with loss or stress and to dock others for the way they do it? Cripples and manic depressives have their trials and their entitlements, and so do we all in this incredibly complex and difficult world.

Thank you for the perspective you provide, and for the modeling of intimacy that helps all of us heal ourselves simply by having the courage to accept being who we are and living the lives we have.

Throughout time (and literature), we reporters have had to take quite a beating. The common phrase is “killing the messenger.” Oedipus was quick to strike down the old man who revealed his sad origins; Macbeth called his messenger a “cream-faced loon” and said that “the devil should damn thee black.”

In my thoughts on sexual partners, I am not advocating, God knows, that one might call up a trained, respectable masseuse and expect a night of bliss. I am, rather, reporting that there are, in most cities, ample opportunities for heterosexuals to let their fingers do the walking if they need passionate relief. They can accomplish this by looking in the Massage section of the Yellow Pages.

Rather than be irate at me, Phoenix Hocking should ask (or perhaps demand) that the telephone company begin to make some distinction between the obvious massage-for-lust folks and the respectable massage-for-wellness people. Until that sweet day, I am afraid the confusion — which is certainly not of my making (nor of hers) — will be perpetuated. 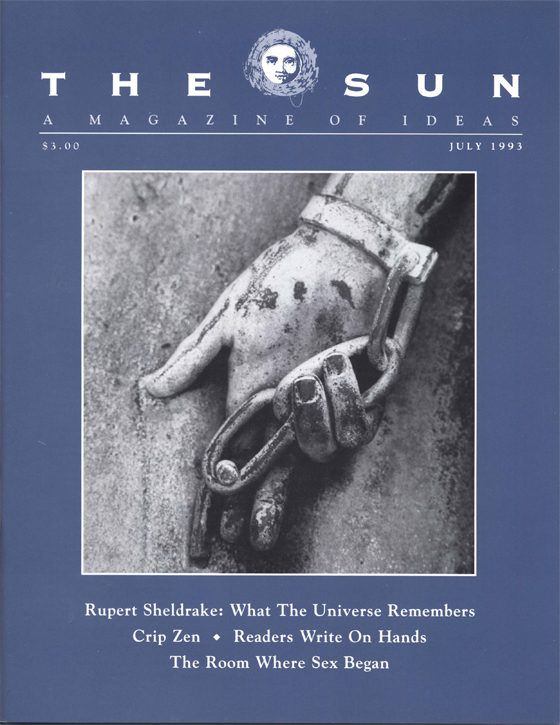 What The Universe Remembers

An Interview With Rupert Sheldrake