I dreamt recently about the rundown house that used to be The Sun’s office: I was complaining to a young woman how disorganized everything looked — not like in the old days when the stacks of magazines and boxes of manila envelopes and extra rolls of toilet paper were all neatly stacked. But it was no longer The Sun’s office, she reminded me. Besides, she didn’t care about the old days.

As The Sun turns twenty this month, I’m tempted to reminisce. The dream warns me to restrain myself. Many of The Sun’s readers were in grade school when I started the magazine. And the old days weren’t better (or worse) than today, just different. The office is in a more spacious building now, there are computers on every desk, but shaping each issue is still a challenge, and a worn-down pencil the only tool an editor really needs. Back then, I peddled the magazine on the streets of Chapel Hill; now, there are twenty thousand subscribers all over the country. But there’s always just one reader, one writer: The Sun stretches between them like a string between two cans.

No dewy reminiscences, then. But let me drop anchor for a moment, and peer into these dark waters, and thank the god of storms. I marvel that The Sun didn’t run aground and break apart like so many idealistic ventures. Hundreds of magazines were started in the sixties and seventies; few survived. Yet success, too, can be dangerous, one more excuse not to take risks. There are enough publications that play on our fear and greed.

The Sun tries to be different: a journal that lives at the margins of popular culture without making a religion out of it, that acknowledges our kinship with one another by what we don’t print as well as what we do. Not carrying ads may not seem practical, for example, but sometimes the most practical, the most political, the most beautiful thing we can do is say no.

The Sun is my lover, my teacher, my child: sweat of my brow, prayer rising from my lips. When I started the magazine, I was a barefoot hippie with hair down to my shoulders, a renegade who used his handsomely mounted college degrees as cutting boards in a gesture of defiance against the world he thought he’d left behind. My hair is shorter now, and I don’t thumb my nose at those with different values, or at a world I can’t pretend I’ve transcended. I’ve learned that there can be dignity in being a businessman; that one can pay the bills on time and still be an artist; that artists need to eat too (though sparingly).

But I still measure success by how close we stay to the rawness and surprise of feelings, to our brokenness and our search for love. On bad days, I lose faith: The Sun is too white, I think, too middle-class, too male — just like me. The Sun is too lofty, I worry: there’s too much incense in the air, too many gurus working the street.

Better the question than the answer. Better the moment that brings us to our knees. We weep. We tell our story. Language still hints at what can’t be said.

So let me just say thanks for the many acts of kindness that have preserved this wobbly enterprise, for the donations from readers who gave unstintingly when the need was dire. For Ram Dass, who filled an auditorium so we could pay the printer. For Lorenzo, who published A Bell Ringing in the Empty Sky. For Phil, who let me talk him out of raising the rent. For Julian, who reached with strong arms to a drowning man. For Pete, who gave me a job digging ditches and shoveling manure when The Sun ran out of cash.

I’m thankful, too, for the dedicated few who work here today, and for those on whose shoulders we stand. So many smart, temperamental, committed people have labored beside me over the years, too many names to mention. Sooner or later everyone leaves for a different city, a different boss, a different dream. Too many goodbyes.

I’m the one who stays, still fool enough to try to make each issue better than the last. Twenty years. I tip my hat to history; someday we’ll all be dust. Now, as then, I’m up before dawn, pecking away at these keys. Soon birds will sing and morning will smile, and shake loose her hair, and open her tiny buttons one by one. 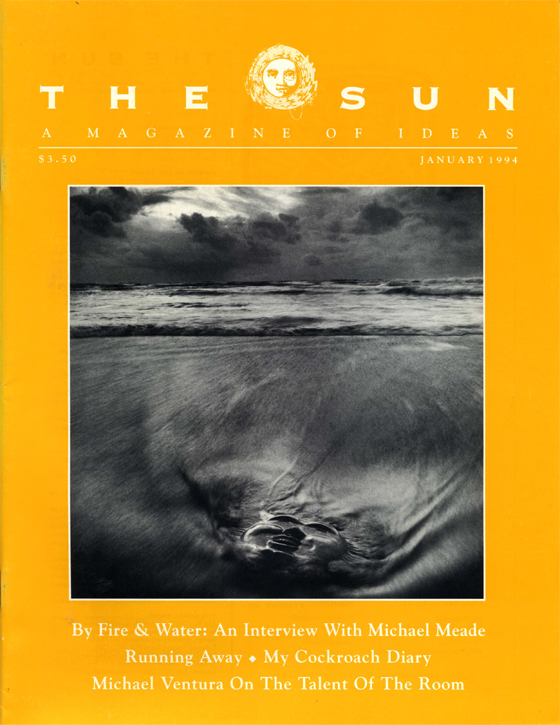