Commander Arthur Wazu, a broken man, sat disconsolately on the spaceship veranda, gazing at Shlerpy, one of the nine moons of planet 4-b.

Wazu was stoned, having smoked some pot in a third level refrigeration room with Refrigeration Mate First Class Nancy Touchet (pronounced Too-shay!), the craft’s dope dealer. Wazu couldn’t imagine how he was going to get his rocket ship past Shlerpy to pretty far outer space for one of the biggest missions in his career as space commander.

He had been ordered by Control to rendezvous with the vaginal-shaped Comet Igor, place his space ship in the steaming center of the comet and — with the proper assist from the engine room — work up to the first Cosmic Orgasm.

Wazu was still mooning over snarled social plans. He had hoped to have sex with Mate Touchet in the refrigeration room. However he had gotten excited far too early and had come all over the wallpaper in Mate Touchet’s office. It was a big mess, a “telltale sign,” said Mate Touchet. She got a sponge, wiped off the wallpaper, and said, “Captain Wazu, you are a big slob.”

Wazu’s mind wandered to his mission as he sunk into the lounge chair. He scratched his bald head. Wazu had been bald since attempting to train his hair with STP motor oil back at the Space Academy.

Wazu had wanted to be a spaceman all his life. He grew up in Pueblo Pueblo near San Cuclillo on Puerto Rico. While the other kids played with balls and boxes Wazu was interested only in space travel. He would sit for many hours, sometimes many days, on the roof of his family’s hacienda and look at Exoon, once called The Moon but long since renamed for the American company that took over the world in the 20th Century. Wazu had first met Dr. Dick, the ship’s mental hygienist, at the Space Academy. Dr. Dick wasn’t a doctor then, just a wise ass from Salvage City, the cupcake capital of Connecticut. It was at the Space Academy, too, that Wazu first met Louella Gungreis, now Wazu’s vice commander.

Louella was a year behind Wazu and majoring in business administration in space and raku. Wazu first came upon her in the Academy cafeteria. She was sitting near a machine which produced Tomato Sauce on Edible (only slightly in Wazu’s view) Cardboard and arguing with an upperclassman, a midget, about the purpose of existence.

“Everything wants to live — that’s the main purpose of all life,” Louella was saying. “To survive and reproduce. To keep the breed, the race, the genus, the class, the category, the specific form, the type, the kind going.”

“I see,” said the midget, “but in my opinion everyone — everyone — has a screw loose.”

Wazu didn’t see Louella Gungreis again until the following year when she sat in front of him in their Applied Re-Entry class. Wazu had a crush on Louella by this time. However, Louella turned him off. She made faces at Wazu and made funny noises with her abundant lips.

It was a full decade later that Wazu and Louella stood at attention, at Space Mall, as their divisional superior and her assistant briefed them on their try for an orgasm in the deep reaches of space.

“It is this way now — it has always been this way ” said the divisional commander. “The rate of orgasm among females on earth is abysmal. Only 30 percent of women, according to Masters and Johnson Foundation reports down the ages, have orgasm. In fact, only 60 percent of women on earth have ever reached orgasm through any means. This is a deep, pervasive problem, a problem leading to other problems.”

The superior paused, and Wazu and Louella both gave concerned frowns.

“There will not be peace on the planet Earth,” said the superior, “until there is Universal Climax there — until women all over, big women, small women, working women, red women, yellow women, all women, reach orgasm, regularly. There is just so much pressure an organism can take before the energy builds to a boiling point and — zowieeeeee,” said the superior. “Frustration, unhappiness, melancholia.”

“What about male orgasm,” Wazu asked with some temerity.

“Here,” said the superior, “the statistics are different. Most males do have orgasm but, of course, premature ejaculation is rampant.”

Wazu was startled and shifted his gaze quickly from the superior, so she would not recognize that she had struck a raw nerve.

The superior went on to say that by staging the first orgasm in space, “we will be spreading the message of Peace and Goodwill through the Universe.”

Spaceship TR-2, carrying 421 souls, and 311 other bodies and 1,654 bionics and 4,649 assorted, mechanical functionaries aboard — not to mention the animals and the tropical fish — moved languidly on its mission. Dr. Dick came on to the veranda. He had been looking for Wazu.

“I just had some succulent saurbrauten and I was thinking,” said, Dr. Dick. “Schools are our last outposts of hope.”

“This is true,” said Wazu, as the spaceship and everybody and thing on it dissolved.

“Where in space are we?” said Dr. Dick. He couldn’t see a thing. However he sensed Wazu’s aura nearby.

There was the crackle that lightning makes.

“Can you see anything?” said Wazu.

“What color is it?” said the commander.

Suddenly, the two men felt their spirits rushing rapidly into a receptacle — exactly the opposite feeling that steam has when it leaves the boiling pot.

Dr. Dick just had a chance to say: “Wazu, can you see the color of my aura?”

“Can you figure that?” said the mental hygienist.

Wazu was about to answer when he and Dr. Dick’s spirits hit the bottom of the receptacle. The bottom felt somewhat like chopped chicken liver. The spirit of a stern man appeared, a spirit almost discernible behind an aura of greys. “I give you this message.” said the spirit, “Don’t fuck around in this universe.”

Wazu was not intimidated.

“Why not?” his spirit replied.

“Because unless you intend to reproduce, you shouldn’t fuck,” the spirit said, with much weight and gravity on each word.

“My dear spirit,” said Dr. Dick’s spirit, “Don’t you have any notion of good times, of fun, of pleasure?”

“You should leave the comet Igor alone,” said the spirit. “Cancel your mission.”

“You are attempting to frustrate us,” said Wazu.

An instant later, Wazu and Dr. Dick were back on the veranda.

Louella Grungreis’s voice could be heard over the PA system. “Would everyone and thing please resume your places. We dissolved for a few seconds but everything is now back to normal.”

Wazu squeezed back on the lounge chair. Dr. Dick began playing with a yo yo.

“I think we should have a staff meeting on the situation,” said Wazu.

Later, over a mushroom with bananas pizza, Wazu said: “Dr. Dick here and I have just had a confrontation with a repressive spirit while the ship was briefly dissolved. It has been suggested, strongly recommended, let me say, that we frustrate our mission, and turn back.”

“Basically, this spirit didn’t feel it was proper to fuck around in space.”

“But the intention of this mission is not to reproduce as such, but just to bring home the awesome importance of orgasm,” said Gungreis.

Refrigeration Mate Nancy Touchet interrupted. “One thing has nothing necessarily to do with another.”

A secret vote was taken with each staff officer voting on pieces of napkin. There was one extra piece and Wazu couldn’t figure this. It was the only ‘no’ vote.

The approach to Comet Igor was a routine affair. Wazu himself was on duty in the control room when the comet made its appearance on the scope. Dr. Dick and engineer, Sanford T. Alley, were called to the control room for consultation.

A flight plan was adopted, and the ship’s computer so advised. “This will be high civilization,” said Dr. Dick. “Computerized intercourse, a stellar sensation, cometary orgasm — I’m just so excited.”

That night most of the crew was playing bingo, the favorite game aboard TR-2. “When it comes to money all men speak the same language,” Commander Wazu was saying to his table, which included Dr. Dick and Nancy Touchet.

He looked at his watch. Target time was only six hours away. “You’ll have to excuse me,” Wazu said. There was a good deal of anticipation in Wazu’s lower stomach.

“Gets you excited — doesn’t it, really now,” Wazu replied. He noticed a certain shy uplift on the edges of Louella Gungreis’s mouth — and what a luscious mouth.

Through their years of working together, Louella sometimes took a fancy for Wazu, although she thought it was mostly at her most perverse moments. Louella often took a fancy to bald men. She didn’t like Wazu’s personality though. It would take a basic change to allow her to be sexually attracted to Wazu on a consistent basis, she had decided. She didn’t like Wazu’s breath. She thought it smelled of merthiolate.

As the hours wore on, Wazu and Louella worked mightily, helped by a crew whose numbers swelled as the time neared. People poured from the bingo game to take their positions.

“59 minutes and counting,” said Wazu through the PA system.

The computer was by now spinning and turning and wheezing at an extraordinary rate.

Dr. Dick was talking about his mother to a navigation officer working alongside him. Down in the refrigeration room, Mate Touchet was reading a book about apple sculpture. A romantic sequence of music began being broadcast over the ship’s PA system.

Suddenly, bells sounded, oil began leaking and emblazoned on the multi-dotted computer screen were the words: PREMATURE ORGASM PREMATURE ORGASM. The ship came to a complete halt as it was about to enter the steaming center of the comet, and slowly began withdrawing, limpishly.

“What went wrong?” exclaimed Wazu with some pain. He grabbed the phone to the engine room and asked, excitedly, of Alley, whether “you’ve been moving us too fast.”

“Not these engines, chief,” said Alley.

“The mission’s a failure,” Wazu said, with anxiety.

“I think,” said Louella Gungreis, reeking of wisdom, “we’re going to have to work on this.”

It was Nancy Touchet who caught sight of it, as she looked out a refrigeration room window: a spirit in the sky which to her looked like a spirit she had seen once before. But she decided not to tell anyone. Not at least then. 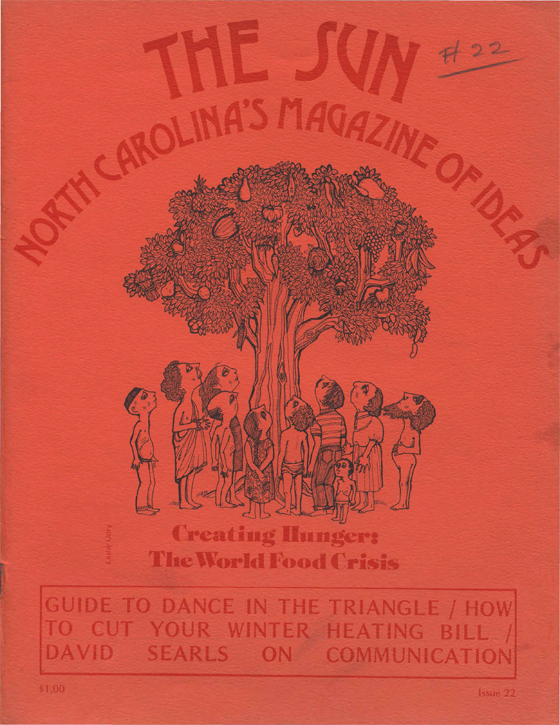 The Medium Is The Mind