Portrait Of The Artist

I was painting on the night my mother died. Without realizing it then, I was saved by my obstinacy, my insistence on painting no matter what. Although painting has never been a replacement for tears — or for joy either — it was a healer for that moment. During my years in Romania, I had learned to go back to my art every time I was down. Painting was like a good book on a shelf: whenever I needed it, it was there.

I needed it often. After my father died in 1982, my mother and I were forced to move from a large house into a one-bedroom apartment — a family of two was not allowed larger living quarters. During the day I went to school, at night I worked in a small factory, and when I could I painted in the kitchen using a chair for an easel. I froze during the winter in our unheated rooms, read Van Gogh’s letters, and took care of my paralyzed mother. I believed then that suffering was useful, and I attempted to live the myth of the lonely artist who continues to paint even with no promise of a better future.

Romania had been under Communist rule since 1945, but it was after Ceausescu came to power in 1965 that life really began to deteriorate. Ceausescu developed an urbanization plan for Romania based on Asian models: hundreds of villages around the country were demolished, and Bucharest — once known as “the little Paris” — was transformed into a grotesque Eastern European version of Beijing, with a touch of Disneyland thrown in. Art created before 1965 began to disappear as important paintings from museums were given as gifts to Kremlin leaders. Artist came to mean someone who painted slogans for Communist meetings. Costly exhibits filled with portraits of government leaders pleased a very dubious artistic taste. (Imagine an exhibition at the National Gallery of Art consisting entirely of portraits of Bill and Hillary Clinton: hunting, reading, posed among children, miners, and truck drivers.) In the new artistic climate, landscapes weren’t political enough and nonfigurative art was too intellectual. And for the politicians who overnight had turned from grammar-school dropouts into phony Ph.D.’s, anything intellectual was “subversive.” The Artist’s Union was infiltrated with informants for the secret police, and I still believe that one of my painting teachers was a part-time spy: brilliant, fluent in several foreign languages, and fashionably dressed in a country where you couldn’t even find toilet paper unless you had “connections,” he was selling his art abroad, in the free world.

For a while I painted landscapes: dark, abstract islands — self-portraits, perhaps, or maybe portraits of a country mired in despair. But who can paint when fear is the law? Soon I started whispering instead of talking out loud, looking for microphones under my bed, and taking care not to make sketches on the streets. Art seemed ineffective while people were being persecuted, and I felt guilty and useless working on my landscapes. Eventually, I gave up painting entirely.

I don’t know why the revolution didn’t start earlier than it did — like when a three-hundred-year-old church in Bucharest was knocked down late one night to make room for the dictator’s new palace. (I was part of the silent crowd in the street holding hands and carrying lighted candles.) Or when people attending Easter Mass were surrounded by police officers on horseback, giving me some idea of what the early days of Christianity were like.

At that point I didn’t realize that silence is a form of participation.

Then, one night in the late 1980s, a group of men dressed as street sweepers draped the statue of Lenin in Bucharest with big truck tires and set them on fire. It was a bold and daring act in a country where, it was said, for every Romanian on the street there were two secret police officers. The next morning traffic was detoured while workers from nearby factories were brought in to clean the statue with razor blades. That day I realized that change was possible.

By then I had resumed painting — as a scenery painter for the National Theater of Opera and Ballet in Bucharest. There we created costumes and sets for the theater productions and for the official parades that celebrated “the victory of the socialist system.” Both the costly parades and the regular theater productions were subject to the approval of the Communist party or the secret police. Once, for the set of Romeo and Juliet, I had to remove the balcony from the famous love scene because it too closely resembled the balcony from which Ceausescu delivered his speeches. Another time I was told that “the comrade” didn’t like green, so I didn’t use that color for a few years.

After a while I began to find ways to resist. When I was asked to paint a hundred-foot portrait of Ceausescu, I declined, claiming I lacked the experience. With a secret, sad joy I started to sabotage the authorities, pouring water into the glue destined to affix government slogans; dropping open cans of paint, right before a show, across the enormous backdrops.

Then came the revolution in December 1989: the demonstrations, the fights, the blood, the children crushed by armored vehicles. I heard on Radio Free Europe reports of the massacre in front of the Intercontinental Hotel, where students were killed like bugs. But it wasn’t until the next day, when blood was being washed from the streets and a friend of mine picked up some bloodstained bullets and brought them to the studio, that I realized it was real. When I went out and saw the Communist flags burning, I cried. It seemed then that change would happen right away.

But nothing had really changed. In the summer of 1990 there was a new witch hunt for intellectuals and artists, as the neo-Communist government launched the slogan “Working is better than thinking.” I saw students beaten on the streets for nothing more than wearing American-made jeans. So late one night I sold my art collection and other belongings, and a few months later I crossed the border into Yugoslavia. I didn’t know exactly what freedom was, but I wanted to find out. I knew it must be more than the opportunity to buy oranges from the grocery store at 2:00 A.M. without bribing somebody.

I landed at Kennedy Airport on a muggy night, scared, unable to speak English. I quickly decided that if New York City was America, I’d take the first plane back.

But within a year, settled into an apartment in Southington, Connecticut, I knew I’d finally discovered freedom: the comfort of being myself in front of a blank canvas. 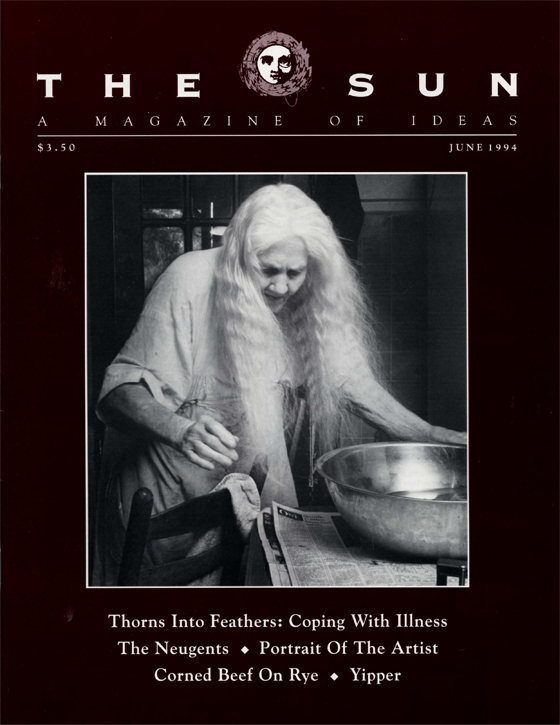