I am a woman ruled by the moon — the dark side no less than the light. A lover of monochromatic landscapes and subtle gradations, I am haunted by the shadows at the edge of the dark. Yet I cannot verify that I’ve ever encountered a ghost.

Others in my family have had the experience — it’s practically a requirement of a rural Southern Baptist upbringing steeped in stories of death and life everlasting. I remember long, shadowy summer evenings when I’d hover by my grandmother’s side in her unlighted living room as first one relative and then another spoke.

“Do you remember —” someone on my grandmother’s sofa would begin, their face hidden by darkness.

Yes, I remember. I remember that story and all the others of the summer evenings of my youth. Listening to the voices of those I loved, I strained to see spirits stalking the wood’s edge, beyond the window sash. But no spirits ever appeared to me, no intimations of powers greater than the grown-ups clustered on the sofa and chairs.

“Remember that time near the old Bonner Archibald farm?”

“Sure, I remember it,” an aunt chimed in through the darkness, picking up the story like a refrain sung so often that no song sheet is necessary.

She was a child then, traveling along a country lane at twilight, heading toward home. Off to the side she heard the sounds of hogs being fed and water running into a trough. Who could be feeding hogs so late? Then she saw the shadow of a man at the edge of the trees. “Good evening, Mr. Jarvis,” she called, trying to remember if her neighbor actually had a hog pen so close to the road. Stepping closer, she once again called, “Good evening,” but the man still failed to return her greeting. In the cottony twilight, her eyes sought his, but there were no eyes to return her gaze: the man’s body stopped at the neck.

She ran home full of fear in the gathering dark, heart pounding. Her father listened to her story and proclaimed the ghost to have been a farmer killed by his wife and her lover some years back; the farmer’s head had never been found.

Had my aunt’s father later laughed at his child’s fear? I think not. To those country people the dark was dangerously full of possibilities. A walk at night along a misty dirt road might lead to an encounter with wild animals, murderers, or even the “undead.”

“Say a prayer, Daughter, and head for home. The dead can’t hurt you” — that’s probably what her father, my grandfather, said.

Like my aunt, I was raised with respect for the dark and instilled with the proper attitude for ghost viewing — but not the nerve. How do you believe that the dead can’t harm you, when you fear them with all your heart? How do you transform yourself from a listener of other people’s stories into someone with the courage to face the life-altering events that become your own stories?

In my late twenties, I had just returned from Alaska — my first trip for the government, my employer. My father and sister met me at the airport, and I was anxious to share my adventures with them, to tear open the sackful of stories I’d collected in the North. In the car, as we sped toward home, the dark swelled around us — prime storytelling time — and I rattled on and on, my tales bubbling along like a swift, glacier-fed stream. They nodded and asked questions, then looked sadly at each other in the dark. I was so engrossed in my own adventures, so determined to transform the tales into something grander than they were, that I misunderstood my father’s and sister’s solemnness. I assumed that my story had taken a false turn, that it required more details, that it needed to be refined. I never guessed there were words they needed to speak to me, for that night I was a child filled with myself, still on a grand adventure.

When we got home, I climbed the steps two at a time and bounced into Mother’s bedroom, to which illness had confined her years before. It was empty. Her sheets lay folded. Her sweater was gone. The cup she kept by the bed — that, too, was gone. At least I think it was. Details suddenly began to slip past my storyteller’s eye, consumed by the impact of that empty space.

“Where is she? Where’s Mother?” I screamed. I ran down the stairs. Looking at their faces, I knew. They hadn’t been able to call me while I had been away, and I hadn’t allowed them to break in on my babble as we drove home.

I stood there in the living room of the house in which I had grown up — the house with the purple carpet and the orange curtains, with all the safe, familiar objects I expected always to remain the same. But a bomb had just exploded, ripping through the curtains, burning the carpet, leaving the upstairs room empty. I couldn’t breathe; I could only scream, pushing out the air in one long pitiable cry.

My father and sister cried too, their arms around me, huddling close, seeking comfort within family boundaries suddenly grown small. They recounted, one by one, the details of the last few days before my return: Mother’s recurring stomach pain, the ambulance ride in the middle of the night, my sister’s comforting presence by her side (I wished it had been my shoulder on which Mother had rested her head), the ride home after leaving her alone in the hospital room — and then the phone call.

How could my mother be gone? How could she have left without saying goodbye? The woman who had depended on me to lift her from the bed and carry her down the steps that separated her from the rest of the world: she was simply and inexcusably gone. Impossible. Sham. Trick of the moon. How could she no longer be with me when I felt her presence so keenly in the house? Perhaps she had slung her sweater around her shoulders and only gone out for some air. Hadn’t I believed as a child that her inability to walk was a trick, that in reality she strolled about the house at night doing as she pleased while I slept? I wished that it were so. And I prayed. I prayed, and I begged.

The day after my return from Alaska, we drove to North Carolina to bury my mother. She would have wanted to be laid beside her parents in the little cemetery with the aging tombstones and the woods creeping in, no more than a stone’s throw from the house where I’d heard my first stories of the dark.

On the long night before the funeral, we stayed with my aunt and uncle in a house so crowded with relations that my sister and I had to bed down in the trailer outside. We lay together, stiff with grief, still crying, still praying.

I’m not sure I slept, though probably I did. I only recall waking to a noise at the door of the trailer. Instantly I understood that it was my mother outside turning the knob, that she had already opened the screen door, and that within moments she would step inside. She had come to say goodbye. But now fear gnawed at me. Though I had begged for two days for just this visit, I could not face her. “Go away,” I shrieked as tears streamed down my face. “Go away . . . away . . . away.” The knob ceased to rattle. My sister woke beside me, wanting to know what had happened. “Mother came back,” I told her. “Mother came back and I sent her away.”

Now, years after her death, I still remember that room and the way my body turned toward the door as it began to open. Ghostmother, she has followed me these years, awaiting the story that would acknowledge her presence. She has been with me in my dreams. Sometimes my visions are of my elderly mother — tired, bent, ill, as she was near the end. But more often than not she comes to me in a dream of the woman she used to be. Her hair flows behind her in long auburn waves as it does in photographs taken when she was young. She is what I want her to be: healthy, happy, content — a gift from the moon before sickness shaped and broke her.

Did my mother really come back, or was it a dream brought on by grief? Was my grief so intense that anything might have happened — wind rattling the screen, sticks falling on the roof — and still I would have believed she was there?

We all eventually confront such dark phantasms of the heart and mind. Sometimes the moon casts its chill light across them. But more often the dark is simply the dark, powerful and unknowable, and we are left to cipher it as we may, and then tell our stories. 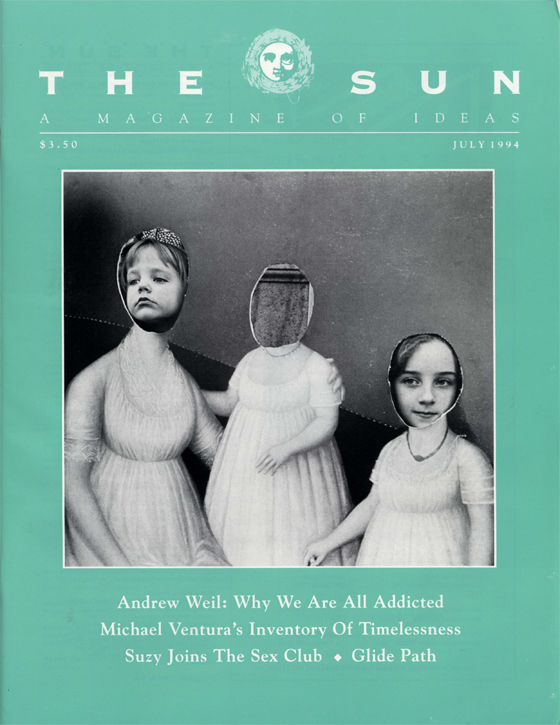