Last fall, after two years of escalating entreaties by my girlfriend, I finally agreed to move from the city to the country. More precisely, from San Francisco to northern New Mexico, to a desert of lunar silences and nights so black that I rediscovered my childhood fear of the dark.

On the eve of our flight to New Mexico, I had dreams of falling; I spent the night flopping around in bed like a fish on a dock.

Approaching Albuquerque our plane hit a trough of air that pitched two glasses of water from the tray table into my lap and brought my lunch up to midesophagus. The airplane’s wings flapped like the arms of a tightrope walker struggling for balance.

In the airport, I saw a man wearing a button that said, “Welcome to New Mexico. Land of the flea, home of the plague.” (I later learned that some of the state’s outlying areas — not far from where we were headed — were experiencing a problem with fleas carrying the bubonic plague, the same one that killed a third of the population of medieval Europe.) As I headed for the baggage claim, I heard in the back of my mind the words of the poet Rilke, reminding me that the purpose of life is to be defeated by greater and greater things. I had the uneasy feeling that I had come to the right place.

I had my reasons for moving. I needed a place where Nature lifts up her skirt and dances, where the cost of living is more hospitable to a freelance writer, and where there is no need for traffic reports. Also, the move had something to do with surrender, which Nature and midlife excel at teaching.

I found living in the wilderness overwhelming. The sheer scale of the landscape made a mockery of my sense of proportion; the hundred-mile visibility seemed to double the size of the world, making me feel very small. The land marked time, not in days and weeks, but epochs. There were hailstones the size of marbles, flash floods capable of carrying off livestock, and thunderclaps like gunshots going off next to your ear. Moving here from the city felt like coming out of a movie theater in the middle of the day.

I felt like a coward in the face of such grandeur. Its presence accused me of impotence and revealed a city dweller’s streak of hubris. It’s easy to imagine yourself king of the hill when there is little besides the distant rumor of death to instruct you otherwise.

Jacques Cousteau once remarked that when you enter the ocean you enter the food chain — and not necessarily at the top. Here in the desert, when it snows and the land fills up with footprints, I see clearly my relative position in the scheme of things, and I do not have tenure. I have followed bear tracks for a mile along a fire road, and mountain-lion tracks running like a dotted line between junipers on the mesa. I have seen blood on the snow, have felt my heart pounding at the sound of rustling.

Several months after moving, I was sitting at my desk staring out the window at columns of thunderheads lumbering across the afternoon sky, the wind pounding like kettledrums. Suddenly a bird crashed into the window with a bony thud and bounced off, leaving a clump of feathers stuck to the glass.

I stood up from my chair. The bird, a meadowlark, lay on the ground, stunned. At that instant a magpie three times the meadowlark’s size barreled down from a nearby tree and pecked the helpless bird to death. When the meadowlark was dead, the magpie took it in its beak up to a low branch of the apricot tree, set it there, and flew off.

I stumbled outside, horrified yet awestruck, wondering what the reason was for the act of carnage I had just witnessed. Was this the end of a chase? Some violent spasm of territorial imperative? Or was it a mercy killing?

Four days later, that clump of feathers was still stuck to my office window like a suicide note, and I was still rattled. It wasn’t just the violence or its suddenness, but that I didn’t understand what it meant.

I tried to distract myself from my discomfort with the one activity that has always afforded me a sense of control over my life — my work. I failed miserably. It was as if I had been bitten by a rattlesnake: my panic only caused the poison to travel more rapidly through my system.

This anxiety felt painfully familiar. In the city such frenzy was reflected everywhere and seemed normal. Now, with the desert and the distant mountains standing as indictments of my restlessness and commotion, it also felt laughable and damnable. I think there is more grace in a living acre of ground than in the lives of most people — my own included.

The magpie incident had deepened my sense of vulnerability, of not knowing — and I didn’t like that one bit. Perhaps it was because I grew up in a culture that can’t distinguish between uncertainty and anxiety, that views mystery as something to be solved, not serenaded. Perhaps it was coming from a family of scientists and sleuths. My father used to read to me from a book of “minute mysteries,” and make me figure out whodunit. I learned, at the altar of my father’s knee, that with sheer determination almost anything could be figured out.

But life — and certainly the natural world — was not just another “minute mystery” to solve, and not everything could be figured out. Having lots of answers brought me no closer to feeling secure in the world; making peace with the questions seemed the better bet.

In the months after I buried the meadowlark, I chose (uncharacteristically) to let the mystery of its demise remain unsolved. I didn’t investigate. I wondered.

Then one afternoon, while I was shoveling snow, a falling flash of black like a chunk of obsidian caught my eye and took my breath away. It dropped toward the ground like a stone from some unseen height, and at the last possible second flared its wings, amazing me with a fine upward arc: a magpie, perhaps the same one.

I stopped wondering. I called the ornithology department at the University of New Mexico. Magpies, a young woman there told me, are thievish and opportunistic and will take advantage of an injured bird for the sake of an easy meal. That, she said, is what I had seen.

At the edges of ancient maps, cartographers used to draw dragons that warned of the dangers of the unknown. Disregarding their admonitions by literally moving into the unknown, I learn that in hanging on to the familiar, I have only what is familiar. Letting go, I have no idea what comes next, and life takes on the contours of a cloud rolling overhead, changing shape moment to moment like a living Rorschach. First it’s a gargoyle, then a fish, then a serpent. There’s no predicting. Sometimes it’s a magpie, sometimes a meadowlark. All I know for sure is that I am, like the magpie, resourceful, and like the meadowlark, vulnerable.

Reading your November issue, I tried to reconcile the quote from Rilke in the Correspondence section — “The purpose of life is to be defeated by greater and greater things” — and the Sunbeam from Simone Weil: “The only way into truth is through one’s own annihilation; through dwelling a long time in a state of extreme and total humiliation.”

Am I to conclude that humiliation and defeat are the sperm and egg of joy?

I stand bemused by it all.

I’ve been reading your magazine in bits and pieces for three or four months now. The August issue finally did it. Gregg Levoy’s “Off the Map” thrilled and delighted me. The first thing that got me was the quote from Rilke: “The purpose of life is to be defeated by greater and greater things.” The very same epiphany had occurred to me in the shower that morning.

Next came the part about surrender being something that midlife excels at teaching. It was almost as if the guy had been in the shower with me.

I knew I was going to subscribe when I got to the bottom of the second page and read, “That clump of feathers was still stuck to my office window like a suicide note.” I don’t know who Levoy is, but I’d love him for a pen pal.

Necia Fulton, California
More Letters
Thank You Your donations helped to keep our ad-free, nonprofit magazine in circulation last year, funding everything from production to distribution. Learn how you made a difference last year. Learn More 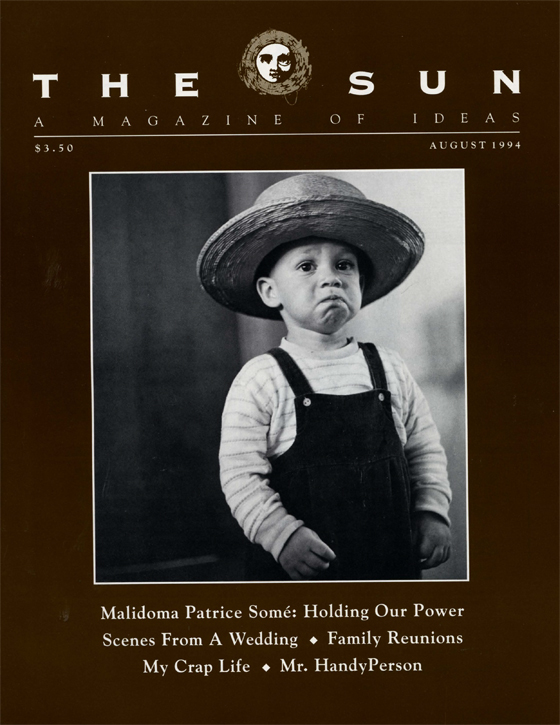 Scenes From A Wedding

The End of the Road