Motorcycle Jim used to go with Katie. That was before his biker lifestyle proved a tough, chalky mix with Katie’s desire for respectability and security. They broke up, and Motorcycle Jim did what a guy named Motorcycle does: loaded his bike, hitched up his jeans, and hit the road.

The three of us used to attend the same twelve-step meetings in Florida. If ever there was someone at odds with the Florida summer, it was Jim. On days so hot and wet they could be sliced with dull knives, Jim wore his leathers.

Which Katie liked. She liked his style: white starched-and-cuffed shirts and leather jackets and scuffed boots and worn jeans spotted with oil from a Harley engine. And tattoos. Jim was a tattooed man. They started at his wrists and went up his arms.

I have a tattoo also, but I don’t think I ever told Jim. With my knowledge of the painful needle pricks it took just to draw a two-inch-high parrot on my back, the pain Jim must have endured impressed me as stupidly insane, excess for the sake of excess. Considering that we came together courtesy of our almost-professional substance abuse, I was hardly one to judge.

Katie told me that Jim’s tattoos went across his shoulders and down his back as well. How much further they went either I didn’t ask or don’t recall. I had fallen in love with Katie and found no thrill in discussing Jim’s tattoos. I pictured my Katie running her hands over Jim’s torso — past sunrises and sunsets and motorcycles and flamingos and Valkyrie babes and skulls — to his waist, then curling her fingers around his cracked leather belt and pulling down his jeans to continue the picture show. Some primal fear was aroused by this image, some ancient, atavistic jealousy and a nagging sense that I was just not enough.

When I was in the navy I once honchoed the deck gang on a missile cruiser. They were a rough-edged lot, pirates mixed in with kids fresh out of boot camp. I never quite got used to the combination of fresh-scrubbed faces, nicked by razors new to the hand, and blood red noses above grizzled, whiskered chins. They chipped rust and painted the steel deck and tied knots in huge mooring lines, and roared off the ship at liberty call to meet up with the sort of woman who lives in a mobile home on the edge of town and smokes cigarettes without filters.

To a man, the deck gang had tattoos: crossed anchors on their forearms, death-rider skeletons on their backs, eagles on their chests — and, frequently, hearts pierced by arrows on their upper arms. With a name underneath.

One boatswain’s mate told me he had the names tattooed in such a way as to make them easy to change when circumstances dictated. He prided himself on his flexibility. Another sailor simply had the artist line out the woman’s name when she had broken his heart (as he was confident any woman eventually would). In a process as inevitable as the tide, another woman would become his true love, and he would visit the tattoo parlor and have the new name inked in. The names were halfway to his elbow.

I got my own tattoo one July night in Savannah, Georgia. I’d debated the pros and cons all the previous year. My wife, now my ex, was opposed; she hated needles — wouldn’t even pierce her ears — and feared that I would come back from the tattoo parlor with strange, unexplained lumps on the insides of my arms and scarlet flushes around my adenoids, and later keel over and die.

I recruited a friend to go with me — as witness and health inspector — and we motored off through the swampy low country, dark and dense and wet and hot, to Savannah and the California Tattoo Company.

As it turned out, the parlor was well lit and as hygienic as any other place combining needles and the human body. The tattoo artist had a full beard, shot through with gray, and several ornate tattoos decorating his muscles. Ruby reds, indigo blues, and deep-sea greens curled and danced on his ropy forearms. He had that walking-time-bomb look of men without a comfortable place in life.

The tattoo artist turned out to be gentle, although the actual tattooing was not, despite his careful dabbing and quiet murmuring talk. Being pierced again and again with a needle until one poke became indistinguishable from the next made me ponder the nature of pain. Halfway through the inking of the outline, I knew that I would never do it again. It was too late to go back; I would endure the rest. But I knew with calm assurance that I was getting my first, and my last, tattoo.

We fell in love and married with a speed so breathtaking and heart stopping that friends told us later they’d seen it coming. And the fullness of my love was such that I wanted to go back and endure a little more pain to mark myself as permanently attached to Katie, transfixed forever by her love: I wanted a heart with an arrow and Katie inked beneath it.

She thought my idea was laughable and unnecessary. But I remained haunted by Motorcycle Jim and his tattoo excess. Like many men, I am often driven solely by the competitive impulse to exceed, to climb higher, to run faster: to better the other fellow.

I never asked, and Katie never mentioned it, but I think Motorcycle Jim, for all his sunrises, sunsets, birds, and lizards, never had Katie’s name written on his body. A Katie on my arm would best him, or at least his memory. For fifty bucks and an hour’s time, I thought, I could erase envy with a heart pierced by an arrow on my upper arm.

As if my own marriage to her — our vows, my obvious devotion — were insufficient.

I married not only Katie, but her two children. It was easy to build a bridge to the younger, a towheaded boy named Nik (I had been a six-year-old boy and knew how to bring joy to his face). The older, Princess, proved the deepest and most profound mystery I’d ever encountered. Although I have three sisters, they might as well have lived in another town — rather than another bedroom — for all I recall of growing up with them. I proved quite capable of bringing unintentional tears to Princess’s face with jokes, games, and tricks I thought hilarious.

Princess and I kept trying. She forgave my clumsiness and patiently waited for me to “get it.” Her faith was touching; she assumed that as long as I kept trying, sooner or later I would get it. I didn’t know how to explain to her that I might try for years and still fail to find the heart of a nine-year-old girl.

It was Princess who ended my obsession with getting another tattoo. She, who had endured the worst from adults throughout her brief life — patiently waiting out their boozing, their infidelities, their own childishness — showed patience with me.

Princess and I were napping through the doldrums of a Florida summer afternoon, the humid air heavy like a hot hand upon us. My back was turned to her as we lay on the bed, looking out the window at palm trees across the street. I felt her little fingers tracing the parrot tattoo on my back, drawing it into my skin.

“I like this tattoo,” she said as her fingers sketched. “It has nice colors.”

“Jim had a lot of tattoos,” she continued, and I braced myself. The kids and I were still getting to know each other, and for them learning consisted mainly of comparison. I was compared to other men they had known, measured against them. Now Princess was about to bring up Jim and his tattoos, and it was obvious that I had only the one. I hated that I couldn’t compete with Jim, but then I detested myself for being so shallow of soul that I wouldn’t even let a child love me for who I am. I didn’t trust gangly, bespectacled, blond Princess to be any more loving than my own gimped heart could imagine.

Her fingers continued to trace the bird. “Does it have a name?” she asked.

“Max,” I said. I named it for the parrot my first wife had brought into our now-defunct bond.

“I like that name,” she said. “Jim had a lot of tattoos,” she repeated. I waited, small in my pride.

And I didn’t need a heart with Katie beneath it anymore. 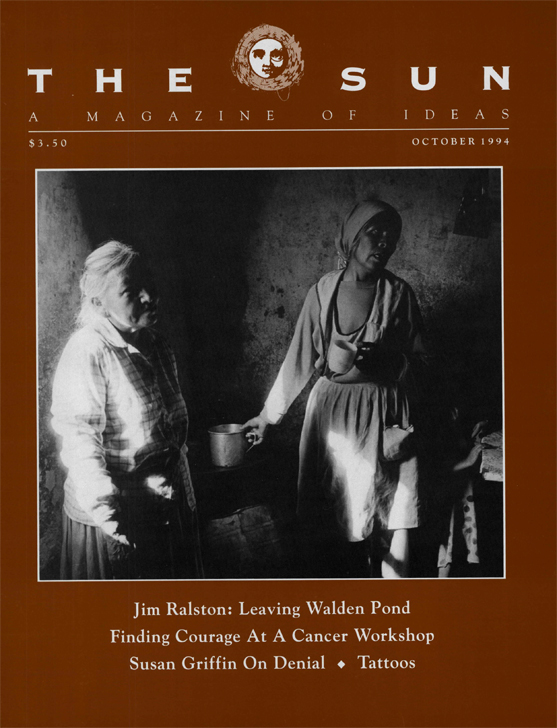