Instead of going on vacation, everyone should stay home.

After all, what do you say to someone who has been somewhere? “How was it?” No, a person who has just come back from someplace — China, let’s say — has probably already been asked, “How was it?” and expected to state for the record what China is truly like. I know a woman who did go to China. Although it didn’t once cross my mind for the year she was there to write to her, after she got back I tried three times. I couldn’t get further than “How was it?”

I finally finished the letter after nine months — quite a while, even if you tell time with a calendar, which is preferable in many ways to telling time with a clock. For one thing, a clock treats each minute the same as any other minute. But not all minutes are created equal. Minutes within the gravitational field of grief or algebra, for instance, are longer. You don’t need Einstein to tell you that. (Einstein, in fact, said the faster you go, the less time you use. Which is to say, the faster you go, the faster you go. Wouldn’t take but a minute to explain quantum physics if you knew a little algebra.) One morning last April, twenty minutes lasted so long that I was able to get ahead of them and look back to see how hard a time they were giving me. Clocks don’t take that sort of variation into account.

Now, a calendar’s different. It gives you space to note how unequal the days are and lets you name your favorites. Holidays are printed in red. With appointment calendars, some days are even given more room than others, which is sensible.

In my nine-month-old letter, I told the woman who went to China that I didn’t envy her having to sum up her experience of exotic lands. However, “How was it?” is not a question I’m in any danger of having to field, since Cincinnati is about as rare a place as I’ve ever been.

Not that things don’t happen in Cincinnati. I was once awakened there at three in the morning by a hooker pounding on my motel-room door. I was dreaming that I was driving nails. I finally woke up and made it to the door. A tired-looking woman with heavy makeup stood in the hallway.

“You the one who called?” she asked.

Now, what kind of conclusion could you draw about a place after that? And yet, it’s what I remember best about Cincinnati, except for chili served over spaghetti. How do I, who have been there, answer “How was Cincinnati?”

It may not matter anymore where any of us have actually been. We can now visit our national parks by videocassette, in which, as one company offering such tapes promises, “the remarkable sights and sounds are preserved for you.”

A curator at the Smithsonian Institution — where they keep thousands of carefully preserved dead animals — endorses visiting the national parks by video. He says, “I felt I was there in person, experiencing the canyon.” I imagine him adding, “Only not so hot and dry. Or — I can’t remember — so cold and wet.”

A lot of people will buy these videos, which will allow them to stay home. Last summer it got to where you couldn’t move around in Yosemite without bumping into someone with a camera hoisted onto his shoulder. I heard one man yell at his kids, “Get off those rocks and come over here. I’m trying to take some damn pictures!” He wouldn’t have had to go to all that trouble if he’d bought one of those videos.

With a video vacation, you’ll never have to make another excuse about some important scenic wonder you saw but failed to get on tape. You can hand down to your children and your children’s children your complete experience of the national parks. For as long as the tape holds out.

“In sufficient accumulation,” wrote E. B. White, “radio sounds and television sights may become more familiar to us than their originals.” A good example of this is a videocassette called Puppy Pals, which I saw in a store recently. The back of the package said:

Every child dreams of having a puppy of their very own. Now, Puppy Pals lets you make your child’s dream come true. Puppy Pals features all the real-live, bouncing, running, wrestling, sniffing, tail-wagging baby puppies any child could possibly want. Set to an original musical soundtrack, this program will delight children while stimulating them to discuss their feelings and emotions. Thirty minutes. Not rated.

On my latest trip, I didn’t take my camera out until the last part of one afternoon in Virginia, and then only because my wife had warned me, “You better not come back without any pictures.” So I snapped twenty-four pictures out the driver’s-side window as I drove from Redhouse to Baltimore, Maryland. When she saw them, Cori asked, “What is this? This is a picture of a telephone pole.”

Oh, they’re nothing special. Mood pictures, impressionistic snapshots. They remind me of how hot it was or how surprised I was to see tobacco growing on small farms. I was really just trying to get my camera to quit nagging me to comment on everything I did. (My dad does that with his video camera, talking the whole time he’s filming: “Here’s Keith walking down the stairs. Wave! It’s his birthday. Getting to be an old man. Now Cori’s coming in from the kitchen. . . .” He’s got a great visual record, as they say, but he’s never been where he’s been — only his camera has.)

The problem with a camera is that it gets between you and what you see and argues that every moment of your vacation was just the same as any other. The viewfinder finds its view and tells its story, then tries to make you stick to it. If you let it, a camera will fit you with a prosthetic memory. An artificial heart. It will hasten the hardening of the present into the past and blur the distinction between tool and tool user, until you’re no longer certain whether you had a good time on your vacation or even whether you were really there.

Then one day, when you pull up to the Fotomat, the smiling kid who reminds you faintly of someone you’ve seen in a commercial will hand you an envelope containing the glossy pictures from your vacation. You’ll check out the authenticity of your memories. 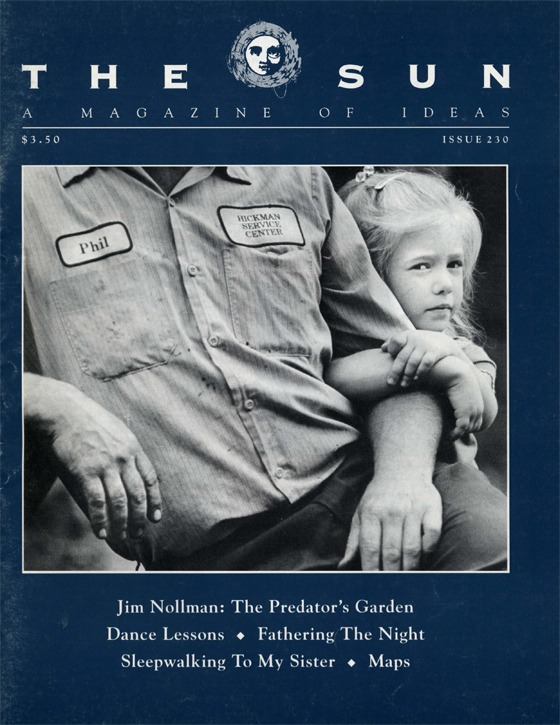 Sleepwalking To My Sister