The most dangerous word in any human tongue is the word for brother. It’s inflammatory.

I don’t like people who have never fallen or stumbled. Their virtue is lifeless and it isn’t of much value. Life hasn’t revealed its beauty to them.

We find the most terrible form of atheism, not in the militant and passionate struggle against the idea of God himself, but in the practical atheism of everyday living, in indifference and torpor. We often encounter these forms of atheism among those who are formally Christians.

For those who are not hungry, it is easy to palaver about the degradation of charity.

What have we got here in America that we believe we cannot live without? We have the most varied and imaginative bathrooms in the world, we have kitchens with the most gimmicks, we have houses with every possible electrical gadget to save ourselves all kinds of trouble — all so that we can have leisure. Leisure, leisure, leisure! So that we don’t go mad in the leisure, we have color TV. So that there will never, never, be a moment of silence, we have radio and Muzak. We can’t stand silence, because silence includes thinking. And if we thought, we would have to face ourselves.

By conforming to the norm, you perpetuate the norm.

If you have never been hungry, you cannot know the either/or agony created by a single biscuit — either your brother gets it or you do. And if you do eat it, you know in your bones that you have stolen the food straight from his mouth. . . . This was the daily, debilitating side of poverty, . . . the perpetual scarcity that makes . . . the simplest act a moral dilemma.

The belly is the reason why man does not mistake himself for a god.

Food for all is a necessity. Food should not be a merchandise, to be bought and sold as jewels are bought and sold by those who have the money to buy. Food is a human necessity, like water and air, and it should be available.

Maybe the technologists are right; maybe they can create conditions that will support ten billion people on planet Earth, or even more. . . . It might be possible, for example, to farm the entire land surface and the oceans, too. . . . We could process sewage into bouillon cubes, eat algae, seaweed, plankton. All those things are theoretically possible. But . . . it seems like it would be a wretched world to live in — billions of humans packed into some sort of planetary food factory. Buckminster Fuller thought it could be done. But the question is, Should it be done? Who would want to live in such an ugly world?

Bread that must be sliced with an ax is bread that is too nourishing.

All we ask, oh Lord, is to be safe from the rain, to be just warm enough in winter to watch the snow with a smile, to have enough to eat so that our hunger will not turn us to angry beasts.

How wonderful it is that nobody need wait a single moment before starting to improve the world.

The worst sin toward our fellow creatures is not to hate them, but to be indifferent to them.

It isn’t enough for your heart to break, because everybody’s heart is broken now. 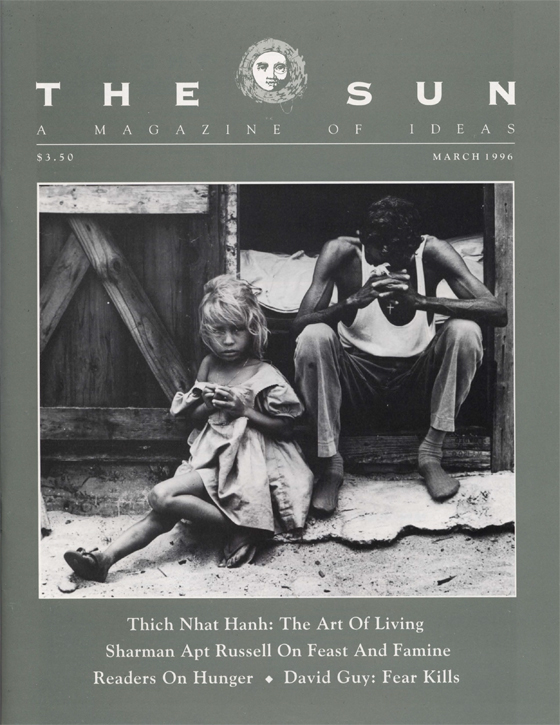