Fish leaping free of water, powerful and graceful and aloft. I’ve seen it on the ocean, in lakes, in rivers, in streams, estuaries, ponds, fish tanks. Beautiful to us, like catching sight of a falling star, maybe more so, because we know gravity and so few of us explode from it. The leap into the air is ballet. But to go from water to air? It’s like one of us launching into the clouds (or farther) using only our body for propulsion. But the leap is for oxygen, or to evade a larger fish, menacing and hungry and capable of ripping the life from its prey. Either way, it is survival: beautiful to us, a moment of terror for the fish. One leap may not be enough to elude the predator, and we may see a fish leaping again and again, like a skipping stone.

Were I to be pursued by some human predator, I wouldn’t know how to evade or fight. I’d very possibly not wish to do either, but just meet my predator and watch the unfolding event. Maybe this is at the root of why I don’t want children: it’s nature’s way of eliminating a weakened life force.

I am possible at only a few rare times in history, especially in this time and place, where I may go a lifetime without encountering a violent human or a human-eating animal. This is not absurd, even in America, where, if you are white and relatively intelligent and live quietly, you can circumvent entirely the vortices of violence. Many thousands of years of humans fighting for domination and survival allow me this luxury. Ancestral others paid dearly for my ease.

I went to see Bob the other night, and he was beautiful to me. His parents were there, his sister, her husband. Everyone had warned me that he’d deteriorated utterly. And it was true. Parchment skin sheathed his bones. His underlying meat was gone. He was bones and thin skin and long, sallow toenails. As Margie stroked his hair and spoke sweetly to him, I held his catheterized hand and looked into his eyes, still big and blue and beautiful and something to behold . . . more powerful than I’d ever known his eyes to be: clarity, focus, understanding. Of course, it is I, the one who is still capable of easy breath, who attributes these qualities to his startling eyes.

In deep blanketing snow, animals wither and starve for lack of food. Life is frozen out, yet we find it beautiful. 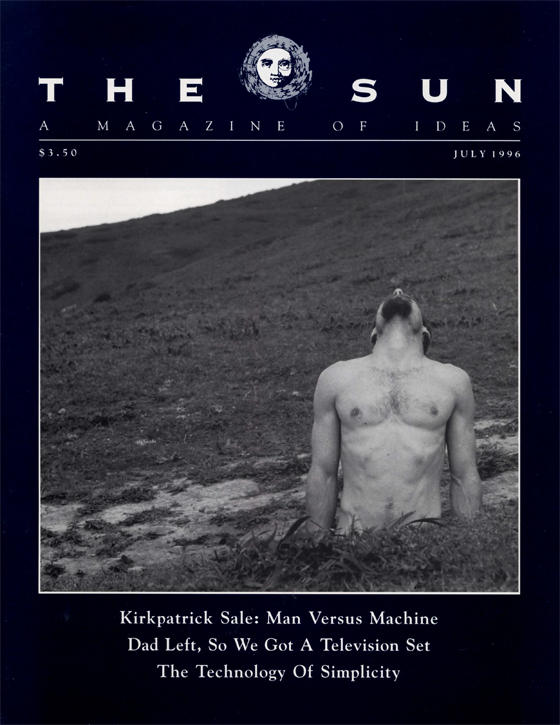 The Technology Of Simplicity

By Mark A. Burch
Photography

At The Altar Of Progress

By Kirkpatrick Sale
The Sun Interview