I’m in love with Bert. I’ve been dreaming for going on six months now about having an affair with him. Unfortunately, I’ve had to take into account the fact that Bert don’t want to, even though he thinks I’m a goddess. I reckon I am one, sort of — leastways, compared to the rest of the female population in Stillwater, Tennessee. Not that there ain’t some other good-looking women in town; it’s just that I’m the only one not affiliated with any of the churches we got, which makes me some kind of free-spirit heathen. I got a lot of spirituality in me, though. I believe you can find God in a tree or a flower just as easy as in a church. I believe you can find Him in another person, too. I’m not ashamed of my body, it being the House of my Soul. I don’t think sex is bad, either. I believe it’s one of the presents God gave us to partly make up for having to live as humans.

Bert’s real glad I feel this way; he just can’t reconcile my beliefs with his lifestyle.

Bert’s sort of a celebrity in town. There are two restaurants in Stillwater: a small one that serves mostly fried chicken and turnip greens, and a bigger one that has steak on the menu and vegetables du jour. Bert runs the bigger one. He’s got a lot of money and lives in a big, fine house. But what the general population don’t know is: Bert don’t own that restaurant — his wife does. If he were to get caught having an affair she’d divorce him in one second flat, no questions asked. Bert would lose his job, his house, his money. All he’d be left with is me, and I ain’t got two nickels.

Bert’s wife changes her clothes behind the locked door of their bathroom. Sex with her is a stiff-positioned chore that Bert says makes him feel like a rapist. It’s no wonder he fell for me that night at the restaurant when I first let loose my feelings on him. I’d been going there every Friday night for a month or so, trying to improve my social life. But instead of meeting any nice single men, I’d wind up talking to Bert. It got to where he’d ask me to come back after the restaurant closed so we could talk some more. We’d have coffee and discuss Life. There was obviously a mutual attraction from the first time we laid eyes on each other, and all that talk just added fuel to the fire. So much so that one night — right in the middle of a conversation about how people must need to really connect with other people; otherwise what was the point of our being here? — I broke down crying and told Bert how lonely I was. When he put his arm around my shoulder to comfort me, all my passionate feelings just busted loose. I threw myself into his arms and kissed his neck. I would have seduced him on the spot, but he wouldn’t let me. Bert’s a very controlled man. Even though there wasn’t nobody else around, I could feel every muscle in his body tense up. He told me straight off he couldn’t get involved in an affair, because it was wrong. Some women like to say there ain’t no decent, honest men left, but I got news for them — there’s one, at least.

Except I do get confused sometimes about what love really is. After that night, Bert asked me to keep coming back to the restaurant on Fridays after hours, even though he made it clear there definitely wasn’t gonna be no affair. I said I understood. Nowadays we still talk about Life, but mostly we just touch and kiss and stare into each other’s eyes. We can only be together for a little while, or his wife might get suspicious.

One time, Bert said, “I love you,” but I could tell it made him really nervous, and he’s never said it again. I say it all the time, but I’ve never once asked him to leave his wife, and I never will. I may be a goddess, like Bert says, but I don’t expect him to give up his solid way of life and go off and live some romantic fantasy with me. Nobody in his right mind who has actually managed to achieve the American Dream in this day and age would screw it up on purpose. And besides, Bert truly don’t want to hurt his wife. He’s got his priorities, and I respect that. Also, I’ve come to some kind of understanding with myself about what me and Bert are doing. I feel like just the fact of my loving Bert makes the whole thing worthwhile. It’s a good feeling, loving somebody with no expectations about what you’re gonna get out of it — loving somebody for no other reason except you just do.

Once in a while, I get into roundabout discussions with my girlfriends (who don’t know about me and Bert) about the right to have your needs met and the right to this and the right to that, and they always end up with the conclusion that men are all pigs who think about nothing but sex and haven’t got a clue as to what real love is. But I ask you, who does? Being of a spiritual turn, I believe all any of us human beings can do is come as close as we can to real love by making that effort to connect. You know? Trying to get as close as we possibly can to somebody else’s soul, ’cause we know that’s where the love really is. I figure the only way we can do it is by listening to our own hearts and listening back at theirs. Now, that’s real intimacy, if you ask me. Sex don’t have nothing to do with it, except for being the icing on the cake.

My girlfriends don’t think that way, though. If I was to tell them about my relationship with Bert, they’d either say I was being used and should just tell him to go to hell, or else start thinking up ways I could trick him into leaving his wife and marrying me; it would just depend on what kind of collective hormones they were having on that particular day. I could never make them understand how loving Bert somehow helps me love myself. How it nurtures my soul. They’d think I was crazy. Maybe I am. But I still feel like I know what I’m doing, even though I do get sad sometimes, and lonely.

I worry more about Bert, though. Sometimes he looks sad and lonely, too. He and his wife have been married for twenty-five years, but they ain’t never really been intimate, if you know what I mean. Bert never says so, but I think he feels trapped, trying all the time to be such a good, upstanding man. His soul must feel like it’s in jail, and I figure that’s what his real attraction is to me: I free that part of him. Maybe being stuck in a human body is always like being in some kind of prison: your insides want to fly, but your outsides won’t let you. Leastways, that’s how I feel about Bert; he’s in prison for a crime he didn’t commit.

Even though I feel real happy most of the time, I got my own prison to live in. I ain’t really a goddess, you know — that’s just something Bert likes to say. I reckon real goddesses don’t wake up in the middle of the night crying out the name of someone who ain’t there. I reckon they don’t wonder about getting their needs met. Living so high on the soul level, I reckon, real goddesses meet their own needs. All the time, I guess. I don’t know. Honest truth be told, I’m just a regular human being like everybody else. And I’m in love with Bert. 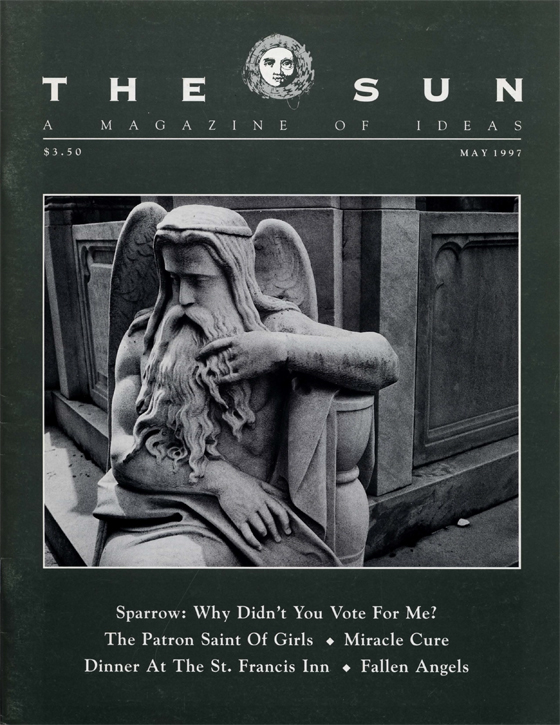 The Patron Saint Of Girls