Dirty For Dirty: The State Vs. Larry Flynt, Or All In The Bloody Eye Of The Beholder | By Sy Safransky | Issue 26 | The Sun Magazine
close

Dirty For Dirty: The State Vs. Larry Flynt, Or All In The Bloody Eye Of The Beholder

Lewis Lapham is the editor of Harper’s magazine, founded in 1850, and one of the nation’s best public affairs journals. I like Mr. Lapham; he is intelligent, and cranky, and honest. And he is free to write what he chooses, a freedom for which I, as a writer and a human being, am grateful.

How distressing, then, to read in the April issue of Harper’s Mr. Lapham’s denunciation of Larry Flynt, editor of Hustler magazine, who has been sentenced to seven to 25 years in prison for “pandering obscenity” (a misdemeanor) and “engaging in organized crime” in the national distribution of the magazine. Stiff punishment for bad taste. (The Supreme Court had ruled, in 1973, that since a national definition of obscenity could not be fairly imposed, it would have to be decided, in part, by “community standards.” The seemingly innocuous term concealed a danger. In the Hustler case, local authorities in Ohio have tried to stifle a national publication by applying their own “standards” to what you and I may read. In similar cases elsewhere in the nation, Al Goldstein, publisher of Screw magazine, was convicted in Wichita, Kansas, for sending obscene material through the mail, and Harry Reems, who starred in the film “Deep Throat,” was convicted in Memphis, Tennessee, for conspiring to transport obscene material — a print of the film — across state lines.)

Now, Mr. Lapham, recalling the First Amendment protection of freedom of speech, and of the press, nonetheless protests:

But unless I made nonsense out of the language, I couldn’t see how Mr. Flynt’s magazine qualified under the meaning of the word speech. The noun implies the adjective human. Mr. Flynt achieves his effects with the subliminal suggestions of cannibalism, homosexuality, sadism, narcissism, and homicide . . . How is it possible to construe the degradation of human beings as a constitutional right?

Hustler could be called a sex magazine, but it bears about the same relationship to sex as the Marlboro cowboy to life on the range (an analogy Mr. Lapham might consider barbed, as the inside cover of Harper’s was given over to Marlboro Lights; one wonders whether Harper’s is at all concerned about a relationship between cigarette advertising and cancer, but it is a pointless question, the pursuit of profit, no less then sex, requiring the abandonment of certain charities, and sensitivities). It isn’t sex which Hustler sells — only a prostitute can do that — but fantasies and images: stills from the cutting room floor, cameos of lust and miracle, the dirty flick of a collective projection, reel to reel, boyhood to whatever boys become. Hustler isn’t sex, but an advertisement for sex. And, like all advertisement, it must be judged, like it or not, as art.

Talk of pornography ought to begin at the modern root: advertising. Ten years ago the advertisements sold the girl with the car — the not-altogether unfair connection of the unconscious mind was that the owner of a new convertible was on the way to getting a new girl. Today the girl means less than the machine. A car is sold not because it will help one to get a girl, but because it already is a girl. The leather of its seats is worked to a near skin, the color is lipstick-pink, or a blonde’s pale-green, the tail-lights are cloacal, the rear is split like the cheeks of a drum majorette.

Whether the lipstick-pink anatomical detail of Hustler’s centerfold Honey, or the two-page Porsche/Audi ad in the middle of Harper’s — urging us, against a background of sand and ocean and fiery setting sun, to “Drive One Of Our Legends” — shall be judged art or commerce or plain pornography is left for the Supreme Court to decide. It is worth recalling that Mr. Flynt once said all he wanted to do was become a millionaire, whether by robbing a bank or publishing a magazine. The publisher of Harper’s, James A. Alcott, Mr. Lapham’s boss, has to the best of my knowledge not been so candid. But in an age when Andy Warhol’s “Campbell Soup Can With Peeling Label” fetches $60,000, when a good art collection is indistinguishable from a good investment, such comparisons are unfair, and irrelevant. To say that Hustler is an advertisement for sex is to say, simply, that it is American. As the nine august members of the Court ponder the convoluted tissue of Hustler’s Honey, perhaps they will discover this hidden seed of truth. Perhaps Mr. Lapham, leafing through his own magazine, will find the same awful subliminal suggestions that so appall him in Hustler.

After all, if obscenity is what is unnatural, and therefore, in Webster’s terms, “filthy” and “disgusting,” by whose standards shall this not be judged an obscene nation? In 1850, when Harper’s began publication, Nathaniel Hawthorne completed The Scarlet Letter, which was later condemned by a leading clergyman as a “brokerage of lust.” In 1974, the first year of Hustler, Richard Nixon resigned as President. Across the dry sands of an American century; Harper’s and Hustler face each other as twin mirrors. Larry Flynt tries to become a millionaire by sweeping up our psychic droppings — woman as goddess and whore; the Great Mother and the Death Mother; cunts with flowers and cunts with teeth — and selling it back to us for $1.95, subscriptions $18. The Porsche Turbo Carrera costs $28,000. What Nixon will get for his memoirs nobody knows.

Yet calling America obscene is as impotent a gesture as ordering one of Larry Flynt’s Love Dolls. The word, after its abuse by sloganeers in the Sixties, has all the power of Hustler’s dunghill prose. And it is, anyway, inaccurate — or, rather, accurate only as a measure of we who use it. “In the eye of the beholder” is an unvarying truth. America is a beast no more than Larry Flynt an ogre or Nixon a villain and a fool. Hustler’s Honey is a symbol of female exploitation, a girl trying to make a living, a photochemical illusion — or, if you will, a piece of ass. Photographers make objects of flowers, and nudes, and nudes with their hands between their thighs. We make objects of nations, and Presidents, and publishers — or we do not. Eye to the deep flesh mirror, to the reflection of imprisoned, breathing Spirit, we ache for our completion — or we laugh at ourselves. We imagine ourselves beautiful, or ugly; born of darkness, or light; executioner, and victim: the judge of who is human, and who must die.

We can take a Polaroid, and photograph our love, and see the results in sixty seconds. That’s Lewis on the left, and Larry in the middle, and Nathaniel sitting, and Richard looking glum in the corner; just some boys trying to make a living, humping the ghost of an improbable nation, each in their own way, as best they can. Losing their rhythm, finding it. Working to a sweat, muscles loose or pinched. Children of God, with a finger up the Mother — is it the divine play, or just another commercial? The Supreme Court will know. In the trapped light of a photograph, all will be revealed. The meaning of freedom. The space between the bars, and the sheets. The stains. Who killed Lenny Bruce. And Marilyn Monroe. And John Kennedy. Lenny, move a little closer to Marilyn, please. That’s it. Smile, everyone. Smile, dammit. Don’t you see it’s funny? 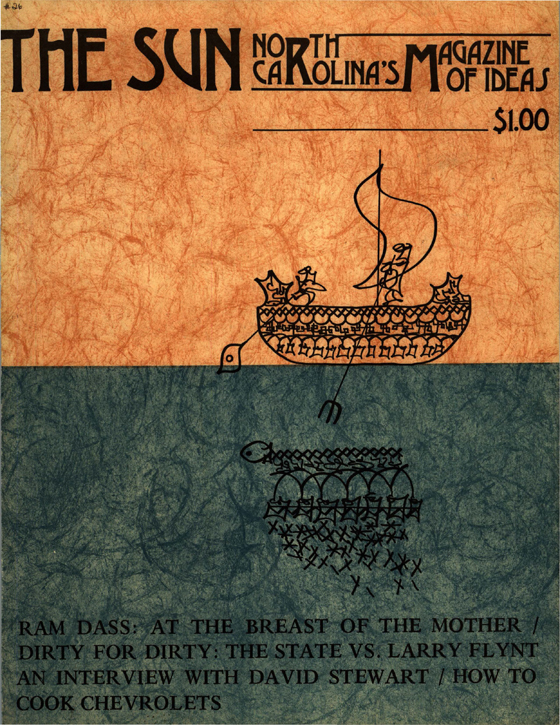 Notes From A Radical Aquarian

By Gayle Garrison
The Sun Interview

An Interview With David Stewart