The idea of a baby sucking on her breast, the way her boyfriend back in Durant had liked to do, disgusted Vanessa, but she said she would try it. Kevin didn’t seem interested — just mouthed at her soft flesh and fell asleep — although he latched on quickly to the firm bottle nipple the maternity-ward nurses offered. So Vanessa could honestly tell Mrs. Johnson that she had tried breastfeeding, but it just hadn’t worked.

Vanessa couldn’t possibly call someone so old by her first name, so she tried to avoid calling Mrs. Johnson anything at all.

A nurse rolled Kevin into the room in his little bed-on-wheels. He was wrapped up in a receiving blanket, looking like a mummy, his tiny face squeezed shut. Mrs. Johnson showed Vanessa how to change his diaper and dress him. Vanessa asked if there was something wrong with his penis. Mrs. Johnson explained about circumcision. Vanessa felt stupid and decided not to ask any more questions.

“Do you have a laundry basket or something he can sleep in until I bring you a crib?” Mrs. Johnson asked.

Vanessa said she thought the baby would just sleep in the bed with her and her mother. He wouldn’t take up much room.

“I know you would be very careful,” said Mrs. Johnson, “but one of you might roll over on him in your sleep. He’ll be better off in his own bed.”

Blood vessels arced like bolts of electricity across Kevin’s skull. “You’re going home today!” Mrs. Johnson told him. Then she said to Vanessa, “Babies need to be talked to. Go ahead — you hold him and talk to him.” Mrs. Johnson rolled Kevin up tight in his blanket again and handed him to Vanessa.

She couldn’t think of a thing to say.

Vanessa was the third of her sisters to come home with a baby, and by now her mother was tired of it. When Vanessa’s mother had moved here to Dayton, Vanessa had come with her, while the sisters and their babies had stayed in Durant with Vanessa’s grandmother. If Vanessa had known she was pregnant, she would have stayed, too.

Vanessa hadn’t been to school for months, so she was used to being alone in the apartment while her mother was out looking for work, or at one of her temporary jobs. After the cabdriver helped her carry everything in, Vanessa double-locked the door and switched on the TV, and it was as if she’d never left — except for all the boxes of Pampers and formula, and Kevin himself, asleep in the car seat Mrs. Johnson had given her.

She carried the box of formula into the kitchen and stacked the cans up on the counter, then took the empty box back to the front room. While watching a soap opera, she lined the box with blankets to make a bed for Kevin, and then waited for her mother to get home.

“This is not a baby doll, you know, Vanessa,” her mother said when she returned. “This is a real live baby, and it’s your responsibility. I’m not going to make the mistake I made with Sheila and Monica, and take care of him for you.”

Vanessa had heard all this before, and expected to hear it again, but she had hoped her mother would say something else, like that Kevin was a cute baby.

“How big is this baby? Five pounds?” Vanessa’s mother said, testing his weight in one hand. “Start feeding him cereal. You need to fatten him up.”

Vanessa told her mother that Mrs. Johnson had said not to give Kevin anything but liquid, and then went into the kitchen to make him a bottle. Vanessa didn’t understand the instructions on the formula can. Kevin was crying now, and her mother was saying, “Come get this baby. I’ve had a rough day and I need to lie down for a while.”

Vanessa put Kevin in his box and listened to him cry while she searched the pamphlets the hospital had given her for directions on how to make bottles. By the time she was done sterilizing and mixing, Kevin had fallen back asleep.

When Mrs. Johnson delivered the crib, it arrived in a lot of pieces that you needed a screwdriver to put together, and Vanessa didn’t have one. Mrs. Johnson said she would bring a screwdriver next time. “Are you feeding him every three hours?” she wanted to know.

Vanessa said yes, except at night.

“I know it sounds silly to wake up a sleeping baby in the middle of the night, but until he’s a little bigger you ought to be feeding him round-the-clock,” Mrs. Johnson said.

Vanessa started sleeping on the couch in the front room with Kevin in his box beside her so they wouldn’t disturb her mother. “You’re going to spoil that baby, getting up with him all night,” her mother said. The couch was lumpy and narrow and lonely, but Vanessa stayed where she was.

“Are you talking to him?” Mrs. Johnson asked when she brought the screwdriver.

Vanessa didn’t understand why that was important, since he couldn’t answer back, except to cry. The crying was getting on her nerves.

“When my first baby was born,” Mrs. Johnson said, “every time she cried, I cried.”

Kevin cried while Vanessa waited for his bottle to warm up, even though she was walking and bouncing him. She took the bottle out of the pan on the stove and shoved the nipple into his mouth. He choked and opened his eyes wide and then started sucking. She fed him and watched Mrs. Johnson put the crib together.

“Sometimes,” Mrs. Johnson was saying, “I felt like shaking her. But thank goodness I didn’t. You can really damage a baby’s brain by shaking it. Don’t forget to burp him.”

Vanessa put Kevin up on her shoulder and started to pound his back. Just as Mrs. Johnson was saying, “Gently,” Kevin threw up all over Vanessa’s shirt.

They left the crib in the front room because it wouldn’t fit anywhere else. Kevin looked lost in that big bed, and he didn’t seem to like sleeping in it — especially not on his back the way Mrs. Johnson said he had to, or else he might die in his sleep.

“All my babies slept on their stomachs, and none of them died,” Vanessa’s mother said.

The formula was running low, and Vanessa didn’t know what to do. If she asked her mother to buy some, her mother would say Kevin was her responsibility. But Vanessa couldn’t go to the store herself because Mrs. Johnson had said not to leave Kevin alone, and it was too cold outside to take him with her. So she started adding more water to the formula.

Mrs. Johnson looked angry when she came over and saw that the formula Vanessa was feeding Kevin was cloudy white instead of milky white. “All you had to do was call the office!” she said. “He’s never going to start gaining at this rate!” Later, after Mrs. Johnson had gone to the store and bought formula, she apologized for raising her voice.

One night, Kevin wouldn’t sleep at all. Vanessa would give him a bottle and he would fall asleep drinking it, but as soon as she put him in his crib he would throw up everything and she would have to start all over again. Finally, he fell asleep curled up like a little grub on her shoulder, so she put him back in the crib and was asleep herself the minute she lay down on the couch. She dreamed she was at a party with some of her friends in Durant, saying, “His name is Kevin, and he looks just like his daddy.” Then she was jerked awake by Kevin’s piercing shrieks.

Vanessa wanted to hit something; she wanted to hit Kevin, except he was so insulated with layers of cloth that there would be no satisfying, resounding smack, so she picked him up and shook him. His little head rattled on his shoulders and he stopped crying, and then Vanessa remembered what Mrs. Johnson had said about shaking babies.

Vanessa brought Kevin back to the couch with her, lay down with him on her chest, and gave him her index finger to suck. He felt warm between her breasts, and his tiny wet mouth pulled hard on her finger. She fell asleep listening to his shallow little breaths.

From then on, that was the way Kevin slept, day or night. During the day, Vanessa would watch her favorite TV shows through the little bit of fuzz on his head, and sometimes doze off herself.

Good job, Kevin!” Mrs. Johnson said when she weighed him in her hammock scale. “You’ve gained four ounces!” Kevin started making watery, farting noises in his diaper, so Mrs. Johnson gave him to Vanessa to change. Mrs. Johnson watched Vanessa wipe Kevin off and fit the clean diaper on nice and snug around his little tadpole legs. Afterward, Mrs. Johnson told Vanessa she had done a good job, but also said, “Talk to him while you change him.”

Vanessa still felt stupid talking to someone who couldn’t answer back — although lots of times she would argue with the people on Oprah or Sally Jesse Raphael. Her mother talked to Kevin like this: “Tell your momma you need a bath. Tell your momma you’re hungry. Tell her you want some real food.”

Later that day, Kevin smiled for the first time: first with one side of his mouth, then the other, and finally with both sides. He was breathing fast, as if it was hard work. When her mother got home, Vanessa tried to get him to do it again, but he wouldn’t. Her mother said it wasn’t a real smile anyway, only gas.

Vanessa was sorry that Kevin hadn’t smiled while Mrs. Johnson was there. She would have been happy.

The next time Mrs. Johnson came to visit she brought Vanessa a stroller. Vanessa thought it was too cold to take Kevin out in a stroller, but Mrs. Johnson said no, as long as it was above freezing she could bundle the baby up and take him out — the fresh air would be good for him.

“You’re going to make that baby sick,” her mother said.

Vanessa took Kevin for a walk anyway, and three different people told her he was cute.

She had just pulled the stroller bump-bump up the stairs and double-locked the apartment door and started peeling the layers of blankets off Kevin, who was sound asleep in the stroller, when the phone rang. Vanessa was all out of breath when she answered. It was Mrs. Johnson.

“Our agency has lost a lot of its funding, so I’m not going to be able to come see you anymore.”

Vanessa thought maybe it was because of something she had done. She remembered the time she had watered down Kevin’s formula.

“Oh, no, nothing like that,” Mrs. Johnson said. “You’re doing a great job. All our young mothers are doing a great job. It’s not because our program doesn’t work.” Mrs. Johnson laughed, but she didn’t sound very happy. “Our program works too well — maybe that’s the problem. So now they’ve decided teen mothers should leave their babies and get jobs.”

Vanessa was glad it wasn’t her fault.

“You can still call me at home, evenings or weekends, any time. Take my number down.”

Vanessa repeated the number back to Mrs. Johnson very slowly, as if she were writing it down, but really she wasn’t. She didn’t have a pen. 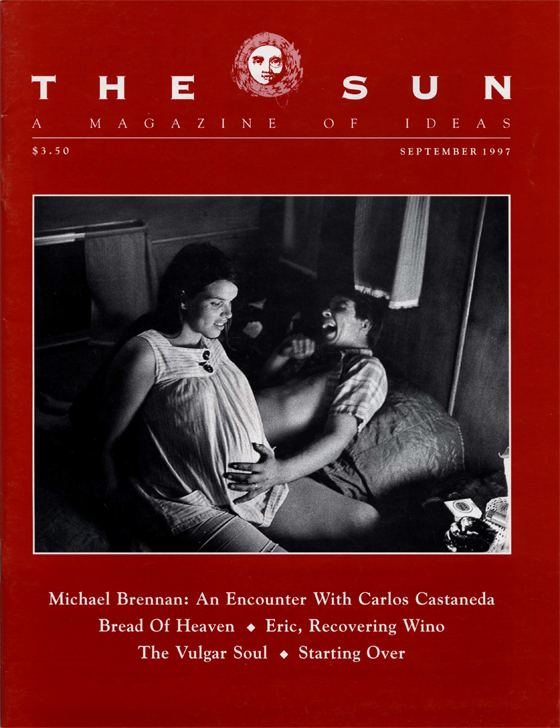