for Vecchio, his and mine

I was not home the day my grandfather Nonno died, but my brothers were, and they told me how my father had received the news. It was a couple of weeks before Christmas, and my brothers, Johnny and Peter, were visiting my father at his law office. Dad was with a client named Ernesto, an old family friend from Nonno’s hometown in Italy. My brothers were waiting in the lobby when Ernesto came flying out in a panic. “Oh, Madonna, Madonna!” he cried. “You boys, you come for your daddy!” Johnny and Peter ran into the office. My father made a noise as if he were choking. He held the phone limply in his hand, his brother Francesco on the other end.

That was last year. This holiday season I arrived home a couple of days before Christmas. I hadn’t seen anyone in my family since the funeral. I felt unable to reach my father, who had cried only once — when he got the call — and had then retreated into depression.

I’d spent many hours of my youth listening to my father’s stories about Nonno, how Dad would drive five hundred miles round trip every other weekend to spend a couple of days with his parents. I would listen to my father’s diatribes about how confused the world was today, and how my generation had no respect for its elders and no understanding of family. Although his comments were never directed specifically at me, I took them as personally as a home-cooked meal.

The morning after I arrived, he woke me early and asked if I wanted to go to the store. I was jet-lagged and snug in the bed’s warm embrace, but I surprised myself. “Give me a minute,” I said.

The previous night I’d been looking at family photographs and had found a package marked “Vecchio” — Italian for “Old Man,” a term of affection my father often used for Nonno. The package contained dozens of black-and-white photographs of my father and Nonno together on the farm in Italy. Looking through them, I was reminded of something Dad had once said to me: “You’ll never know love like the feeling of working beside your father in a tomato field.”

I was half asleep and didn’t say a word as we drove to Genonetti’s — “the Italian store,” my brothers and I had always called it. As boys we had gone there every Sunday after church with my mother and father to buy fresh bread and meat. Now my father broke the silence: “We’re making baccalà,” he said.

Baccalà is dried-and-salted cod from the old country, mixed with other ingredients to make a rich sauce. Everyone in my family had always said how good Nonno’s recipe for it was, especially before he abandoned the time-honored tradition of pounding and soaking the fish for days, and instead switched to using frozen cod. Years ago, my father had faxed me a copy of Nonno’s recipe, and for weeks thereafter, every time I’d spoken with him, he’d asked, “So, have you made it yet?” But I never had made it, and he’d finally stopped asking.

Now, when we entered Genonetti’s, I went directly to the frozen-seafood section — at least my father would know that I’d remembered what baccalà was. But when I handed him the frozen fish at the cash register, he said, “Put it back. You and I are going to do it the real way, like Nonno did.” It was the first time I’d heard him say Nonno’s name since I’d been home. Old Mrs. Genonetti, still dressed in black twenty years after her husband’s death, held up two long pieces of dried fish and said, “Ci, questa é la verita!” (“Yes, this is the real thing!”)

On the ride home, my father gave instructions on how the fish was to be hammered, the type of hammer to use, and the angle at which to hold it. I was still half asleep and feeling resentful. Why should I do this? I thought. It doesn’t have anything to do with me, yet he expects me to understand. Once home, I went straight back to bed, but was awakened shortly by the sound of my father pounding the fish in the basement.

Realizing I wasn’t going to get any sleep, I got up and emerged from the bedroom just in time to answer the front door. It was my brother Peter and his girlfriend, Donna. “What the hell is that smell?” Peter asked.

“Dad is making baccalà for Christmas dinner,” I said.

“Really?” Peter responded, surprised and, like me, not quite seeing the point.

Back upstairs, in the kitchen, my mother asked, “Did you help him?”

“You know what he’s like, Mom. He expects us to be so enthusiastic.”

She was right. She knew his pain probably better than he did, and if anyone in my family had medicine for him, it was my mother. So I returned to the basement and found my father sitting on the stairs, taking a break. I picked up the hammer and began to pound. I could feel him wanting to offer me tips on rhythm and timing, and was grateful that he didn’t say a word.

After I’d pounded for a long spell, Peter appeared at the top of the stairs. “Come on,” he called to me. “I have the videos.”

He didn’t say anything, just shrugged, his eyebrows elevated, as if to say, “Do what you have to do.”

For the next five hours, Peter and I watched The Godfather and The Godfather II, back to back. It’s a Christmas tradition for my brothers and me. I’m not sure who started it, or why, but I know it has something to do with respect for family bonds and loyalty, like the tomato fields my father referred to with such fondness. Once, my father watched the films with us. I remember he commented on a scene in The Godfather II where Michael Corleone asks his mother if Don Corleone was ever afraid of losing his family, and she says, “You always have your family.” Then Michael says, “Things are changing, Mom.” At that moment, my father pointed to the television screen and said, “That’s very true.” I was never certain whether he was agreeing with Michael or with Michael’s mother.

Somewhere near the end of the first movie, the pounding from the basement stopped. By the tragic end of The Godfather II, the fish was soaking in a vat of water.

The following evening the baccalà was on the stove. Entering the kitchen, I sensed my father was nervous.

“I don’t want to overcook it,” he admitted.

The next thing I knew, he was on the phone to his aunt in Italy. He stood over the boiling pot, frantically switching the portable phone from ear to ear as he stirred and adjusted the heat. I was talking with my mother when, all of a sudden, she lurched toward Dad. The phone was slipping from his ear and heading straight for the pot. Fortunately, he jerked around in time to send the receiver flying across the room.

A little later, Johnny and his wife, Tina, arrived with my sister Maria.

“Why does it stink like fish in here?” Maria asked.

The next morning was Christmas. We gathered in the family room to open presents. Because I am the oldest son, I suppose, my father gave me a special gift. I knew it was special because he had obviously wrapped it himself. I opened it last.

“This is something I want you to take good care of,” he said. “It’s from your Nonno.”

I unwrapped the box and opened it. Inside was my father’s white sweater, the one Nonno had given him when Dad had graduated from law school. My father had worn it only a few times, considering it too special for everyday wear. I almost began to cry, but stopped myself: I knew he hadn’t cried in a year, and I was afraid I’d start us both going. So I hugged him and said, “Thank you.” He hugged me back, hard — harder than he had ever hugged me before.

That day, as friends and relatives paraded through the house, my father kept close to the stove, clandestinely preparing the vegetables — including tomatoes from his garden — and adding the olive oil, anchovies, and a host of other ingredients kept secret by generations of Mascarins. A delicious smell occasionally wafted in from the kitchen. It was all coming together. From time to time my mother would motion with her eyes toward the kitchen, as if to say, “This is so good for him” — frustrating for us, but good for him.

Shortly after sunset, my father appeared in the family room and announced, “I think it’s ready. Andiamo mangiare!” We all dressed in our finest clothes for dinner. I wore the white sweater and sat where Nonno had presided over every Christmas meal. “Everybody get some polenta and pass your plates,” my father said as my mother came in from the kitchen with the enormous bowl of baccalà, billowing steam. My father boasted about the tomatoes from his garden. He was so proud.

Mom stood and waited beside me while Dad cleared a place for the bowl on the table. As he moved the candles over, he accidentally knocked my mother’s arm, and the bowl tipped toward me, then went over.

I remember the intense heat assaulting my legs. I shot up as the empty bowl landed on the carpet beside my chair. Instantly, Dad was on the floor, his hands on his head, staring at the spilled baccalà and repeating, “Oh, my God! Oh, my God!”

My father looked up at me, and we both began to cry at the same time. I joined him on the floor, and he pressed me against him. “Nonno, oh, Nonno,” he chanted through his tears.

Then, as though my father were in mourning at Nonno’s funeral, my siblings came and knelt around him on the discolored carpet, ignoring the sauce that soaked their pants. I looked down at my new white sweater, stained with tomatoes from my father’s garden. 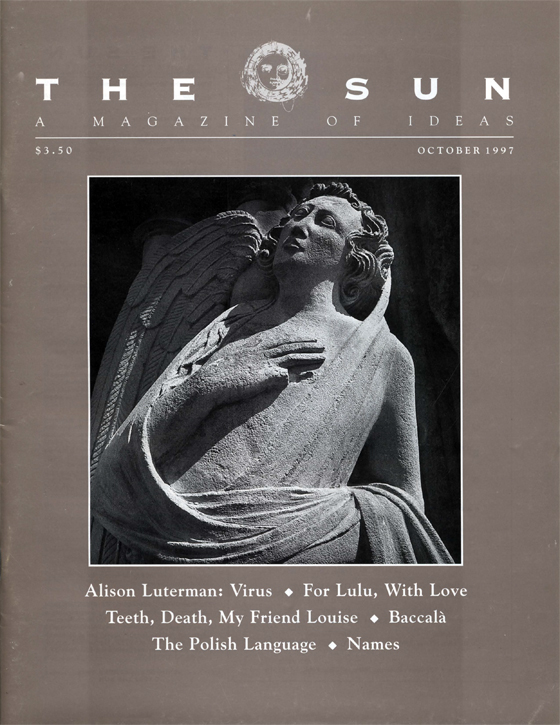