Hazel Mitchell died last summer while I was out of town. She had a massive heart attack as she sat in her recliner watching an afternoon Braves game on TV. The last words she heard, after eighty years of life, were probably “High and inside to left-handed batter Fred McGriff. Need a cool, refreshing break? Tap the Rockies: Coors Light.”

Hazel was one of the shut-ins to whom I deliver lunches every Tuesday for Friendly Neighbors. If, last summer, I’d been asked to rate the health of my clients on a scale from one to ten — one being horizontal and ten being ambulatory — Hazel would have topped the list, with an eight. She lived in a tidy, well-maintained duplex just north of the new Mormon church and west of a mammoth grocery store with one of the largest parking lots in northern Idaho. Hazel’s three rooms were always immaculate and adorned with photographs of her family, including Mr. Mitchell, who, like so many husbands, did not accompany his wife into her eighth decade. A brown-plaid afghan lay draped across the middle of her staid, colonial-style couch — old but not antique. On her kitchen island was a heaping glass bowl of Hershey’s Miniatures. I was always tempted to pocket a few, but never did.

Whenever I walked in carrying the day’s hot dish, a carton of milk, and perhaps a large peanut-butter cookie, Hazel would look up from the television with a big smile and begin to rock happily in her chair, delighted to see me. (Of course, she would have been delighted to see anybody.) I’d place the lunch on the kitchen counter, put the milk in the refrigerator, then walk back to the living room.

“How are the Braves doing, Hazel?”

“Six to one in the fifth. But I don’t like that Barry Bonds. He’s much too cocky — all those earrings.”

When there wasn’t a game on, Hazel would be watching a soap opera, or the local station that flashes the time and weather over a soundtrack of tired Eagles songs, along with a community bulletin board: “4-wheel-drive Willy’s jeep: $700 or will trade for matched team of draft horses with tack”; “Community Free University: classes include glass blowing, belly-dancing, Swedish massage, cross-country skiing, Web basics.”

“You doing OK, Hazel?” I’d ask, making eye contact and at the same time thinking about the chocolates, hoping she might tell me to help myself.

“Are you going to take a walk today?”

The client I’d have expected to find dead is John Olson. (In the event I do find a corpse, I am supposed to dial 911 and not leave the lunch.) He is the only man on my route, and I address him as Mr. Olson. He reminds me of someone my grandfather might know. Mr. Olson is a semiretired gunsmith who has lived alone for sixty years in the part of town known as the Flats, where the water table is high and the houses — many of them without concrete foundations — are low. White-haired, bespectacled, and thin as an oar, Mr. Olson sits permanently folded over in a wheelchair; he has never walked. His knees and elbows are swollen to softball proportions, and under his jeans is a colostomy bag that bulges out across his tiny waist. If he could stand up, he might be five-foot-six.

Mr. Olson’s house is as old as he is, and smells of mildew and gun oil. Rifles line a wall beneath a shelf of Reader’s Digest Condensed Books. Bags of tortilla chips spill onto a couch cluttered with gun and hunting magazines, National Rifle Association mailings, and various parts of revolvers and shotguns. By the south-facing window is a fly-tying setup with thread and feathers. Seashells cover the top of an old television, which is never on when I visit. (I once asked if he’d collected the shells himself, and he said no, he’d bought them at a yard sale — but he had seen the ocean once.) The only photograph in the room is a framed black-and-white of either Mr. Olson’s father or Harry S. Truman; I can’t tell which.

In both his gunsmith trade and his fly-tying hobby, Mr. Olson uses a number of sharp instruments — which is dangerous, because he’s a hemophiliac. I bend down the sharp edges of the aluminum lunch tray, just in case, and warn, “Be careful of the corners.”

“I am, I am,” he replies, annoyed, reaching for the tray. I hate when this happens because I’ve been taught not to annoy older people, especially men my grandfather might know.

On sunny days I stand in his doorway, and we talk for a good ten minutes about the weather, trips we’d like to take (I want to go to Tuscany; he wants to go to Australia), local moose sightings, the decline of society in general (a favorite topic for both of us), and his step-grandfather, Will Head, whom Mr. Olson quotes frequently: “He once said, ‘You can learn something every day of your life — and if you don’t believe me, I’ll prove you’re an idiot.’ ” Mr. Olson often reminds me that he is a fifth cousin of Robert E. Lee, and that his mother’s family traces its roots clear back to English royalty: “That’s where I got this damned hemophilia.” No matter what topic we discuss, he wraps up the conversation by saying, “Well, that’s just the way it is. Yes, sir, that’s all you can do.” And he is exactly, positively right.

When Mr. Olson had back-to-back surgeries last summer — hernia and gallbladder — I paid him a visit in the hospital. He didn’t seem very happy to see me, and I found it odd to see him in bed, curled up in the same position he assumed in his wheelchair. We were both out of our element.

“Is there anything I can bring you from the outside world?” I asked. “Magazines or books?”

He looked away for a full two minutes, and I stood there stupidly, my question hanging in the air. Finally, he said sharply, “A million bucks wouldn’t be bad!”

I won’t tell you about all my shut-ins, but I have to mention Clara, who patrols her immaculately kept yard like a watchdog, taking sips of whiskey from a china teacup and shaking her tiny head in astonishment at the height of the maples, as if she’d just now noticed they are more than a hundred feet tall. “Do you cut trees, too?” she asks me.

And then there’s Irene, who gets two lunches because she receives only eleven dollars a month in food stamps, and who is rumored to have had seven terrible marriages. Husband number seven, I’m told, intentionally drove their pickup into a tree — with Irene in the passenger seat. Her mouth was damaged so badly that I can hardly understand a word she says. Until recently, she was attended by a flirty aide with a rose tattoo above her left breast, who once made a disparaging remark to me about the number of lesbians in this town. The aide abruptly left to study welding in Yakima. “When will she come back?” Irene asks me every time I see her.

Elaine watches the Weather Channel exclusively and, since her stroke, has trouble speaking even a word or two. She has a yappy poodle — the kind of hyper little dog that coyotes and owls like to snatch from front lawns around here. Even so, I always make sure to pet the dog, because Elaine can barely lift her hand to her mouth, and all dogs need affection and a kind word.

Opal lives with her fifty-year-old son, Terry, who’s never uttered a word to me, and who chain-smokes Kools around Opal, even when she has a chest cold. The only time he doesn’t smoke is when he’s hooked up to his oxygen. The whole scene reeks of a Raymond Carver story in which the mother outlives the son. The edges of their lives are crumbling around them hour by hour in a haze of cigarette smoke and a rising mound of clutter. Outside is the insidious Northwest drizzle — which, by the way, is not a charming ambience to grow old in. Together, they watch All My Children with the volume turned up so high I have to shout hello. Still, Opal’s smile could melt permafrost, and now, with Hazel gone, she’s the only one on my route who asks how I am.

LaVonne, who’s new to the lunch program, grabs my hand and says she never ordered any food. Last week I walked in right after she had come out of the shower, her hair wet, uncombed, and sticking straight out, as if from five hundred volts of electricity. She took my hand as always and said, “Look at me. I look like a witch!” She sure did.

I think it was Mae West who said, “Aging is not for the faint of heart.” Having just turned forty-one, I don’t feel as invincible as I once did. In front of the mirror is not my favorite place to hang out, and it takes me ten minutes to run a mile. All kinds of unpleasant, invasive procedures have become part of my annual physical. I nap more and more. Hair disappears from my forehead and reappears in my ears. The kids at the university look much too young, and fifty no longer seems so old.

After Hazel died, I decided I didn’t ever want to leave town and miss my shift again. Somehow I associate my absence with her heart attack. I keep picturing her alone in her chair with the television flashing the score. I want to be around to spend those few precious minutes with my clients, standing in the doorways of their houses and subsidized apartments, smiling, making eye contact and small talk, reassuring them that they are not forgotten. 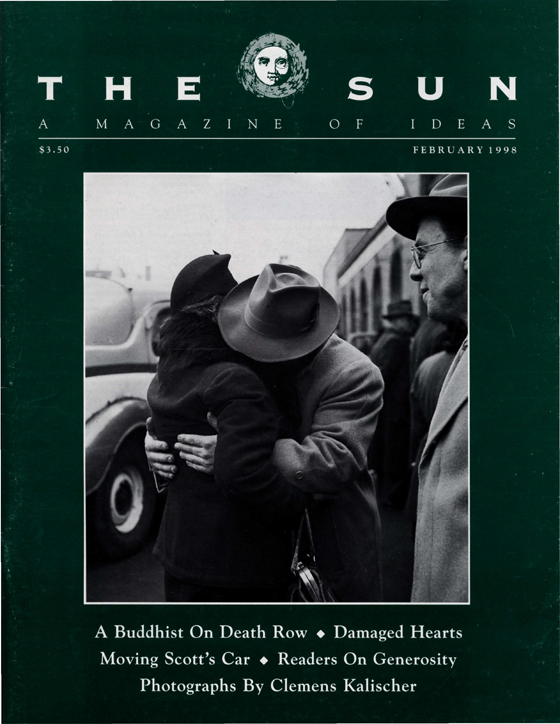