When He Had It On

The videotape began with a Japanese family standing in front of the Statue of Liberty. I’d never seen them before. There was a mother, a son, and a daughter. The father, I assumed, was behind the camera. They had on all the gear: Big Apple T-shirts, Yankees hats, Nikon necklaces. They smiled, waved at the camera, stopped, then waved some more. They pointed at the statue behind them with goofy looks of surprise, as if they’d just now noticed it. They nodded their heads continually, cracking jokes in Japanese. Standing in front of my television, still holding the rest of my mail, I was jealous of them.

The videotape was unlabeled. I had no idea what else was on it, or why my brother had sent it to me. His handwriting on the mysterious envelope was enough to tell me something was up. My brother was a drunk, no matter how hard he tried to sober up, carrying around his AA book, going to shrinks, taking Ritalin and Prozac. When his efforts inevitably failed, he ended up in police stations, emergency rooms, court-ordered rehabs, halfway houses. Then he’d stay sober — until the next time. Now was one of those next times.

On screen, the family was still joking and having fun. The small boy jumped in front of the other two and assumed a wide super-hero stance, fists on hips. Then he stood very straight and stuck his arm in the air, holding an imaginary torch. The father did some fancy camera work, panning between the boy and the statue.

I promise you will never see a videotape of my family standing in front of some landmark, waving at the camera. If you did, you’d be able to see right through our forced smiles, our distant gazes directed anywhere but at the lens. Our guilt would be obvious. We’re actually innocent of any great wrongdoing, but we’ve convicted ourselves for stupid things: the ping-pong match my brother didn’t win a single point in; the phone conversation with him that I cut short — anything will do. Perhaps that night I got a little too drunk with my friends and, while they filled in some blanks for me the next morning, I thought of my brother at an AA meeting. They were chuckling, and I wanted to tell them it was nothing to laugh about, but instead I kept my mouth shut, tucked the remark under my tongue until it dissolved to just a chalky reminder. Then I began to joke, too.

After the Statue of Liberty, the Japanese family took a taxi uptown. The father filmed everything out his window: storefronts, street lights, New Yorkers. The cabdriver tried to charge him extra for this. I put my mail down but continued to stand, watching and waiting. The Japanese family’s vacation had to end at some point.

My brother had just quit his job because, he said, he’d been getting prank phone calls for the past two months. “They” knew about him, he said. He was certain the strange voice that woke him up at night had been hired by another lawyer at his firm. They were trying to snuff him out, make him crack, make him drink. Then he had disappeared.

He’d been missing a month when the tape arrived. I was relieved to know he was alive, but worried about what he’d gotten himself into, and about the Japanese family. I could have fast-forwarded the tape, but I didn’t. I was in no rush to discover what would surely become another bad memory I couldn’t will away. Like the one in the emergency room. Cuffed and flanked by cops, he pleaded his defense in a voice far from reality, with words that didn’t go together. The ears with pistols didn’t listen; the eyes with insurance forms tried not to stare; the mouths with white jackets asked questions only when they were ready. (Where was I when all this was happening?)

The Japanese father had a sense of humor. When the taxi pulled up to their hotel, he focused in on the meter before turning off the camera. The screen went blank for a second, then it flickered, and the Japanese family was back, wearing terry-cloth robes from the hotel. The girl had a towel wrapped around her head. Suitcases were open on the beds. A staged pillow fight broke out. Even though it was plainly all for the camera, they seemed to enjoy it. The girl’s towel was knocked off her head, and the boy’s robe came untied, showing his cartoon underwear. They yelled and screamed and flung pillows at each other.

I slid the ottoman over to where I was standing and sat down. Somewhere along the way, I’ve laminated myself so that emotions just slide off me. When my brother once talked about suicide, I found the idea almost appealing. But then I saw a movie about an alcoholic, and at the end I cried anyway. Outside, in the circle of light under the lamppost, I did my best to conceal what had happened by making fun of the movie. But the woman I was with knew about my brother, and I think she was disappointed that I wouldn’t share my emotions. I could tell by her eyes that, mostly, she felt sorry for me.

After the pillow fight the tape momentarily went blank. When it came back on, I saw my brother’s image on the screen. He looked good. His shirt was tucked in; he was wearing a belt; he had even shaved. He was wearing his Walkman though — something he did only when he was drunk. He thought I didn’t know about his Walkman routine. He had a dumb smirk on his face, as if he were putting one over on me.

He was standing somewhere in Kennedy Airport with a woman who might have been attractive if she hadn’t been such an obvious drunk. She was skinny, with no muscle, and her skin was prematurely aged, her smile empty. She and my brother were standing next to each other and taking turns speaking, their voices barely audible. I turned up the volume and heard my brother say, “. . . in sickness and in health.”

They actually had a minister. He was probably the inspiration for the whole thing. Maybe my brother had seen him walk by whatever smoky airport lounge they’d been sitting in, and had chased him down. The minister, no doubt weary of performing such ceremonies, must have seen it either as his God-given duty, or as a fun story to tell during his flight. He may have been drunk himself.

And so, in the International Terminal of Kennedy Airport, my brother and my new sister-in-law were wed. The little Japanese boy was the best man. He did a wonderful job; had they exchanged rings, he would not have missed his cue. The girl who’d worn the towel on her head made a stunning bridesmaid in her Mickey Mouse sweat suit. The man behind the camera probably believed my brother would actually send him a copy of the tape.

My father says the wedding will never stand up in court, but I should save the tape, just in case. I watch it from time to time — not the wedding, but everything else. I laugh with the Japanese family in front of the Statue of Liberty. I stare out the cab’s window and bask in the mystique of a foreign city. I slip into a terry-cloth robe and swing a pillow wildly, all the while resting my finger on the remote control, ready to push STOP just before my brother appears. 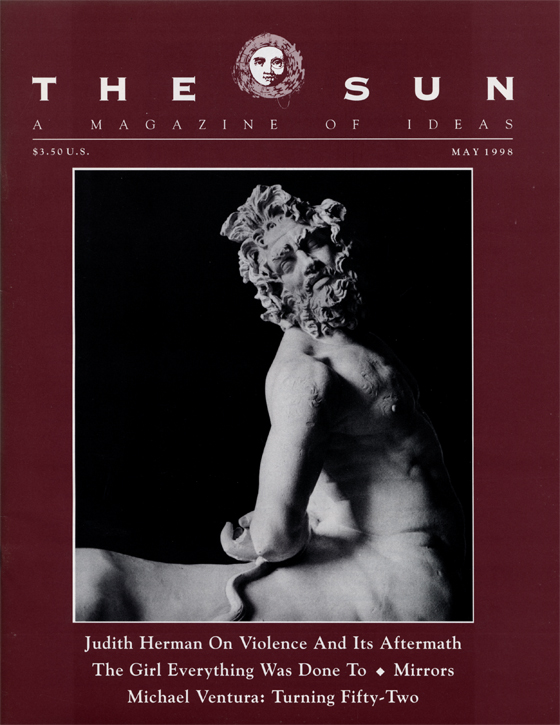 Out Of The Ashes: Violence And Its Aftermath

An Interview With Judith Herman

The Girl Everything Was Done To