Blowing It In Idaho | By Stephen J. Lyons | Issue 270 | The Sun Magazine
close

Blowing It In Idaho

It’s 6 P.M., wine hour at the Hotel McCall in central Idaho. I grab a bowl of tortilla chips and a glass of chardonnay and stake out a spot on the back patio overlooking Payette Lake. A seaplane circles and dips over the silvery blue whitecaps. The lake is bathed in gauzy autumnal light. No postcard, no poem, no million-dollar advertising campaign can convey this quality of light and shadow and dusky color.

Tourism is down this time of year in McCall. Boats lie in dry dock. Cafes close early. The streets are deserted — except for the locals, who emerge smiling to briefly reclaim their territory. They proudly display bumper stickers that say, “Welcome to Idaho. Now Go Home,” “Native of Idaho,” and “Idaho Is What America Was.” I came to northern Idaho eleven years ago and stayed mostly for the landscape and the light, and because I don’t know where to go from here.

A couple sits down and obscures my view of the lake; I have to look directly between them to see the water. I guess their age at mid to late twenties. Neither wears a wedding ring, so I imagine a romance still in that dreamy stage of denial, each participant concealing any disconcerting baggage or irritating tendencies, like drinking milk directly from the carton, or not replacing the toilet-paper roll. I know that stage well. It lasts about a month and is followed by a stage of relief, a stage of loss, then a stage of dread.

While the man fetches two glasses of wine, the woman moves his empty seat closer and hikes her short skirt up two inches past her knees, releasing millions of pheromones across the state. Somewhere a stallion whinnies. I forget about the lake.

The woman’s bra shows through her white blouse. I can see the outline of a nipple. Her dark hair is pulled back like a ballerina’s and held in place with a sterling, silver clip. Sheer stockings cover her thin, shapely legs. Earrings dangle and graze the tops of her shoulders. The straps of her leather sandals twist up her ankles like snakes. Tonight, she is as pretty as she will ever be in this short lifetime. And tonight she would like the man she is with to be sweet on her and make love to her in the most tender way imaginable.

The man returns with two full glasses of pale amber wine. He sits and scoots his chair back to its original position to give himself more leg room. The woman pulls her skirt back down and looks sourly at him. He doesn’t notice. He wears hemmed khaki shorts with a belt, and a blue-and-white-striped shirt, like the Beach Boys used to wear. They open books — big, thick paperbacks, the kind you buy on impulse in checkout lines and read in the bathtub. He places his free hand in her lap, where treasures lie. I know what that feels like, that warmth coming up through the material. The furnace. Worthy goal of all mammals.

Payette Lake’s color is softer now, impossibly soft, like an Impressionist watercolor. The plane is a speck in the distance. The temperature suddenly drops. The hotel windows rattle from the vibrations of logging trucks gearing down to make the ninety-degree turn onto Main Street. The woman shuts her pulp novel, sips her wine, and begins talking. “It’s always going to be like this. I’ll never be satisfied!” Her companion swallows a yawn and nods politely. Suddenly I’m tired, too. She continues “ ‘Lou,’ I said, ‘stop it! Go away! We’re going to McCall and that’s all there is to it.’ ” She crosses her legs — not a good sign. I wonder who Lou is: Boss? Boyfriend? Stepfather?

Shadows lengthen across the water as dusk sets in. The plane is gone, but I can still hear the logging trucks, removing America’s forests, tree by tree. I think of Gary Snyder’s description: “the work of wrecking the world.” The aspens and brush along the shore are beginning to turn yellow. The mountain air is chilly, but still hints at summer. The man’s book must be six hundred pages long. The title is printed in ashy, embossed letters. He’s barely paying attention to the woman’s conversation, to the lake, to the subtle shift in seasons. He is oblivious to her romantic overtures in this, one of the most romantic places in North America, and I want to kick him for it. She should dump him, lose the makeup and the nylons, release her tight hair, and wear cowboy boots and vintage skirts; get a large male dog with a nasty disposition; learn to play the piano; move up the highway to Lake City or Donnelly, to a cabin behind the taxidermist’s shop; grow sweetly eccentric and talk to herself all the time. I want her to hunt elk with a bow and arrow, come down from the mountains into town only once a year to sell pelts and handmade quilts, bathe exclusively in hot springs, and slowly, in the time it takes to grow a hundred-foot cedar, forget these foolish men who bring her to these sacred places and then die.

The man holds up his book as if it were an Idaho garnet, turns it over and over in his hands. He explains the plot: espionage, illicit sex, political machinations, and Middle Eastern terrorists. It takes him — I look at my watch — two minutes and seventeen seconds. The woman feigns interest and looks to the lake, which is now the color of coal. She is contemplating her options.

A flock of silent mallards skims low, and the first bats flutter out. In a moment the couple will disappear into the warm, glowing belly of the hotel, where they may or may not make love. So much depends on the man’s attentiveness, and so far he is blowing it. I know more than a little something about that myself.

I’ve reached middle age a seasoned veteran of romantic conflicts. I’ve inflicted hurt with the best of them and, more importantly, been knocked down to size a few times myself. I’m nobody special in this regard. Unless you live in a monastery or a convent, you arrive in your forties with similar scars. Say it’s the heart that’s been hurt, if you like, but the damage is more widespread. You feel it in your cells, in the follicles of your hair.

I have walked away from love in favor of lust and selfishness. I have left a lover who begged me with every fiber of her being not to go. I have said things in anger that cannot be taken back with flowers, apologies, or even the distance of decades. In turn, women have hit me, thrown frying pans at my head, threatened suicide, stalked me like serial killers, and demanded that I pay for their counseling after the breakup.

Maybe it’s a result of age, or of finally marrying the right woman, or of having a cast-iron skillet fly past my skull, but I now realize how precious the connection is between a man and a woman — and how fleeting life is in general, much like this short time in fall, before Idaho’s first snow. I want to ask the young man seated in front of me, How many opportunities do you think you will have in this lifetime to watch the lake turn colors in this season between seasons? Five? A dozen, at most? How many women will ever want you the way she wants you right now, at this moment? Why are you reading at a time like this?

The long shadows fall across the patio, bringing with them the chill of early evening. Chairs scrape the concrete. The man and woman rise and walk toward the golden light of the hotel. Her tight hair has come undone. His shorts are wrinkled in front. Upstairs, a warm room with quilts on the bed awaits them. Fluffy pillows. Soft lamplight. Cool sheets. Cabin lights begin to blink on across the lake. The intervals between logging trucks lengthen until the destruction grinds to a temporary halt. Stars and planets appear in the clear sky. The sounds of night take over. I could sit here until dawn, listening for coyotes. Precious. Fleeting. Every bit of it. 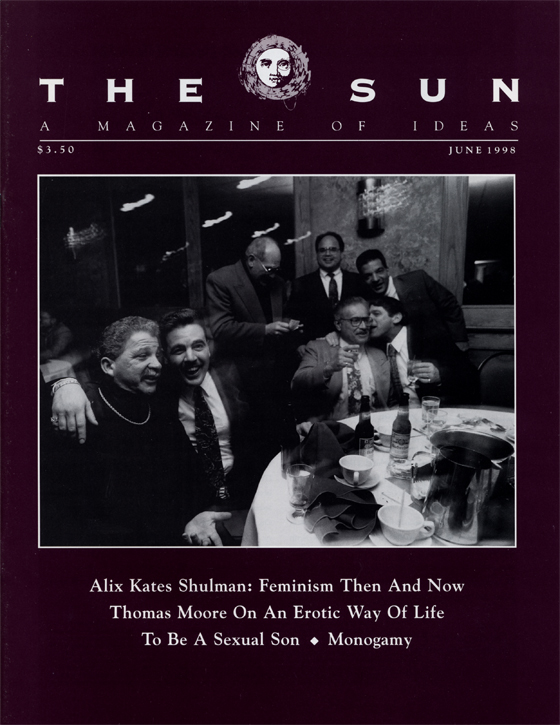 The Hunt And The Kill