On Sunday, Josselyn has promised herself, she will unpack. But on Sunday she’s hung over and depressed, and it’s at least a hundred degrees in the apartment. The living-room windows are painted shut. She manages to crack the bathroom window.

“It’s me,” she tells Kevin’s machine. “Please bring my oscillating fan to Earl’s Pub between four and seven today, or as soon as you can. After seven I’m there, and, honey, I am the last person you want to see.”

At the supermarket, Josselyn furtively slips a box of Triscuits and a wedge of brie into her backpack, then slinks into the produce aisle. The produce is banked against a mirror; she looks into it and fluffs her hair, which is dirty, but it always look better when it’s dirty. She is beautiful, she thinks, and Kevin is a piece of shit.

A supermaket guy is spraying the produce with water. Fruit smells mingle in the lingering moisture. Skins glisten. Lettuces unfold like roses. The nectarines are flushed as cheeks. The supermarket guy is watching her, so she makes a show of choosing a honeydew melon from a sale bin. Back at the apartment, Josselyn tears through boxes for utensils, cuts a slice of melon, and scrapes the seeds into the kitchen sink. The melon is unripe, the color of the moon. Swearing, she lobs it at the jumble of accumulated garbage bags in a corner of the kitchen.

In two weeks it has turned into September, and no fan yet. The first cool day, Josselyn has promised herself, she will unpack. She comes in late for her shift at Earl’s Pub because she couldn’t bear to get out of the shower, but Earl doesn’t even notice.

Earl’s is a folk bar, dark and cramped, and packed tonight for the open-mike show. Josselyn spots Theo, an untidy, thirtyish open-mike regular, and greets him, “Leinenkugel’s and a shot of Cuervo, right?”

When she brings the drinks, Theo says shyly, “Thank you, cocktail waitress.”

Theo clears his throat elaborately. “Will you smile at me, cocktail waitress, if I dedicate a song to you?” His belly and thighs stretch the creases out of his khaki shorts. He blinks up at her.

When his turn at the mike comes, Theo dedicates the song “Catey Kline” to her, changing the words to “Cocktail Kline.” Drinks accumulate on the bar mat while Josselyn listens; Earl snaps at her: “Hustle some butt, Jessica.” Afterward, she gives Theo a free beer.

“Oh, it was nothing,” he says, nestling his guitar inside its plastic case. “It is an honor to pay homage to such beauty.” He meets her eyes for an instant, then blinks. Two quarters on his table sparkle under a spotlight, dazzling her.

The next day at noon, Josselyn meets Theo at Morse Beach. She wears a miniskirt and a T-shirt; she would have worn a bathing suit, but she fell when she was drunk and there’s a bruise. He wears sandals, shorts, a button-down shirt. He shambles across the sand behind her, swinging his guitar case. They settle down close to the water, where the tide nudges a dead fish against a rusty can.

Sitting cross-legged on his towel, Theo sings a few songs in a quiet voice, barely stroking the guitar strings. He might have been singing her to sleep. She holds herself and rocks, watching his hands. The strip of sand between them is a hot, bright barrier. Josselyn lowers her eyelids, and two tears splinter her vision.

“No, that was so beautiful,” she says. “I was thinking of my ex-boyfriend, is all.”

“He’s a complete asshole, but I miss him. I moved out like a month ago. I wanted to go back to New York — I’m from there, originally — but I didn’t have the money. I’m just down the street from Earl’s now; I have this really cheap, ugly studio.”

Theo watches her face as she speaks. He continues to watch her after she has finished. Then he says, “Ah,” and glances his fingertips across the strings. “Look,” he says, nodding at the green-gray expanse of Lake Michigan. “You can see the curvature of the planet.”

Up close, Theo’s skin appears oily, and his lips are cracked. In the instant before he kisses her, she thinks how Kevin used to tell her not to give money to bums. “They’re lucky just to look at you,” he’d say. She bets that Theo has never kissed such a pretty girl. His hand is gentle on her cheek. His thumb caresses her closed eye.

When Theo shuffles into Earl’s just before last call, Josselyn’s heart races; still, at first she dodges his eye. Yesterday he looked chubby to her; tonight he looks cuddly. She sidles over to where he stands at the bar and says, “Buy you a drink, sailor?”

“Come on,” she coaxes, then calls out, “Ordering! Cuervo up.”

Earl pours slowly, and surface tension swells the golden liquid in a tiny hemisphere inside the rim of the shot glass. Josselyn thinks of Lake Michigan, imagines the world turning. Chicago lies as tranquil on the body of the earth as a lover on the body of a lover.

Josselyn apologizes for her stuffy, messy apartment. “It’s too hot to unpack, and my ex-boyfriend is holding my fan hostage. I unpack stuff as I need it, like dishes or clothes. I’m almost out of dishes, they’re all festering in the sink.”

Josselyn can smell it, too. “I should take out my garbage, I guess.”

She lights a candle. They get high and listen to Satie, swigging from a warm forty-ounce bottle of Michelob. They hold hands. Theo looks into the candle flame and says, “It’s your inner light.”

“Ha,” says Josselyn. She points toward the open bathroom door. “That bulb over the sink, OK? Which was burned out when I got here? That’s my inner light.”

Josselyn doesn’t know. She wants him to kiss her. She remembers how his lips felt, dry and scratchy. She remembers he smelled salty, too, the kind of salty she craves when she’s getting her period. The inside of his mouth was soft and wet like any mouth. “Mouths are good,” she says.

This time when he kisses her, she doesn’t think of Kevin. Her condoms have little nodules on them; “for Her pleasure,” says the box, which for some reason embarrasses her. She hardly feels them, though, when he’s inside her. She feels him inside her.

Theo gets dressed very early in the morning. Josselyn says, “You’re not leaving, are you?”

She dreams he has left her, a bad dream.

She is awakened by the buzzer. “Shit, who is it?” she groans into the intercom.

He is carrying something when she opens the door, lets it clunk to the ground, and they hold each other hard. Then he says, “For you,” and stoops to pick up an oscillating fan.

She knows she doesn’t deserve it, already twenty-five and still hasn’t finished college, she shoplifts, drinks too much, and, honestly, in the scheme of things, she’s not even that beautiful. Theo doesn’t seem to notice, but then, he hardly knows her. He’s plugging in the fan. Now the air is lively around them, ebbs and flows with a noise like the tide. He pulls his clothes off, saying he can’t bear to be dressed while she is naked. His sweat dries, leaving on his skin the faintest encrustation of salt, which Josselyn licks. She feels as if they are making love underwater, as if they might drift, in this cool, lapping current, endlessly around the watery earth.

Later, he helps her to unpack. They nail up some posters, arrange her perfume samples on the windowsill, alphabetize her books. He volunteers to take out the garbage while she does the dishes. The musty melon smell lingers. The sink is half empty when Theo comes back, rubbing his hands on his shorts, and says, “I had a little accident on the stairs. Bag broke. Where do you keep your garbage bags?”

“Where do I keep them? I swiped a few from Earl’s last week and I think they’re just kind of in the corner with the garbage there, if that’s what you mean.”

“Of course,” Theo says, and flaps a bag open; the plastic snaps like a sail.

He leaves the door ajar. Josselyn washes the remaining dishes. As they dry on a towel, she sponges out the sink, and notices what look like sprouts clogging the metal strainer basket in the drain. She draws a sprout through the strainer: vivid white and crisp, it tapers to cilia at one end and blossoms at the other into a spring-bright leaf. Clinging to the leaf is a hard little envelope, the bone-colored husk of a melon seed. A tangle of melon vines twines through the metal strainer basket in Josselyn’s kitchen sink. This seems wonderful to her, and when Theo puffs upstairs after the last bag of garbage, she says, “Theo. Look.” 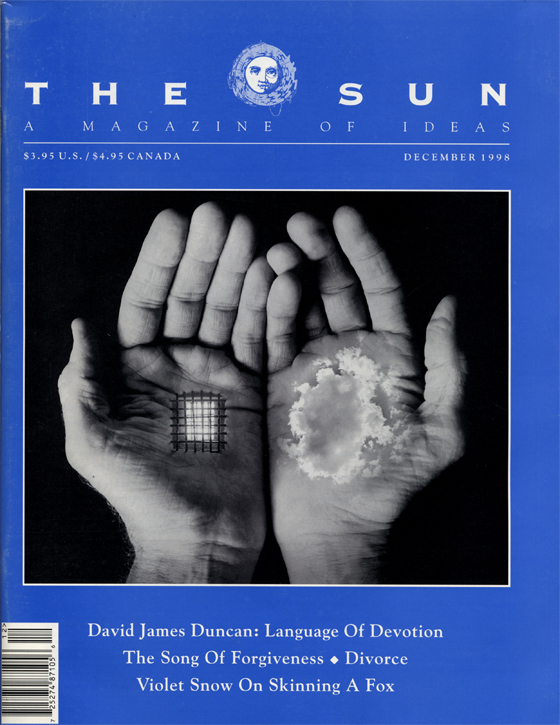 Who Owns The West?

The Song Of Forgiveness