An overnight package arrives from my mother in Illinois. Inside are fresh biscotti, sinfully rich chocolate-chip cookies, mint-flavored coffee, and the sports sections from various Chicago-area newspapers. All this I was expecting. What surprises me is a small bundle of items from my childhood, seemingly chosen to remind me of home, a place I fled twenty-five years ago to head west with the goal of building my own life.

How did my mother decide upon these mementos?

A seventh-grade report card, titled “Report of Pupil Progress,” from Chicago’s DeWitt Clinton Grade School. That year, 1968, I missed six and a half days of school (incredibly, I received no Tardies), acquired twenty crimson check marks indicating “need for improvement,” and somehow managed to flunk music. Under the category “Character Traits That Contribute to Success,” I was flagged for inadequate performance of the following: “Observes school rules and regulations, exercises self-control, does homework assignments, works independently, and is not easily distracted.” Apparently, in the opinion of the Chicago Public School District, I wasn’t likely to amount to much. At the bottom of the report card is one last check mark, registering that, despite my character flaws and below-average penmanship, I was promoted to eighth grade.

I am a product of twelve years of public education conducted in hot, stuffy warrens where the chalkboards lifted up to reveal cloakrooms. (In at least one fourth-grade class, those cloakrooms doubled as detention centers; I was once placed behind the chalkboard in absolute darkness for twenty horrifying minutes.) The pockmarked oak desks opened on top to provide space for books, pencils, rulers, and gum erasers — and, for this daydreamer, a transistor radio with a wire that snaked up my sleeve to a tiny speaker in my ear. As early as March, I would tune out the teacher and tune in to the White Sox spring-training games from Sarasota, Florida. While the smartest kids sat regally in the front rows, I always sat toward the back, where I would gaze out the tall windows at the Illinois Central trains that clattered by every ten minutes. At the end of those long days, I would run home and rendezvous with my friends in the alleys to play hide-and-seek, kick-the-can, and war games using sawed-off hockey sticks for guns.

My mother was a single parent — a role I, too, would play years later — so my brother, David, and I had little adult supervision. The wooden back porches and the dimly lit passageways between the apartment buildings of Chicago’s South Side were as much my home as the cramped and humid apartment where we ate and slept. Basements and rooftops were my parks and playgrounds. Lessons came fast, and sometimes violently. Once, an older boy urged me to yell, “You dirty Jew!” — words that I didn’t understand. I shouted the phrase up and down the alley until a tearful woman came running down three flights of stairs to slap my face, hard. My cheek can still recall the sting. That woman did me the ultimate favor. Years later, my mother would marry a Jew and convert from Catholicism to Judaism. I would attend high school in a neighborhood of Holocaust survivors, and nearly all my friends would be Jewish.

Maybe the assessment on this report card was correct. Maybe I haven’t amounted to much. (Writers seldom do, unless they write Hollywood scripts.) I am still easily distracted. But musically I am an above-average guitar player with a decent singing voice, and I have learned, after getting fired from a couple of jobs, to exercise self-control.

Beneath the report card is a yellowed Chicago Sun-Times from Thursday, October 16, 1958, the final horse-racing edition. Forty years ago, the newspaper cost seven cents. I was just two months shy of turning three when this paper hit the stands. The headlines are “Fire Destroys Palmer House Dining Room” and “1st Spaceship Unveiled; Nixon Hails Lead of U.S.”

That “first spaceship,” unveiled by Vice President Nixon, was the X-15, designed to reach altitudes of 150 miles and speeds of up to 4,500 miles per hour. The newspaper called the X-15 “this nation’s gleaming hope for putting a man into space ahead of Russia.” One friend in my South Side neighborhood had rockets, too. He would launch them from a vacant lot by Tanenbaum’s Drugstore. His astronauts were cockroaches and, once, a distressed hamster. We dreamed of landing the first insect on the moon, but the rockets never cleared the third-story rooftops of our block.

As a kid I never read the front page of the Sun-Times. I skipped straight to the back, where the sports news began. On that same day in 1958, Casey Stengel had just signed a two-year contract as manager of the New York Yankees for an estimated eighty thousand dollars a year — roughly the cost of a present-day player’s gold necklace. The Chicago Cubs’ Ernie Banks was declared the National League slugging-percentage champion with an average of .616 and a record of twenty-four doubles, eleven triples, and forty-seven home runs. He beat out Willie Mays, Hank Aaron, and Stan Musial.

Seven photographs spill out of the bundle. The first is a color photo of David and me watching television. We are lying on our stomachs and holding our chins in our palms. We each have the same short haircut, and I am already wearing thick glasses. The picture must have been taken before I reached puberty, because my skin is not yet a moonscape. Judging by the expression on my face, I am totally engrossed in an episode of Combat or Petticoat Junction or Rowan and Martin’s Laugh-In, foreshadowing many hours of television-watching to come. The remaining photos, in brilliant black and white, show me mostly between the ages of two and ten. There I am, driving a toy tractor at the age of three; opening Christmas presents in 1959; standing next to a giant snowman outside our Hyde Park apartment; sitting on a bed with David and two Asian girls; tinkering with a guitar, trying to finger a D chord; dressed like Daniel Boone with a coonskin hat, a cap gun jammed into my jeans, and a broomstick for a rifle. I cannot imagine what I was thinking when any of these photos were taken.

At the bottom of my mother’s box is a note: “Dear Stephen, still sorting, tossing, and saving papers. Found copies of some excerpts from the High Holiday Prayer Book. Thought you might enjoy the beautiful, poetic flow of the prayers. These excerpts are from the Yom Kippur (Day of Atonement) services. I highlighted some of my favorites.” The photocopied pages alternate between the Hebrew and the modern English translations.

And I will praise You with my life: for You have been my help, and in the shadow of Your wings I sing for joy.

Every Friday, Mom and my stepfather, Seymour, would stand before a small menorah in the corner of the dining room and recite their prayers. Sometimes they would light the seven candles. Sometimes they would sing softly in Yiddish. By then, I was a jaded adolescent with no respect for the sacred, but I knew enough to keep my opinions to myself and allow them their brief weekly moment of contemplation.

Our days are few and full of trouble.

I left home at seventeen, never to return for more than a week at a time. David was the son who stayed close by. I haven’t been home for Thanksgiving in twenty years. Holidays, birthdays, anniversaries — I’ve missed them all. Months have gone by between phone calls. My familial debts are huge.

The eye is never satisfied with seeing; endless are the desires of the heart. We devise new schemes on the graves of a thousand disappointed hopes. . . . Our life, at its best, is an endless effort for a goal we never attain.

What was I looking for in the small towns of Colorado and Idaho? Mountains, I tell myself. Rivers. Shining golden sunsets. Trails that led into wilderness. The space to think. The strength that comes from solitude. I found all of this, and also fatherhood, divorce, poverty, remarriage, and, ultimately, maturity. Twenty-five years have passed, not just for me, but for the family I left behind.

We are feeble; we live always on the brink of death. Scarcely ushered into life, we begin our journey to the grave.

Several years ago, at three in the morning, I lay asleep on an old couch in my run-down apartment, recovering from hernia surgery. Just two days before, a surgeon had pushed my intestine back in and sewed a mesh screen over the spot to hold it in place. I was in a lot of pain. The phone rang, and my mother screamed, “Seymour is dead!” He was lying in their bed, she told me, dead of a heart attack. She had slept beside him all night, not knowing until she felt his cold skin.

I didn’t attend the funeral. This time, I had a good excuse — stitches and a doctor’s order not to carry luggage. But no one expected I’d show, anyway. Still, it was my number my mother dialed first, even before she called 911.

Success and failure, love and hatred, pleasure and pain mark our days from birth to death. We prevail, only to succumb; we fail, only to renew the struggle.

The mountains are still here, but the forests have fallen to greed. The rivers — the ones that aren’t dammed and silted — still run. There are actually more designated wilderness areas than when I arrived, but they are managed to the brink of tameness. Many undiscovered trails call to me, but my ambitions have narrowed to walks around the block.

My mother will be seventy soon. My daughter left home last summer to begin her life’s journey. My brother’s daughter will leave for college next year. My nephew in high school just became an Eagle Scout. I hardly know them. How do you atone for absence? How do you find a path home when, all your life, you’ve been moving in the opposite direction?

Here is the last passage my mother has marked:

Let us treasure the time we have, and resolve to use it well, counting each moment precious — a chance to apprehend some truth, to experience some beauty, to conquer some evil, to relieve some suffering, to love and be loved, to achieve something of lasting worth.

Stephen J. Lyons [“Time Past, Time Remaining,” May 1999] writes well and handles his subject matter expertly. It breaks my heart, however, that he still has not heard his mother’s plea for a visit from him. All he has to do is go home. He will regret it if his mother dies and he never made the effort to see her while she was still alive and longing for him. 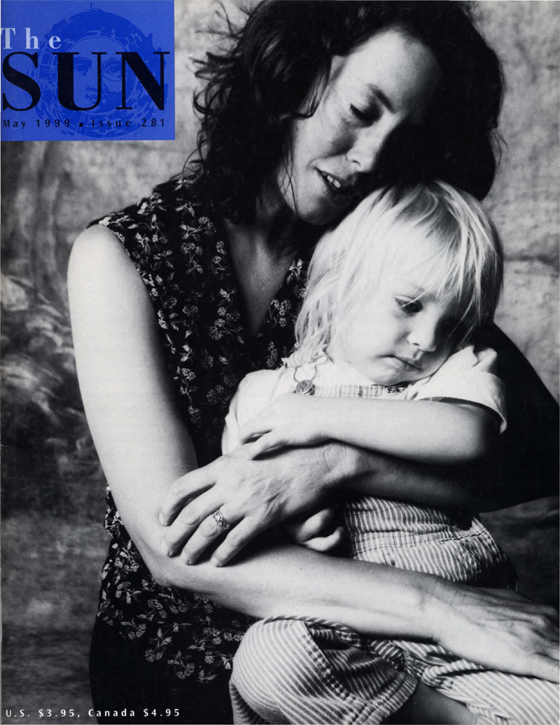 For No Good Reason

When My Best Friend’s Boyfriend Died, By Taffy Smyth